Own the Future: A True Cure for an Ailing Economy

Guest Blog by Gary Reber
Michael Bloomberg has penned an editorial column in which he calls for embarking on the largest public investment in infrastructure in generations, with government issuing new money to finance this. This money will be backed, as it is today, by government debt, repayable with future taxpayer dollars.


Under Bloomberg’s long-term plan, projects would be initiated to build the clean energy economy our country needs. The projects would include major new investments in wind and solar power, a national energy transmission grid, energy efficiency for buildings, and the electric-vehicle manufacturing industry, which will benefit U.S. automakers.
As with all past taxpayer-supported government stimulus programs, the advocates, including, in this case, Bloomberg, argue support for such investments to create millions of new jobs, including for many Americans who lose work in industries impacted by globalization and tectonic shifts in the technologies of production. While it will take years to complete such projects, Bloomberg argues, and I agree, “the act of investment — and putting people to work — sends exactly the kind of signal to the marketplace that our country will need.”
What’s missing? –– Who should own the new productive capital assets the taxpayer-funded projects will create? It will not (and should not) be our government who will “put the shovels in the ground” but private sector companies who will be awarded contracts. While the investment in private sector companies will definitely result in the creation of jobs for anyone able to work, what is missing in Bloomberg’s editorial is how will the owners of the companies awarded contracts benefit?
Throughout our history, taxpayer-supported stimuli have concentrated capital asset ownership and further enriched, via ownership, the wealthy capital asset ownership class, who become the employers of the workers needed to execute the projects contracted. Typically, the workers are excluded from gaining ownership stakes in the companies that employ them and have only their wage earnings to show for the bailouts by taxpayers (meaning themselves). Other non-owning citizens are completely excluded from sharing in the economic growth they are financing with their tax dollars.
If I had campaigned for President, I would have outlined a comprehensive “Own The Future” plan that sets requirements for every citizen, workers included, to gain shares in the ownership of the new productive capital assets to be formed, and not just argue for job creation. The plan’s agenda would ensure that every citizen gain equal access to the means to acquire personal ownership stakes in the capital assets formed on an annual basis, and be rewarded with a new source of earnings –– full dividend payouts on their shares of for-profit corporations. 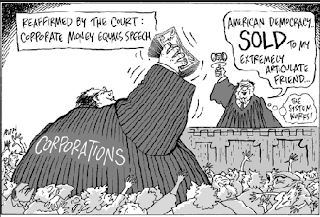 One component of the plan would be to dramatically raise the corporate tax to at least 90 percent with the caveat that full earnings paid out by a corporation to the owners of the corporation would be 100 percent tax deductible. While also eliminating all payroll taxes, this corporate deduction would eliminate the income tax on corporations and would tax all dividends paid out as personal income of the owners, along with wages, dividends, gifts and inheritances, and other sources of income. To grow, corporations would issue and sell new stock representing new capital asset formation. Incentivizing or requiring corporations to finance their growth by issuing and selling new stock would create opportunities to broaden capital asset ownership.
We certainly do not want to issue tax cuts in the way we did in the past as that would result in another major giveaway to corporate America and the top 1 percent. For example, a 2004 tax holiday designed to prompt corporations to bring home profits they had parked overseas was an idea to incentivize them to spend the money on jobs and domestic investment. Instead, the controlling owners of corporations spent the money on stock buybacks to benefit themselves and certain shareholders and fatten executive pay.
To pay for this broadly owned capital formation, I would have local commercial banks and the twelve Federal Reserve banks make insured, interest-free capital credit loans available on an annual and equal allocation basis to every child, woman and man for investment in the corporations growing our economy, both established companies and viable startups, with feasible growth projects including infrastructure and green energy development.
Such capital loans would be solely repayable with the full earnings of the investments paid down in pre-tax dollars out of what the assets underlying that stock yield. In this way, we can create new capital asset owners simultaneously with the growth of the economy and see EVERY citizen’s wealth portfolio grow annually as we build a responsible growth economy that protects and enhances our environment, and supports general affluence for every citizen. Not only would citizens benefit from a new source of income –– dividends –– but millions of jobs would result. 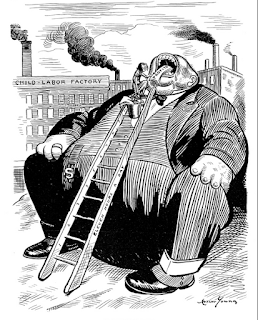 If Bloomberg’s plan is implemented, it will result in another major giveaway to the controlling owners of corporate America, sold solely on the basis that the investments would create jobs and stimulate further private sector investment. Furthermore, any funding that does not come from tax dollars will add to the already burgeoning government debt, as new government debt-backed money is created by the Federal Reserve and pumped into the economy.
In addition to reforming government tax policy and monetary policy, we need to design trade policy so that we decouple from our dependence on the slave-wage labor and unregulated, environmentally destructive policies of authoritarian, human rights violating countries, such as Communist China. As a result of trade policies sanctioned by previous governmental administrations, we are experiencing the disastrous impact of our reliance on such foreign entities and our shutting down of supply chain and finished goods and products manufacturing in our country. We now need to shift to massive investments in building up our own homeland manufacturing capabilities and renewed investment in the common good with a vision of social and economic justice, woven into the ways we interact with and care for one another.
Simultaneously, and this is extremely important, we must empower EVERY child, woman and man to gain personal ownership stakes in the viable growth projects to be carried out by both established corporations and viable startups. Thus, the policy direction from now on needs to create new owners of productive capital assets simultaneously with the responsible expansion of the economy, ensuring both protection and enhancement of our environment. This will entail reform of our monetary system, tax laws and trade policies.
An emergency and challenge lie before us. We need leaders who will step up and advocate for this paradigm change in the structuring of our private property-based economic system, ensuring that EVERY citizen will own wealth-creating, income-producing capital asset property.
One aspect of the solution is the enactment of the proposed Capital Homestead Act (aka Economic Democracy Act and Economic Empowerment Act). And The Capital Homestead Act brochure, and Capital Homestead Accounts (CHAs).
Also support the Agenda of The JUST Third WAY Movement (also known as “Economic Personalism”).
And support Monetary Justice at http://capitalhomestead.org/page/monetary-justice.
For an in-depth overview of solutions to economic inequality, see my article “Economic Democracy And Binary Economics: Solutions For A Troubled Nation and Economy.”
Gary Reber is the founder and Executive Director of For Economic Justice (www.foreconomicjustice.org), and an advocate and author for economic justice through broadened ownership of wealth-creating, income-producing physical productive capital. Mr. Reber is a board member of the Center for Economic and Social Justice (CESJ) and a founding member of the Coalition for Capital Homesteading. Mr. Reber founded with binary economist Louis Kelso, Agenda 2000 Incorporated in 1967 to advocate policies and programs to broaden productive capital ownership in urban development projects.