Should we mention the stock market gyrations and the effect of the corona virus?  No.  If we do, we’ll just be wrong, as the situation changes so fast that there’s no way to be accurate except in hindsight.  We’ll just ask if you really need that much toilet paper?  Otherwise, let’s see what’s happening on the Just Third Way front:


• The Safe Candidate.  Although we generally refrain from commenting on partisan politics (and it all seems to be extremely partisan these days), our assessment of the contenders for the Democratic nomination is that Joseph Biden would be the “safe” candidate from the Democratic view, while Bernie Sanders would be the “change” candidate from any point of view.  Neither appears to have what it takes to unseat an incumbent with an entrenched base of support.  In our analysis, Biden — as the “safe” candidate — would be highly unlikely to adopt the Just Third Way.  It’s too radical, and he can’t afford to alienate his base of support.  Donald Trump, of course, as incumbent “knows” that he is right and is unlikely to adopt anything that differs from what he clearly regards as a formula for success.  That leaves Sanders . . . who may be too wedded to socialism (whatever he chooses to call it) to consider something truly radical and yet far more conservative than anything currently in place on planet Earth.  True, Sanders has been a strong supporter of Employee Stock Ownership Plans (ESOPs), but it’s not entirely clear for what reason.  The ESOP is not an end in itself, but a beginning, the first step in Louis Kelso’s vision of achieving a society in which not only everyone prefers to own capital, but has access to the means of doing so.
• Leland Stanford.  It turns out that the “Robber Baron” Leland Stanford, railroad magnate, organizer of the Republican Party of California in 1856, eighth governor of California, U.S. Senator, and founder of Stanford University, was also a supporter of worker ownership!  It seems that Stanford was a fairly typical, if also fairly honest, member of the wealthy élite of his day.  Something of a hypocrite in racial issues (he disparaged Asian immigration as allowing inferior people in while at the same time importing workers from China to build his railroads) he nevertheless supported worker ownership (albeit on a small scale, i.e., not cutting them in on a piece of what he owned) for more than thirty years before giving them expression in his plans for Stanford University, proposals as a U.S. Senator, and interviews with the press.  Still, nobody is perfect, and Stanford’s proposals warrant further investigation.  There appears to be no relationship between Stanford and his near-contemporary, Judge Peter S. Grosscup, who advocated the “people-ization” of U.S. corporations through a national law of corporations and widespread ownership in the early twentieth century.
• Grosscup Investigated.  Speaking of Judge Grosscup, he was a “progressive” back when that was a good thing, and a supporter of Theodore Roosevelt, being one of TR’s “Trust Busters” . . . until he ticked off the Rough Rider by overturning the Standard Oil rebate case on a point of law when the president wanted Rockefeller tried and fried.  It seems that in 1909, as soon as Roosevelt was out of office, certain elements in the Republican Party hired a detective to dig up dirt on Grosscup.  They tried to hang a number of things on the Judge, but there was never anything substantive.  Finally, he resigned in 1911 when the accusations became outrageous and clearly politically motivated (there were also tragedies in his personal life, a son-in-law committed suicide and other things, which provided fodder for the movement to unseat him).  A year later he made up with Roosevelt and endorsed him as the Progressive Party (“Bull Moose”) candidate in the 1912 presidential election. 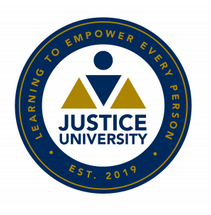 • The End in Sight?  Yes, we’ve said it before — and meant it — but this time the new book might actually be almost ready to go.  With the title Freedom, Power, and Dignity: Charting the Just Third Way of Economic Personalism (which may survive this final round of editing), the relatively short book takes a look at the rise of the “new things” of socialism, modernism, and the New Age and efforts by the leaders of the Catholic Church and others to counter them.  There is a heavy reliance on original sources, and CESJ was given access to the papers of a former Vatican journalist who also worked with the Solidarity Movement in Poland.  The book will probably be published under the new “Justice University Press” imprint of CESJ.
• Shop online and support CESJ’s work! Did you know that by making your purchases through the Amazon Smile program, Amazon will make a contribution to CESJ? Here’s how: First, go to https://smile.amazon.com/.  Next, sign in to your Amazon account.  (If you don’t have an account with Amazon, you can create one by clicking on the tiny little link below the “Sign in using our secure server” button.)  Once you have signed into your account, you need to select CESJ as your charity — and you have to be careful to do it exactly this way: in the space provided for “Or select your own charitable organization” type “Center for Economic and Social Justice Arlington.”  If you type anything else, you will either get no results or more than you want to sift through.  Once you’ve typed (or copied and pasted) “Center for Economic and Social Justice Arlington” into the space provided, hit “Select” — and you will be taken to the Amazon shopping site, all ready to go.
• Blog Readership.  We have had visitors from 33 different countries and 44 states and provinces in the United States and Canada to this blog over the past week. Most visitors are from the United States, India, Canada, the United Kingdom, and Uganda.  The most popular postings this past week in descending order were “Stewardship,” “Thomas Hobbes on Private Property,” “Fulton Sheen on the Crisis,” “News from the Network, Vol. 13, No. 9,” and “Social Justice IV: The Characteristics of Social Justice.”
Those are the happenings for this week, at least those that we know about.  If you have an accomplishment that you think should be listed, send us a note about it at mgreaney [at] cesj [dot] org, and we’ll see that it gets into the next “issue.”  Due to imprudent language on the part of some commentators, we removed temptation and disabled comments.
#30#