With the stock market bouncing around like a rubber ball and the rest of the news almost completely focused on the pandemic, it’s hard to find news items directly related to the Just Third Way.  That is why we’re not going to do it: 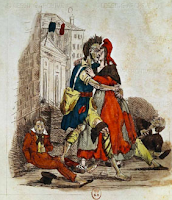 • Just Third Way Around the World.  Outreach is continuing to introduce world leaders (or, at least, people who are acquainted with or have some connection to world leaders) to Just Third Way concepts and possible applications.  Recent outreach has gone out to people in Germany, France, Slovakia, Lithuania, Hungary, Belgium, the Netherlands, Austria, Italy, the Vatican, and even Russia.  The information shows how the Just Third Way of Economic Personalism might be applied to ameliorating the economic effects of the Covid-19 pandemic, and lay the groundwork for a subsequent restructuring of national economies and even the global economy.  A few thoughts have been developed that are in the process of being fleshed out, e.g., tying aid to a business to turning workers into shareholders, leading in to making every citizen an owner.
• “Horrific” Jobs Report and Wall Street.  It’s always possible that the gamblers of Wall Street didn’t realize the significance of the “horrific” jobs report that was just released.  The Dow shot up in a fantastic surge that gave hope to millions unable to distinguish between the real, productive economy and the secondary stock market.  In a modern Keynesian economy in which most people’s income is tied to wages or welfare instead of capital ownership, unemployment is an unmitigated disaster . . . if only because if people aren’t producing something of actual value (even for someone else for wages), there is nothing to consume.  Government can print up all the money it wants and redistribute via the “hidden tax” of inflation, but if nothing is produced to redistribute, all the government is doing is dividing up a shrinking pie into smaller and smaller pieces.  If the government divides it faster than the pie is shrinking, prices go up . . . combining with the increased upward pressure as supplies go down.  At some point, this triggers “hyperinflation,” which is not merely high, even staggeringly high inflation, but the surreal phenomenon in which the price level rises faster than money can be created!  Of course, reorienting the income source for most people away from wages and back to capital would refocus attention where it belongs: on production and the opportunity and means for each person to be productive . . . but that means abandoning Keynesian economics and its obsession with “full employment” and adopting the Just Third Way.
• Temporary Retirement Reforms.  Although a case could easily be made for making them permanent, the IRS has temporarily lifted tax penalties for early withdrawal from 401(k)s, and is — temporarily — suspending Required Minimum Distributions for people who have reached age 71½.  What is needed, of course, is a major overhaul of U.S. retirement law that shifts it from a “wage mentality” to an “ownership mentality.”  Currently, official policy is that everything in a qualified retirement plan constitutes “deferred compensation.”  That is why contributions to a qualified plan are recognized as expenses by a plan sponsor, or exemptions from income for participants and beneficiaries, and as taxable income when distributed.  The assumption is that all qualified plan assets will be distributed as taxable income, with nothing left at death.  The Capital Homesteading concept is that income generating assets will be accumulated on a tax-deferred basis, paid for out of the earnings on the assets themselves, and then the earnings distributed as taxable income.  The accumulated assets will be retained to continue generating income until the death of the “Capital Homesteader,” at which time the accumulated assets will be distributed to the heirs and taxed as regular income, unless rolled over into the recipient’s Capital Homestead Account.
• Another Slight Delay.  Another short delay has been experienced with the publication of Dignity, Power, and Freedom over the resolution of some editorial questions.  Nothing to worry about.  Unless you’re waiting for the sequel. . . .
• Shop online and support CESJ’s work! Did you know that by making your purchases through the Amazon Smile program, Amazon will make a contribution to CESJ? Here’s how: First, go to https://smile.amazon.com/.  Next, sign in to your Amazon account.  (If you don’t have an account with Amazon, you can create one by clicking on the tiny little link below the “Sign in using our secure server” button.)  Once you have signed into your account, you need to select CESJ as your charity — and you have to be careful to do it exactly this way: in the space provided for “Or select your own charitable organization” type “Center for Economic and Social Justice Arlington.”  If you type anything else, you will either get no results or more than you want to sift through.  Once you’ve typed (or copied and pasted) “Center for Economic and Social Justice Arlington” into the space provided, hit “Select” — and you will be taken to the Amazon shopping site, all ready to go.
• Blog Readership.  We have had visitors from 46 different countries and 44 states and provinces in the United States and Canada to this blog over the past week. Most visitors are from the United States, Canada, Spain, India, and Australia.  The most popular postings this past week in descending order were “How to Argue With a Socialist (If He is G.B. Shaw),” “Own the Future: A True Cure for an Ailing Economy,” “News from the Network, Vol. 13, No. 12,” “How Not to Stimulate an Economy,” and “Book Review: A Field Guide for a Hero’s Journey.”
Those are the happenings for this week, at least those that we know about.  If you have an accomplishment that you think should be listed, send us a note about it at mgreaney [at] cesj [dot] org, and we’ll see that it gets into the next “issue.”  Due to imprudent language on the part of some commentators, we removed temptation and disabled comments.
#30#