As a few of you may know (and even fewer care), I attended the University of Notre Dame du Lac in northern Indiana in the late 1970s.  I was in the Notre Dame Glee Club for four years under Dr. David Clark (“Coach”) Isele, majored in Accounting, and managed to graduate, going on to get my MBA at the University of Evansville, Indiana.  Eventually I became Director of Research for the interfaith Center for Economic and Social Justice (CESJ) in Arlington, Virginia. 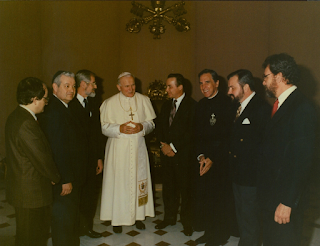 CESJ’s Core Values, Code of Ethics, principles, and programs are based on an Aristotelian-Thomist understanding of natural law, Pope Pius XI’s breakthrough in moral philosophy with the discernment of a particular “act of social justice” as analyzed by CESJ co-founder, the late Father William J. Ferree, S.M., Ph.D. (president of Chaminade College-Now-University in Honolulu, rector of the Pontifical Catholic University of Puerto Rico, and chairman of Dayton University), and the binary economics of Louis O. Kelso.  CESJ’s work has been praised by President Ronald Reagan and received the personal encouragement of His Holiness Pope Saint John Paul II during a private audience with members of Polish Solidarity, as well as a long list of clergy of other faiths as well as politicians from both sides of the aisle, at least when they were still speaking to one another. 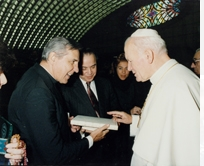 Our book, Curing World Poverty: The New Role of Property (1994), for which I was a contributing author and served as assistant editor, grew out of a seminar we presented at the Vatican for heads of religious Orders, and was hosted by His Eminence Achille Cardinal Silvestrini.  Curing World Poverty was published by the Social Justice Review, the official journal of the Central Bureau of the Catholic Central Union of America in St. Louis, Missouri, and sold enough copies (5,000) to qualify as a “small press bestseller,” not exactly Harry Potter, but nothing to sneeze at, either.  These and other things are described in CESJ’s “Accomplishments Brochure.”
So why isn’t this more widely known?
Quick answer: As I will show in a couple of books that are scheduled for publication later this summer (one on “economic personalism” and one on what the heck happened to social justice), the general understanding of natural law (and thus Catholic social teaching and that of other faiths and philosophies based on the Aristotelian understanding of natural law) has been subverted by a paradigm of thought loosely defined by the labels socialism, modernism, and the New Age — the “new things” (rerum novarum) noted by Pope Gregory XVI in 1834 in the second social encyclical, Singulari Nos, and referenced by Pope Leo XIII in 1891 in his encyclical on labor and capital.
In plain English, that means people who pit their personal faith against reason.  Less plainly, moral relativism has taken over as the result of a shift from the Intellect to the Will, creating a situation in which might makes right, so that a forceful false opinion trumps objective knowledge that is empirically valid or logically consistent.
CESJ’s “Just Third Way” based on objective reason and empirical evidence does not fit into preconceived notions based on subjective faith, and so tends to be rejected out of hand without being given a fair hearing — or any hearing at all, for that matter.
More involved answer: Academia, especially Catholic Academia, is morally bankrupt.
Now, that requires a little explanation.  I am not just echoing others who have come to the same conclusion for one reason or another.  My conclusion is based on personal experience and a number of attempts to interact and dialogue with academics at various institutions, both religious and secular.  Not all institutions of higher learning, certainly.  One in particular (that I will not name to protect the innocent) has been very open.
Because it is my alma mater, however, three experiences with Notre Dame proved especially disappointing — and you have to have experienced some aspect of the spirit of Notre Dame to understand just how deep and bitter that kind of disappointment is for an alumnus to admit.
I relate these experiences in general terms as an example of how what many (most of them admittedly alumni) consider the premier Catholic university in the world has fallen from the position it once held.  It would also probably lead to reprisals of some kind were I to name names, which would serve no purpose other than to confirm me in my opinion, in addition to making life very miserable for some fellow “Domers.”  I assure you, however, that these experiences took place, and I have the hard evidence sitting in front of me as I write this: