As they say, even a broken clock is right twice a day, the implication being that not even something inherently wrong is always wrong in its conclusions.  That is something capitalists and socialists — and MMT theorists — would do well to remember.


What brought this on was one of our faithful readers finding an article on “Naked Capitalism,” a “pro-MMT” website, that as its title made the declaration, “Taxes for Revenue are Obsolete.”  What was particularly interesting was that the article was originally published in the January 1946 issue of American Affairs, and was by Beardsley Ruml, Chairman of the Federal Reserve Bank of New York.
Ruml opened his article with the statement, “The necessity for a government to tax in order to maintain both its independence and its solvency is true for state and local governments, but it is not true for a national government.”  And why is that?  Ruml had the answer: 1) National governments have central banks, while state and local governments do not, and a lot had been learned about how central banks can be used to finance government without taxation.  2) Convertibility of the currency into gold or any other asset is no longer an issue.
We can respond to both these reasons why taxation for revenue is not “obsolete.”  1) What has been learned about central banking is how a national government can circumvent the entire purpose of a central bank, something that is not in the power of a state or local government.
State and local governments are expressly prohibited under the U.S. Constitution from “emitting bills of credit.”  That is constitutional language for “create money.”  No state or local government can create money, and therefore cannot owe more than it can borrow (which is still quite a bit of money).
The federal government on the other hand has no specific power to emit bills of credit — the language permitting that was removed from the enumerated powers during the constitutional debates.  If you are a strict constitutional constructionist, you would necessarily conclude that the federal government cannot create money, either — which, if you read the debates, is precisely what the framers of the Constitution meant. 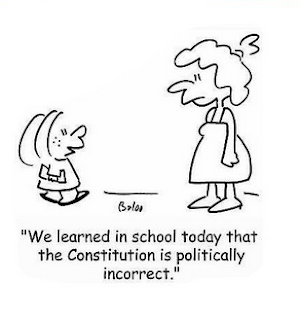 If, however, you are an adherent of the “living Constitution” theory, the federal government can do any damn’ thing it wants as long as the Supreme Court can twist the interpretation of the Constitution to mean what it wants.  So what Ruml claimed was a new understanding of central banking was really just an old theory of constitutional law applied to allowing the federal government to monetize its own debt.
2) Any currency should be convertible into some kind of asset on demand, and be backed by assets.  Convertibility gives confidence.  By taking away convertibility, people become suspicious that maybe the currency really isn’t worth anything, and the whole thing may be a con game.  Gold is actually not the best thing for a standard, but that’s not the point here.  By removing any tie to a hard asset (a government that backs its own currency with its own debt is backing it with a liability, not an asset. . . .), a government gets a free hand in how much it can spend.  It only needs to create as much money as it can force on the public.
In other words, under MMT taxation is unnecessary for the purpose of raising revenue because government can simply create whatever money it needs by emitting bills of credit which are purchased by the central bank and used to back new issues of currency or new demand deposits.
This, of course, raises the obvious question, If governments don’t need to tax to raise revenue, why tax at all?  Not surprisingly, that same question occurred to Dr. Harold G. Moulton, president of the Brookings Institution from 1928 to 1952, who published a short pamphlet three years before Ruml’s article appeared . . . and which was itself a response to a pamphlet Ruml published early in 1943.  As Moulton said,
The implications of the new philosophy of public debt from the point of view of taxation are engaging.  If the growth of the public debt is of no moment, one might at first thought be inclined to ask — Why go to all the trouble and expense of collecting taxes?  Why burden the public with ever-increasing levies?  Indeed, if the purpose of fiscal policy is not to balance the budget but to obtain the largest possible “net income-creating” expenditures — as measured by the size of the cash deficit — why not promote the desired end by canceling all taxes? (Harold G. Moulton, The New Philosophy of Public Debt.  Washington, DC: The Brookings Institution, 1943, 71.)
Ruml was able to answer the question, however.  As he said under the heading, “What Taxes Are Really For”:
1. As an instrument of fiscal policy to help stabilize the purchasing power of the dollar;
2. To express public policy in the distribution of wealth and of income, as in the case of the progressive income and estate taxes;
3. To express public policy in subsidizing or in penalizing various industries and economic groups;
4. To isolate and assess directly the costs of certain national benefits, such as highways and social security.
This is such a huge can of worms that we’ll take it up in the next posting on this subject.
#30#
Posted by Michael D. Greaney at 6:00 AM