In preparation for a discussion on the natural law principles underlying religious social teaching (as opposed to religious faith-based teaching), we’ve been re-reading Mortimer Adler’s 1990 book, Truth in Religion: The Plurality of Religions and the Unity of Truth (New York: Scribner and Sons).  As Adler argued, there are certain philosophical and natural law principles that are common to almost all religions, and are true, regardless of the truth of a religion’s purely faith-based teachings.


Among the more obvious truths such as don’t lie, cheat, or steal, there is the presumption in “western” religions (not knowing enough about “eastern” religions, we can’t make the same claim one way or another) that the actual, flesh and blood human person is of supreme importance, relatively speaking, and in comparison to the abstraction of humanity or the collective.  Thus (for example), it is never permissible to condemn an innocent person to death, regardless of the presumed advantages that will accrue to a large number of people as a result; it is not “expedient for you that one man should die for the people and that the whole nation perish not.” (John 11:50.)
This is not “religion.”  It is simple justice, the highest natural virtue.  It is unjust for anyone who has done nothing wrong to be punished, even if you think it means the end of the world if you don’t.  That remains so, even though the fate of the world is rarely at stake.  Usually it means someone’s power or property might be threatened if they don’t get rid of an inconvenient, albeit innocent, person.
Not surprisingly, it is also wrong to punish someone who is innocent if something less than the fate of the world is at stake.  For example, the most intellectually rigorous (although still fatally flawed in its logic) defense of slavery in the United States was David Christy’s 1855 book Cotton Is King.
As Christy argued, the economic survival of the British Empire and the United States depended absolutely on the cultivation of cotton by slaves.  He admitted it was a horrifying and unjust system.  But it was justified even though unjust (we told you it was fatally flawed in its logic) by the fact that it is impossible to grow cotton without slave labor (did we mention that Christy’s logic was fatally flawed?).  As Christy concluded his argument,
King Cotton cares not whether he employs slaves or freemen.  It is the cotton, not the slaves, upon which his throne is based.  Let freemen do his work as well, and he will not object to the change.  Thus far the experiments in this respect have failed, and they will not soon be renewed. . . . His Majesty, King Cotton, therefore, is forced to continue the employment of his slaves; and, by their toil, is riding on, conquering and to conquer!  He receives no check from the cries of the oppressed, while the citizens of the world are dragging forward his chariot, and shouting aloud his praise!
But what if a “condition of dependency” is imposed on people for their own good?  What if people are unable to obtain adequate food, clothing, shelter, healthcare, education, or anything else by their own efforts?  What would happen to them if someone, such as the State, did not make adequate provision for all of their needs?  Isn’t that why parents look after children, and the State institutes welfare programs?
Yes, it is.  It is also why Ol’ Massa kept slaves: those people couldn’t look after themselves, so they needed an owner who, out of the goodness of his heart, took care of them and trained them to enter society as fully functioning and virtuous adults . . . right?

Oddly enough, however, few slaves ever learned how to be free adult members of society out in the field picking cotton, any more than most of today’s welfare recipients ever seem to move on to become self-supporting standing in line or waiting by the mailbox to receive a check.  Whether people are prevented or discouraged from doing something, the fact remains that only the most extraordinary individuals will be able to get themselves out of dependency by their own efforts, just as most children aren’t able to raise themselves.
That is why we paid special attention to a question a reader sent us on the subject of subsidiarity.  As the reader said,
A person I know claims that the following applications of the principle of subsidiarity.  What do you have to say about that claim?  I would like to respond and would appreciate your thoughts on the matter.  Perhaps this is also subject matter for one or more of your blogs.
Then followed the claims that someone was making regarding the presumed applications of the principle of subsidiarity, which we’ve edited slightly for clarity as well as corrected for spelling and grammar: 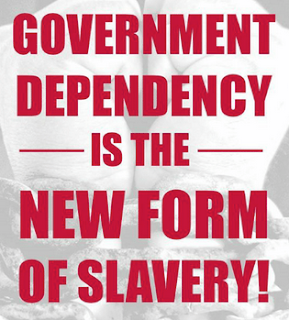 Permit me to give three examples of the (non-socialist) subsidiarity principle applied to legislation: ARA, ACA, CPP.  These were signature measures in which states were given the power to decide how they achieved a national goal.
America Recovery Act (ARA) sought local and municipal projects which would stimulate the economy but were under the administration of those entities.
Affordable Care Act (ACA) gives states options for how they administer the act, while meeting HHS regs & guidelines, including an expansion of Medicaid. A state assembly could/can adopt the federal approach if they chose not to build their own.
The Clean Power Plan (CPP) was the EPA means of complying with the Supreme Court decision on CO2 emissions as part of it clean air mandate. After the public comment period for relevant stakeholders and citizen, each state was compelled to publish a plan to reduce fossil fuel energy generation by a target date. States were free to develop their own plan or they could adopt a federal model plan, with local modifications.
All three measures are examples of setting a national goal but implementing it at levels of state, municipal and city government. That’s subsidiarity, not socialism.
We disagree that the cited pieces of legislation are applications of the principle of subsidiarity.  That’s one issue.  They are, frankly, socialist — which is another issue, albeit a related one.
Our primary interest today, however, is subsidiarity, a concept from Catholic social teaching, although not really a “religious” issue (hence our little discussion with which we began this posting).  That means to be able to comment on it intelligently, we are going to have to drag religion into the discussion, or at least make reference to certain natural law principles found in Catholic social teaching. 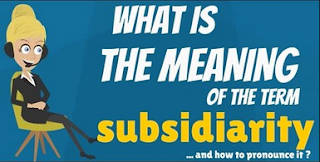 First, we need to correct a misunderstanding of subsidiarity.  Subsidiarity is not a principle to determine which governmental level or unit does something, or the idea that the government does what an individual cannot do for himself.  It is a question of which level of the common good is the most appropriate level, the lowest possible level — that of the individual person — being preferable.
In general, as Catholic social teaching is primarily concerned with human dignity and the sovereignty of the human person under God, it is inappropriate for any level of government to do what individuals, either alone or in free association with others, can do for themselves.  Even then, the first recourse of the State at any level is to remove barriers that prevent individual or group action instead of taking over the function, which is contrary to the “laws” of social justice.
Only as an absolute last resort is the State to make provision for individual goods, and then only so long as is necessary to remove the barriers that prevent people from doing for themselves.   In each of the examples given, there are private sector alternatives available or possible, so it is contrary to the principle of subsidiarity as well as social justice for the State to impose a presumably permanent solution to the exclusion of the private sector.
That is the quick and dirty response.  We’ll start to look at a more complete discussion as to why it is improper for the State to provide for people’s needs as a usual thing in our next posting on this subject.
#30#
Posted by Michael D. Greaney at 6:00 AM