After many trials and tribulations of a computerized nature, here are this week’s news items:

• CESJ Annual Celebration.  The Thirty-fifth CESJ Annual Celebration begins tomorrow.  The event will take place at CESJ headquarters in Arlington, Virginia, and will feature a program initiating Justice University, planned as the first of many such programs.  Participants will receive a certificate of completion.  After the program, rumor has it there will be a special award during the day for a CESJ member who has gone beyond the call of duty as a regular thing.
• Another Smoking Gun?  Recent research has revealed that the work of classical economist David Ricardo provided the theoretical basis for both capitalism and socialism.  It turns out that Ricardo’s “Labor Theory of Value” and his monetary theory based solely on past savings — both of which were intended to correct the theories of Adam Smith — in tandem justify concentration of capital ownership in as few hands as possible.  The only question is whether the ownership is in the hands of a private sector élite, or in some form of the collective.  Interestingly, Ricardo was involved in a proposal to establish a community in England to put into effect the theories of Robert Owen, considered by many to be the first true British socialist.  When the proposal failed to bear fruit, Owen decided to try the experiment in the United States, where there would presumably be no constraints on implementing the full program, which (according to Owen’s notorious “Declaration of Mental Independence” speech delivered July 4, 1826 in New Harmony, Indiana, the community Owen established not far from Evansville, Indiana) required the abolition of private property, the abolition of organized religion, and the abolition of marriage and family.  When New Harmony failed soon after, Owen moved back to England and attempted a number of other utopian and socialist projects.
• John Henry Cardinal Newman and Robert Owen.  It is not generally known, but John Henry Cardinal Newman’s brother Charles became a follower of Robert Owen.  This may have added to John Henry’s suspicion of political and religious liberalism, fueling his enthusiasm for the Oxford Movement, of which he was one of the acknowledged heads.  The fact that religious and political liberals along with a group of Christian socialists sabotaged the Oxford Movement may have helped persuade Newman to leave the Church of England after rising to become one of its brightest lights.
• Democracy in America.  Also of interest is the correlation between Alexis de Tocqueville’s categorization of the types of liberal democracy into European, English, and American, and socialism, capitalism, and personalism. 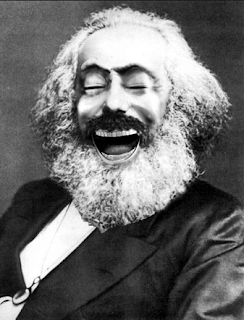 • Shop online and support CESJ’s work! Did you know that by making your purchases through the Amazon Smile program, Amazon will make a contribution to CESJ? Here’s how: First, go to https://smile.amazon.com/.  Next, sign in to your Amazon account.  (If you don’t have an account with Amazon, you can create one by clicking on the tiny little link below the “Sign in using our secure server” button.)  Once you have signed into your account, you need to select CESJ as your charity — and you have to be careful to do it exactly this way: in the space provided for “Or select your own charitable organization” type “Center for Economic and Social Justice Arlington.”  If you type anything else, you will either get no results or more than you want to sift through.  Once you’ve typed (or copied and pasted) “Center for Economic and Social Justice Arlington” into the space provided, hit “Select” — and you will be taken to the Amazon shopping site, all ready to go.
• Blog Readership.  We have had visitors from 28 different countries and by coincidence 43 states and provinces in the United States and Canada to this blog over the past week. Most visitors are from the United States, South Africa, Canada, the United Kingdom, and Australia.  The most popular postings this past week in descending order were “Easter Witness and a Proposal for Ireland,” “News from the Network, Vol. 12, No. 16,” “Things Are Seldom What They Seem,” “The Age of Aquarius,” and “The Purpose of Production.”
Those are the happenings for this week, at least those that we know about.  If you have an accomplishment that you think should be listed, send us a note about it at mgreaney [at] cesj [dot] org, and we’ll see that it gets into the next “issue.”  If you have a short (250-400 word) comment on a specific posting, please enter your comments in the blog — do not send them to us to post for you.  All comments are moderated, so we’ll see it before it goes up.
#30#
Posted by Michael D. Greaney at 6:00 AM