Apparently at least one person on Earth is offended by the United Nations Declaration of Human Rights, specifically Article 17: “(1) Everyone has the right to own property alone as well as in association with others. (2) No one shall be arbitrarily deprived of his property.”  We suspect that some offended people don’t know what property is, may not be too clear on the fact that “everyone” includes “everyone,” or maybe just got up on the wrong side of the bed this century.  In any event, here are a few tidbits of news from around the network:


• Socialism and Early America.  On July 4, 1826, Robert Owen, re-founder of the utopian settlement of New Harmony, Indiana, gave a speech entitled, “A Declaration of Mental Independence.”  As he declared, the American Revolution had gained people political independence, but there were three great evils remaining to be abolished.  In order these were 1) private property, 2) organized religion, and 3) marriage.  Owen was possibly the most influential English socialist before he left England in the 1820s after purchasing New Harmony from the Rappites.  Charles Newman, brother of John Henry Cardinal Newman, converted to the Owenite doctrines, which appears to have increased John’s suspicion of the “New Christianity” that had virtually taken over the Church of England and that first supported and then opposed the Oxford Movement.  Machinations by the New Christians eventually led Newman to investigate the claims of the Catholic Church and convert.  Along with the ideas of other socialists such as Henri de Saint-Simon, Charles Fourier, Félicité de Lamennais, Étienne Cabet, and others such as Henry George, some of Owen’s ideas were embodied in the social movements that led to the development of Fabian socialism and came to partial fruition in the New Deal. 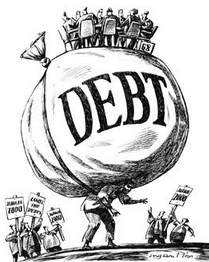 • Government Debt and Economic Growth?  A standard doctrine taught in college economics classes is that you need to increase government debt in order to have economic growth.  How this explains the phenomenal growth of such countries as the United States in the nineteenth century when you had very little government debt, relatively speaking.  Taking land from the Indians and slavery do not account for it, for developing the land and exploiting other human beings still requires financing.  Still, as an article in Monday’s Wall Street Journal claims, “Spending Fight Casts Cloud on Growth” (04/08/19, A2) if the federal government reduces spending, economic growth will fall off.  Of course, if they were really serious about growth, they would back the money needed for growth with private sector assets, not government liabilities, and create new money in ways that creates new owners of those assets . . . but perhaps that makes too much sense.
• Rage Against Private Property.  Advocating widespread capital ownership, or even explaining what private property really is, seems to excite an almost pathological reaction among some people who claim they are in favor of widespread capital ownership.  The problem is that a number of people who think they are experts aren’t too sure what property is, and having no response that makes sense, resort to personal attacks against anyone who defends private property or advocates expanded ownership in a way that is not collectivist.
• Just Third Way Offends FaceBook Community Standards.  Or not.  Earlier this week a comment on a blog posting precipitated a complaint that the Just Third Way has been deemed “offensive” to people.  On investigation the complaint was deemed groundless, but the readers of this blog can judge for themselves: 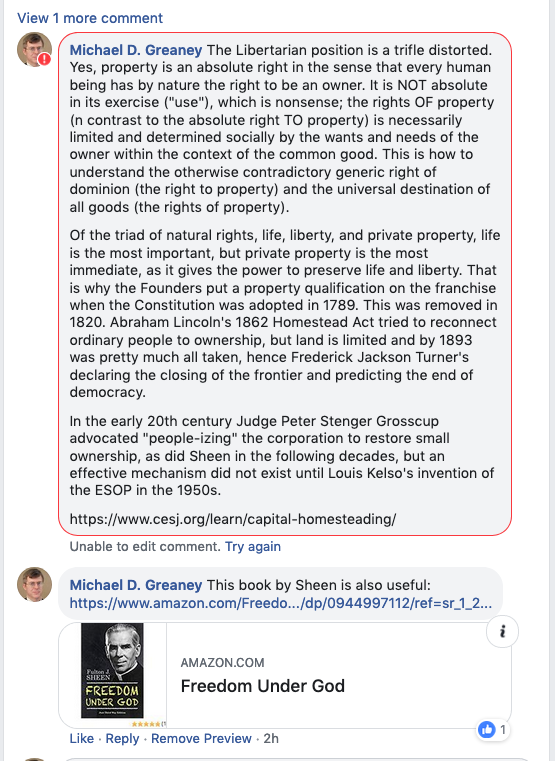 • Shop online and support CESJ’s work! Did you know that by making your purchases through the Amazon Smile program, Amazon will make a contribution to CESJ? Here’s how: First, go to https://smile.amazon.com/.  Next, sign in to your Amazon account.  (If you don’t have an account with Amazon, you can create one by clicking on the tiny little link below the “Sign in using our secure server” button.)  Once you have signed into your account, you need to select CESJ as your charity — and you have to be careful to do it exactly this way: in the space provided for “Or select your own charitable organization” type “Center for Economic and Social Justice Arlington.”  If you type anything else, you will either get no results or more than you want to sift through.  Once you’ve typed (or copied and pasted) “Center for Economic and Social Justice Arlington” into the space provided, hit “Select” — and you will be taken to the Amazon shopping site, all ready to go.
• Blog Readership.  We have had visitors from 28 different countries and 45 states and provinces in the United States and Canada to this blog over the past week. Most visitors are from the United States, Canada, India, the United Kingdom, and Australia.  The most popular postings this past week in descending order were “News from the Network, Vol. 12, No. 14,” “Distributism, Socialism, and Syndicalism, What’s the Difference?” “How Finance Really Works in Theory,” “Thomas Hobbes on Private Property,” and “A Contradiction in Terms?”
Those are the happenings for this week, at least those that we know about.  If you have an accomplishment that you think should be listed, send us a note about it at mgreaney [at] cesj [dot] org, and we’ll see that it gets into the next “issue.”  If you have a short (250-400 word) comment on a specific posting, please enter your comments in the blog — do not send them to us to post for you.  All comments are moderated, so we’ll see it before it goes up.
#30#
Posted by Michael D. Greaney at 6:00 AM