Although differences and disagreements between people of different faiths and philosophies are nothing particularly new, they seem to be achieving much greater depths of depravity than ever before.  True, this might be merely the fact that with modern communications and the growing hunger of the popular media for sensation and scandal to titillate and entertain people who should have much better things to do, what was under the radar in former days is now the stuff of everyday life.


On the other hand (and far more likely), the social, political, economic, and religious earthquakes that have rocked the world for the past two centuries or so are not being effectively dealt with.  This has caused the rise of ideologies that, while lacking any real consistency, all have one thing in common.  That is a shift away from actual human persons and a focus on some abstraction, such as “humanity,” “the State,” “the poor,” or what have you.
This has fostered the invention and rapid spread of what Pope Gregory XVI back in 1834 referred to as rerum novarum, “new things,” in Singulari Nos, the second social encyclical.  Gradually adopting the loose labels of socialism, modernism, and the New Age, the new things accelerated the growth of divisions and misunderstandings between people by changing fundamental assumptions about many subjects — including other people!
This has led to troubling developments among people of all faiths and philosophies, including atheism and secularism.  Yes, atheism is a faith, since it is logically impossible to prove the existence of non-existence. God’s non-existence is therefore a matter of faith; faith applies to that which is not manifestly true, i.e., that can be proved empirically or logically.  Secularism as a philosophy seeks to interpret life on principles taken solely from the material world, without recourse to religion (Concise Oxford Dictionary of the Christian Church).
The idea has spread that you must not even speak to people who do not share your particular faith or philosophy.  In extreme cases, you must not even speak to those of your own faith or philosophy who differ on minor points of application of religious doctrine or philosophical principles.  That is, others may agree completely on a doctrine or principle, but apply it in a manner with which you disagree, sometimes violently.
Nowhere is this more evident than when it comes to the natural law, defined here as the universal code of human behavior; the agreement that certain things constitute right and wrong for every human being.  No exceptions.  Thus, every single human being has the rights by nature to life, liberty, and private property.  How these rights are exercised or defined in a particular situation may differ widely, but the essence of life, liberty, and private property must always remain the same.
With the shift away from actual human beings to some abstraction, however, how the exercise of a right is defined becomes more important than the right itself.  And it gets worse than that.  As Msgr. Ronald Knox noted in his book, Enthusiasm (1950), to the enthusiast (as he termed them), the “ungodly” (or whatever label is applied to those outside your group with whom you disagree or of whom you disapprove) have no rights at all.
Thus, refusing to speak to others because of how those others think or behave is not a violation of the rights of the others or an offense against their dignity as persons.  They do not think or believe the way you think or believe they should think or believe.  Those others are therefore not fully human or not human at all, and thus have no rights or dignity that you need respect. 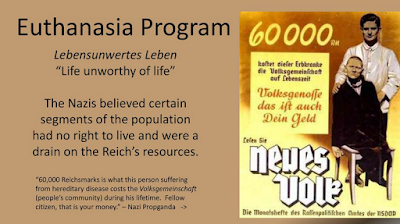 Is this virtuous?  Hardly.  Nor is it a harmless way of showing contempt for others.  The idea that those whom you consider unworthy of being treated like human beings can be ignored, dismissed, or eliminated was the guiding principle of Die Freigabe der Vernichtung lebensunwerten Lebens (1920), “Allowing the Destruction of Life Unworthy of Life,” by Karl Binding and Alfred Hoche, the book used as the basis for the Nazi T-4 Euthanasia Program.
Thus, to say that a mere shift in the basis of the natural law is unimportant or has no consequences is more than naïve.  It is delusional.  How this works out today is what we will look at in the next posting on this subject.
#30#
Posted by Michael D. Greaney at 6:00 AM