This past Friday, September 1, 2017, we read the “Labor Day Statement 2017” of the United States Conference of Catholic Bishops by Most Reverend Frank J. Dewane, Bishop of Venice, Chairman of the Committee on Domestic Justice and Human Development, United States Conference of Catholic Bishops, September 4, 2017.  It’s dated today, but it was released last week . . . possibly to give its author a running start to get out of town ahead of angry mobs of the unemployed.


Why?  Because all the Statement did was repeat platitudes about trying to implement emergency measures as solutions to a problem growing exponentially worse every year.  Capitalists are aware that these measures can’t work in the long term, and are risky in the short term, and so reject them.  Socialists ignore reality and insist that they would work if other people weren’t so greedy.  Everybody else just stands around wondering why nobody is talking sense or even saying something that ordinary people can understand.
Ironically, it was the Catholic Church that gave the solution more than a century ago in an effort to counter the evils of capitalism, and the evil of socialism (if you have to think about that . . . good).  As succinctly put by Pope Leo XIII,
We have seen that this great labor question cannot be solved save by assuming as a principle that private ownership must be held sacred and inviolable. The law, therefore, should favor ownership, and its policy should be to induce as many as possible of the people to become owners.  (Rerum Novarum, § 46.)
Now . . . does that say don’t do any of the emergency measures that everybody thinks are being presented as a solution?  No.  It does say, however, that if you want a solution, get to work figuring out a way to make as many people as possible owners of capital.
. . . if you want a solution, that is. 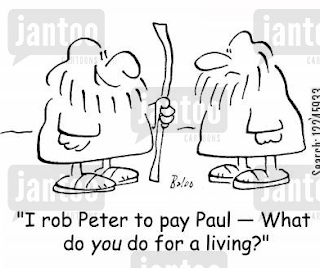