Those Wacky Distributists and Friends


Last Friday’s “News from the Network” excited a bit of a controversy among Catholic socialists — evidently not an oxymoron, despite Pope Pius XI’s statement in § 120 of Quadragesimo Anno that, “Religious socialism, Christian socialism, are contradictory terms; no one can be at the same time a good Catholic and a true socialist.”

Now, some people might think that this papal pronouncement is pretty clear and unequivocal.  We do.  Also, The Wanderer (while it certainly doesn’t seem to take it to heart, especially in their promotion of georgism and social credit) has a slightly different version of the second part of it on their masthead: “No one can be at the same time a sincere Catholic and a true socialist.”
You obviously don’t have to believe or abide by the statement to understand it.  It’s pretty straightforward.
. . . or so you’d think.  This past Friday, however, we quoted what we thought was a rather ambiguous statement made in an essay by Joseph Cardinal Ratzinger before his election as Pope Benedict XVI.  We noted that a number of people have 1) taken the quote as endorsing socialism as authentic Catholic doctrine, and 2) as having the authority of an infallible papal declaration:
In England [socialism] became the political party of the Catholics, who had never felt at home among either the Protestant conservatives or the liberals. In Wilhelmine Germany, too, Catholic groups felt closer to democratic socialism than to the rigidly Prussian and Protestant conservative forces. In many respects, democratic socialism was and is close to Catholic social doctrine and has in any case made a remarkable contribution to the formation of a social consciousness.
Read carefully and objectively, there is nothing in that statement explicitly equating Catholic social teaching and socialism.  It says some good things about socialism, true . . . but then so did Pius XI: “Socialism, like all errors, contains some truth (which, moreover, the Supreme Pontiffs have never denied).”  (Quadragesimo Anno, § 120.)
Is that an endorsement of socialism as consistent with Catholic social teaching?  If you think so, however, what Pius XI said right after that should settle the matter: “[Socialism] is based nevertheless on a theory of human society peculiar to itself and irreconcilable with true Christianity.”
In any event, an essay by Cardinal Ratzinger can in no way be construed in the same light as a magisterial statement by Pope Benedict XVI or any other pope.  Not in the real world, anyway.  It’s not even as strong as the link between what a politician promises to get elected, and what he actually does.
Or so we thought.  Evidently there is a rather large number of people out there who dismiss Pius XI’s infallible declaration in favor of Cardinal Ratzinger’s musings.  And they have tempers.  And they lose them.  Easily.
Out of the clear blue over the weekend we got a string of postings on FB (where we had “shared” the news notes) spewing invective.  Apparently the command to “love thy neighbor” does not apply to FaceBook.
We attempted to discuss the issue.  Our uninvited interloper would have none of it.  We put in a link not only to our own website, but to an article discussing the issue by Fr. Robert Sirico of the Acton Institute published in Crisis magazine.  That really set him off.  Some of the interloper’s — unedited — remarks were:
Learn your faith. You are being deceitful and conniving. “Private magisterium” [Which we never mentioned. — ed.] says a libertarian pretending to be a distributist- both pet economic theories. It’s deceptive to claim that quote is ambiguous. Crisis magazine? Hahahahahahaha!! Robert Sirico? He lies for his funders. To creating a web of lies around CST. Pet economic theories by conservative Catholic ideologues is the usual.  [Usual what, you ask?  We don’t know, either. — ed.]
At this point someone from the Chesterton-distributist network weighed in . . . not, as one might suppose, in protest over distributism being dismissed as a “pet economic theory” or to defend private property and Catholic social teaching against socialism of any kind, but to attack Fr. Sirico!  As this prominent “Chestertonian” sneered: “Fr. Robert Sirico. A man who devotes his life to giving Catholics cover to ignore Catholic social teaching.”
At that point the original interloper again weighed in: “And here is the fool [referring to us, not the Chestertonian] selling his libertarian beliefs as distributism.  Predictable.”  He also kept ranting about the gold standard for some reason known only to himself.  We’re libertarian?  And who brought in distributism?
Rather appalled that even a Chestertonian could miss the obvious point, we first asked the interloper what was the deal with his gold standard obsession (to which he would return a few more times), and why did he accuse Fr. Sirico of lying without any proof or even a specific accusation?  We then commented,
By the way, Chestertonian, you do know what this thread is about, don’t you? And you saw the interloper’s comment about distributism? Rather negative, I thought, perhaps even pejorative. Correct me if I’m wrong, but isn’t the official line of the distributists that distributism is definitely not socialism, and that distributism is based on Catholic social teaching? Has that changed? Did I miss the memo?
Here’s a game you can play if you ever get into a debate with a Chestertonian: ask a specific question, and see if you can keep him or her on course and get a straight answer.  Instead of saying that distributism is/is not socialism (G.K. Chesterton was rather adamant on this particular point, by the way — no, distributism is not socialism, any more than it is capitalism . . . according to G.K. Chesterton, that is), the Chestertonian dodged the question: 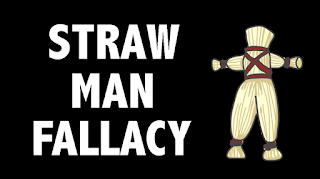 There is no “official line” on Distributism. Ask ten different Distributists about Distributism and you’ll get ten different answers. And maybe a fistfight or two. [And we have a sneaking hunch who would start those fights. . .  — ed.]
The mistake most self-proclaimed “Distributists” make is that they confuse it with libertarianism. They think that being a Distributist means being opposed to government regulations, being opposed to any government interference at all. [We think he must have been referring to us, which argues the Chestertonian’s almost cosmic ignorance of the Just Third Way. — ed.]
Distributism doesn’t mean anything like that at all. [Like WHAT? You haven’t said anything! You just set up a straw man.  What’s with the libertarian shtick? — ed.] Quite the opposite, there is no way an economy based on Distributist principles could exist without a host of government regulations, including tax policy, to protect small businesses from the ravages of big business. [So, is distributism socialism or not? — ed.]
Nor does authentic Distributism (or Catholic social teaching, for that matter) preclude government-based solutions like single-payer health care. In fact, government-run health care may be the only way to implement the Church teaching that health care is a human right. [Yeah, yeah, but is distributism socialism or not?  And it’s access to healthcare, not healthcare, that’s a right — ed.]
You, like Quadragesimo Anno, fail to make the distinction between totalitarian socialism and democratic socialism, like Pope Benedict (and the interloper) does. [That’s not correct; Quadragesimo Anno was directed specifically at religious/Christian — “democratic” — socialism, while Divini Redemptoris was directed at the totalitarian variety . . . but did the Chestertonian claim that distributism is socialism?  What did he say? — ed.]
No matter how many times we went over what the Chestertonian said, we didn’t see that he answered the question: is distributism socialism?  So we (foolishly) asked the Chestertonian flat out: Had he actually read Quadragesimo Anno, and was he saying, in effect, that a vague statement by a cardinal trumps a magisterial statement by a pope, and is distributism socialism?
I’ve read paragraph 120 in QA, which is exactly as much as 99.99% of all libertarians have read. And I’ve skimmed the rest. So enough of that. [Oh, he’s “skimmed the rest.”  He’s an expert. — ed.]
Reread my comment. I typed slow, just for you. I did not claim that Didtributism [sic] and socialism are the same. I said that most “Distributists” have no freaking clue what they’re talking about. [Which was not the question.  But we is shore glad he done writed slow.  Or slowly. — ed.]
The bottom line here is that a prominent Chestertonian could not answer a straight question: Is distributism socialism?  Instead, we got a string of insults, accusations, and non sequiturs.  And then he insulted his fellow distributists!
Of course, there might be distributists who would say the same thing about the prominent Chestertonian — recall the old army joke about the Drill Instructor pulling a recruit aside and carefully explaining to him that everybody was out of step except him. . . . ?
If this is the “face” that Chestertonians and distributists present to the public, 1) it’s not a good advertisement for Chesterton (“Become a Chestertonian!  Be as nasty, spiteful, and malicious as you like!”) and, 2) it argues a certain weakness in a movement in which the only time its spokesmen aren’t insulting or attacking outsiders is when they’re attacking and insulting each other.
Unless, of course, you join in order to get into fistfights and have no freaking idea what you’re talking about. . . .
#30#
Posted by Michael D. Greaney at 6:00 AM