Ordinarily in the summer we experience something of a lull in activity.  That has not been the case this year.  A number of projects and initiatives are moving forward very well:


• This past Tuesday Dr. Norman G. Kurland gave another talk on the Just Third Way over the internet to people in Asia, the Pacific Rim, and Africa.  More than five times as many people attended the session, a 180% increase over last week.  As can be seen from the graph to the right, participation has increased dramatically in just three sessions.  The geographical breakdown was 20% from Australia, 18% from Hong Kong, 16% from Singapore, 10% from India, 8% from Taiwan, 8% from New Zealand, 8% from Japan, 4% South Africa, 3% from Vietnam, 2% from South Korea, 2% from Thailand, and 1% from China. 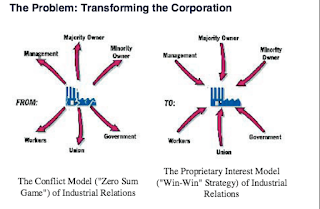 • Thursday night Norman Kurland and Dawn Brohawn gave a talk at Fort Belvoir in Northern Virginia on principles and applications of Justice-Based Management to the Management 5500 course on “Institutional Learning.”  Following the final presentations by the graduate students, Norm gave a talk outlining the principles on the macro scale, and Dawn spoke on applying the principles on the micro scale in an institution.  The talk went well, although there were a few glitches with the PowerPoint presentation.
• On Friday (today) there was a meeting with Kimberly and TK about “Justice Classrooms” as a way of kickstarting the Justice University concept and reducing the cost of education (see below for related news item).  The fact remains that education is both too expensive . . . and doesn’t really educate, being for most people just very expensive job training for jobs that in many cases don’t exist. 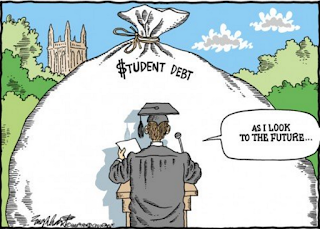 •According to a recent study, the average debt load on graduation is about $37,000 per student.  Add to that the fact that most students attend college on the false premise that a “good education” (i.e., good test-taking — telling the professor what he or she wants to hear — and suck-up skills) guarantee getting a “good job” . . . defining “good job” as a position in which you tell the boss what he or she wants to hear and suck up to anybody with power), and you have a certain recipe for lifelong debt slavery, total penury, or both.  Then consider that the national debt is in the trillions, and per capita non-mortgage revolving consumer debt is around $10,000.  The bottom line is that unless Capital Homesteading is implemented soon, and the monetary and tax systems reformed along the necessary lines, things are only going to get worse . . . and the United States economy is still considered one of the sounder ones in the world. . . . 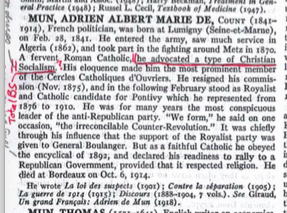 • Speaking of education (sort of), we discovered recently while investigating the career of Adrien Albert Marie Comte de Mun (1841-1914) that since 1911 the Encyclopedia Britannica has stated that de Mun advocated a form of “Christian socialism.”  On the contrary!  De Mun spent his entire career fighting against socialism and Neo-Catholicism (considered by many to be the same thing).  Although a monarchist, de Mun declared that he could accept the Third French Republic if it would respect basic human rights, especially freedom of religion, and the dignity and sovereignty of the human person.  Pope Leo XIII’s 1892 encyclical Au Milieu des Sollicitudes, “On Allegiance to the Republic,” incorporates much of what de Mun proposed, and the pope sent him a letter in 1893 thanking him for his support and commending him on his work against socialism.  De Mun a socialist?  Not likely — but that doesn’t stop people from taking the Encyclopedia Britannica article as authoritative and using it as the basis for their conclusions.
• Here’s the usual announcement about the Amazon Smile program, albeit moved to the bottom of the page so you don’t get tired of seeing it.  To participate in the Amazon Smile program for CESJ, go to https://smile.amazon.com/.  Next, sign in to your account.  (If you don’t have an account with Amazon, you can create one by clicking on the tiny little link below the “Sign in using our secure server” button.)  Once you have signed into your account, you need to select CESJ as your charity — and you have to be careful to do it exactly this way: in the space provided for “Or select your own charitable organization” type “Center for Economic and Social Justice Arlington.”  If you type anything else, you will either get no results or more than you want to sift through.  Once you’ve typed (or copied and pasted) “Center for Economic and Social Justice Arlington” into the space provided, hit “Select” — and you will be taken to the Amazon shopping site, all ready to go.
• We have had visitors from 24 different countries and 36 states and provinces in the United States and Canada to this blog over the past week. Most visitors are from the United States, the Philippines, Canada, Australia, and India.  The most popular postings this past week in descending order were “Distributist Economist Erratum Three,” “News from the Network, Vol. 10, No. 29,” “Distributist Economist Erratum Four & Conclusion,” “Correcting a Few Distributist Non-Facts,” and “Distributist Economist Errata One & Two.”
Those are the happenings for this week, at least those that we know about.  If you have an accomplishment that you think should be listed, send us a note about it at mgreaney [at] cesj [dot] org, and we’ll see that it gets into the next “issue.”  If you have a short (250-400 word) comment on a specific posting, please enter your comments in the blog — do not send them to us to post for you.  All comments are moderated, so we’ll see it before it goes up.
#30#
Posted by Michael D. Greaney at 12:14 PM