In our last episode, we saw the distributist economist whom we have been calling “Tom Steele” (“Joe Wide” was, perhaps, sufficiently “broad” in his outlook to remain silent and be thought a fool rather than to open his mouth and remove all doubt) give us a piece or two of his mind.  Judging from the amount he shares, he has a great deal of mind to spare.  We hope. . . .


It would have been a better advertisement for distributism, of course, had the distributist economist given us something more substantive, for example, showing where we misstated something, rather than to go off on a series of tangents claiming we hadn’t said anything in over 7,000 words (especially when it can be checked), but we have yet to receive a critique from Steele or his select group of fans and confreres that addresses the actual items or areas of disagreement rather than the personalities of those who disagree.
That is not to say we have not received some intelligent criticisms and insightful comments from some distributists (quite a few, actually, and more all the time), or that adherents of other schools of economics are always polite and respectful . . . or even civil.  For example, take a gander at Nobel Laureate Dr. Milton Friedman’s rather “odd” (we’re being polite) response to an invitation to debate the ideas of Louis Kelso.
Okay, okay — this was before Friedman was awarded his Nobel Prize, and (we blush) it was something of a set-up for Friedman.  A few years before this exchange, Dr. Norman Kurland had been given a seat next to Friedman at a luncheon following a presentation on military conscription in which Norm agreed with Friedman (for the record, both were opposed to it).
When Friedman showed up and sat down before his yummy rubber chicken, Norm asked Friedman what he thought of the ideas of Louis Kelso.  Friedman got up from the table and walked away without saying a word, and never came back.  When a (future) Nobel Laureate sets the bar that low, who are we to expect even the most admired and prominent distributist economists do any better?
In any event, here is the rest of the distributist economist’s response to Deacon John.  As we warned last Thursday, it starts to get a little . . . personal, possibly even a trifle off the topic.  Still, as Steele has repeatedly claimed that we silence him and refuse to let him speak (and then deletes his comments to that effect so that people wonder what the heck we’re talking about), it is clearly our duty to ensure that free enquiry is not muzzled, that trigger words and micro- or macro-aggressions do not stifle freedom of the press, and no thought of Tom Steele, however trivial or irrelevant, remains unexpressed.
Again, Steele’s words are presented exactly as he wrote them, with only some names changed to protect Chestertonians and distributists from terminal embarrassment:
As to the third point, he actually concedes what I am saying: that the purchase price must be lower the then actual cash flows, or the scheme won’t work. [Untrue.  We said no such thing.  We carefully specified that the purchase price must be lower or equal to the present value of the estimated, not actual, future cash flows or no one would make the purchase.  Demanding that actual cash flows be used requires certain knowledge of future events. — ed.] Now, the ideal market price of an income producing asset is always the NPV of all the future income streams. [Untrue.  One, there is no such thing as “the ideal market price.”  This was discussed at length.  Two, it’s not the net present value, but the present value.  Three, the future income stream is an estimate, as we explained in some detail, not the absolute certainty Steele assumes.  Four, “always”?  There is never any other reason for having a different price? — ed.]   But since these concern the future, the actual price always varies from the ideal price. [“Ideal price” is a Platonic concept that assumes ideas (such as value) have an existence independent of the human mind.  The world, however, is Aristotelian, going from the particular to the abstract, not from the abstract (the ideal) to the particular. — ed.]   And indeed, all financial speculation [We were not talking about speculation, but investment. — ed.] depends on this point, on locating assets which have significant differences between the actual and ideal market price, and going long if the price is too low and short if it is too high. [There is no such thing as an “ideal price” in the sense Steele uses the term. — ed.] 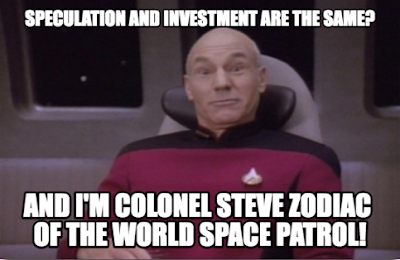