Yesterday we looked at what many people in power (both politically and financially) think of as “tax reform.”  We discovered that there is a big problem when you’re trying to reform the labyrinthine tax code — it doesn’t matter which country, pretty near every one of them is a complete mess.


That is, under the influence of Keynesian economics, the world’s tax systems are being manipulated to try and make them do what the world’s commercial banking systems and central banks were invented to do: fund private sector growth.  At the same time, we realized that banks are being manipulated to make them do what the world’s tax systems are supposed to be doing: fund government operations.
In other words, we discovered that — as with most things Keynesian — everything is bass-ackwards.  High wages bring prosperity?  No, prosperity brings high wages.  Inflation causes full employment?  No, full employment can cause inflation . . . if you’re screwing with the monetary system.
Which brings us to today’s topic: monetary reform.  From what we saw yesterday, it is clear that there is no way a rational tax reform is going to get anywhere without a rational monetary reform, just as no rational monetary reform is going to get anywhere without a rational tax reform.
. . . and neither will get anywhere unless the problem of maldistribution of ownership can be solved.
Fortunately, all three tie in together.
First, What is money?  Money is anything that can be accepted in settlement of a debt, “all things transferred in commerce.”  Money is the “medium” by means of which I exchange what I produce for what you produce.
So what happens when a non-productive entity starts issuing money, that is, promising to deliver what it doesn’t produce in exchange for what others do produce?  If it’s a private individual, it’s called “counterfeiting,” i.e., illegally making promises for other people to keep out of what they produce.
If it’s the State doing it, of course, it’s completely different.  In that case, it’s not counterfeiting, but “Modern Monetary Theory,” and the money is a “non-repayable debt the nation owes itself.”  The State makes promises that productive people are forced to keep.
Come to think of it, “counterfeiting” and “Modern Monetary Theory” aren’t all that much different when you stop to think about it, except that one is legal, and the other isn’t.  Except that the other isn’t legal, either, if we’re talking about the United States which removed the power to create money from the Constitution. . . .
Anyway, what we’re looking at today is not what’s wrong, but how to fix it.  And how can we do that?
We can do it by killing two birds with one stone.
The Big Question in any proposal for expanded capital ownership is where to get funding.  The answer, as Louis O. Kelso and Mortimer J. Adler pointed out in their two collaborations, The Capitalist Manifesto (1958) and The New Capitalists (1961), is in the science of finance.
The rule in corporate finance is never buy anything that doesn’t pay for itself within a reasonable period of time, these days around three to seven years, depending on the type of capital.  That doesn’t mean the debt will be paid off in three to seven years, or that the cash will be replaced, but that the capital will generate profits sufficient to breakeven on the purchase price in that amount of time.
For example, a widget-making machine (everybody in the finance textbooks makes widgets; there must be one heck of a market for them) generates profits of $20,000 each year and costs $100,000.  What is the “payback period”?  Payback = Cost divided by annual profits, so $100,000 / $20,000 = 5 years.
Does that mean the machine is paid for in five years?  No, it means “it pays for itself” in five years, a different concept.  Given a ten-year acquisition loan with zero interest (we’re too lazy to do a proper loan amortization schedule just for this example), the machine will be paid for in ten years at a rate of $10,000 per year, leaving the owners to divvy up $10,000 per year in profit for the first ten years of operation, and $20,000 per year after that.
Now, instead of taking out a loan, or using company cash reserves, suppose the company issued new shares to raise the money to purchase the machine?  And sold the shares to people who previously owned no shares, and who purchased them on credit, paying off the share acquisition loan using the $20,000 per year in profits generated by the machine?
Right there you’ve solved the problem of people who own no capital by making them capital owners. 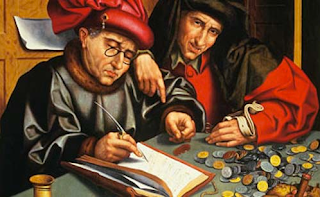 Now suppose that instead of lending money out of existing accumulations for expanded capital ownership, the commercial banks tied in with the central bank created new money so people without shares and without savings but with the opportunity to purchase new shares could do so.  If all earnings were paid out as dividends (after being made tax deductible at the corporate level) and the new shareholders were permitted a tax deferral on all dividends used to service the acquisition debt (treated as ordinary income if not used for that purpose), then new capital owners could be springing up all over the place, and — per this example — own the machine in five years.
It would also start shifting the backing of the money supply from government debt (which produces nothing except more debt) to private sector assets . . . which was the original intent of central banking.  Eventually, the tax base would be rebuilt to the point where the government could fund everything out of taxes, and avoid debt completely, except for short term borrowing out of existing savings to make up for temporary tax collection shortfalls.  And let's call it "Capital Homesteading."
Oh, yeah.  Adopting a monetary standard that actually is a standard would make some sense so that the value of the currency doesn’t keep changing all the time.  Silver lasted for a few thousand years, gold for about a century . . . why don’t we try the Kilowatt Hour or something objective like that?  It’s at least something to think about.
#30#
Posted by Michael D. Greaney at 6:00 AM