“The Kingdom of God on Earth”?


In The Quiet Man (1952)) — one of the greatest films of all time . . . except when Knute Rockne, All American (1940) is showing — one of the minor characters arguing with another (“Mister Maloney”) tries to clinch it by saying, “If you knew your country’s history as well as you claim to know it, you’d know that,” etc.


Well, of course they keep arguing, because “Mister Maloney” refuses to admit that he doesn’t know his country’s history as well as he claims to know it, and the other character isn’t going to give ground on what he knows is true.  Besides, if they stopped arguing, they’d have to go back to work. . . .
Recently an article appeared in La Civilta Cattolica, a journal established in 1850 to counter the growing problem of confusing Catholic social doctrine with various proposals for social betterment, particularly “New Christianity”/”Neo-Catholicism” and other forms of “the democratic religion,” i.e., socialism . . . which is the one thing worse than capitalism.  Ironically, the piece by Antonio Spadaro and Marcelo Figueroa, “Evangelical Fundamentalism and Catholic Integralism in the USA: A Surprising Ecumenism,” exhibits an almost complete misunderstanding, even ignorance, of their “country’s” (i.e., the Catholic Church’s) history, especially in the United States, as well as the import of its social teaching.
The authors’ argument centers on Pope Francis’s “radical rejection” of the establishment of “the Kingdom of God on Earth.”  While this is perfectly true, the authors extrapolate from this a papal condemnation of efforts by conservative Catholic and Evangelical groups in the United States to reintegrate moral values (and capitalism) into civil life to the presumed detriment of the liberal (socialist) agenda.
The message is clear: fear capitalism and conservative religious beliefs, theology, and politics.  This is because “they” (those reactionary Evangelical Fundamentalists and Catholic Integralists) are going to force their Southern White (i.e., “racist”) religious beliefs on everyone else and re-establish the conservative capitalist utopia of the Kingdom of God on Earth, just as in the oppressive days of Jim Crow and the Holy Roman Empire.  The conservative religious vision will control Christianity, and Christianity will control the State. 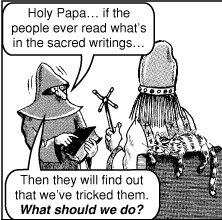