Ever since the full repeal of the Glass-Steagall act, there have been calls from some quarters that it should be reinstated.  Naturally, this has sparked a number of responses from individuals and groups that were the ones to gain from the act’s repeal insisting that All Is Well.  This is made all the easier by the fact that those demanding its reinstatement have no more idea of Glass-Steagall’s purpose than those who were instrumental in its repeal.
Don’t get us wrong.  Glass-Steagall and similar laws are essential to the functioning of a just free market system.  The problem is that neither opponents nor advocates know what it did.
Advocates, for example, focus on risk, size, and what they believe to be an inherently corrupt financial system that needs to be under more strict government control.  One of the better critiques — that of Richard Escow in the November 16, 2015 Wall Street Journal — gave the following list of reasons (copied verbatim) why the U.S. needs Glass-Steagall:
1. Too-big-to-fail banks are bigger, riskier, and more ungovernable than ever.
2. The argument that Glass-Steagall didn’t cause the 2008 financial crisis is wrong.
3. Repeal of the Act has not worked as promised.
4. The repeal of Glass-Steagall is further corrupting the culture of banking – if such a thing is possible.
5. Too-big-to-fail banks are a threat to our democracy.
As we said, we copied these word-for-word, and #2 is phrased badly: it should say “The argument that repeal of Glass-Steagall,” etc.  Otherwise, it sounds as if Glass-Steagall somehow caused the 2008 financial crisis.
Recently, William M. Isaac and Richard M. Kovacevich gave us “The Shattered Arguments for a New Glass-Steagall” in the April 26, 2017 Wall Street Journal.  Isaac’s and Kovacevich’s argument was a bit more concise than that of Escow.  It boiled down to one claim: that there is no need to separate investment banking from commercial banking because investment banking isn’t risky; the bigger the bank, the easier it is to diversify, and that lessens risk.
We hate to tell you (and whenever anybody says they hate to tell you, it means they’re loving every minute of it), but neither side knows what they are talking about.  Both sides in the discussion have been missing the point of specialization and separation of function in a financial, accounting, political, or any other kind of system.
An act like Glass-Steagall is not intended to eliminate risk, but to institute and maintain internal control in conformity with sound principles.  This allows the system to operate properly with built-in checks and balances.  Assessing the need for, or viability of, internal control measures solely on the basis of risk is a straw man, as is mere size.
Any first year accounting student is — or should be — aware that external control such as government regulations, however detailed or comprehensive, is only effective as a backup to good internal control.  If the system itself is not properly designed, no government fiat is going to make it work. 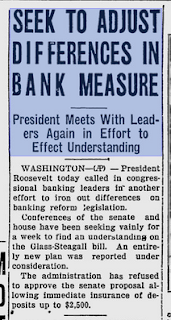 What the repeal of Glass-Steagall did was insert a great deal of uncertainty (not risk) as to the legitimacy of certain practices.  Under Glass-Steagall, collusion between investment banking and commercial banking was illegal per se.  It was a matter of objective fact if it happened, and could be prosecuted, whether or not any harm occurred.
It’s like getting pulled over for speeding on a completely empty highway.  You’re given a ticket not because you caused any harm or endangered anyone, but because you broke the law.
After the repeal of Glass-Steagall, collusion between investment banking and commercial banking became “business as usual.”  Yes, financial institutions became bigger, greatly increasing the magnitude of potential harm, but that is not the main point.
What the repeal of Glass-Steagall did was transform something from objective fact to subjective opinion.  With collusion itself no longer illegal, it became almost impossible to enforce controls of any kind on the financial system.
Returning to the example of getting pulled over for speeding, it’s as if all speed limits were abolished.  You could only be prosecuted if you endangered or harmed others . . . which can be a matter of opinion to be argued endlessly.
#30#
Posted by Michael D. Greaney at 6:00 AM