A couple of days ago on FaceBook we reposted a piece from a few years ago on why central bank reform is so important.  We tossed around a few specialized financial and banking terms (just to make us look important, of course), and didn’t think any more about it.  Then one of our favorite readers asked a question:
I could use some clarification on this point:
“Technically, of course, these were not actually bonds used to borrow existing savings, but bills of credit emitted as money.”
I don’t quite understand all the differences between bonds, bills of credit, etc. and how they can be or were misused.
Have we mentioned recently how much we like to get questions that are really questions and not disguised accusations or speeches?  (We still have bad memories of a twenty-minute question-and-answer period of which half an hour was taken by someone who leaped up to the microphone, elbowing everybody else out of the way and then proceeded to make a speech in the form of a pseudo question.  We were not the moderator, who sat there like a bump on a log doing nothing.  He may have been asleep.)
Okay.  Here’s the story:
Under the power to borrow existing money, a government can sell bonds to the public. This is not creating money, just shifting it around. A private entity can do the same, e.g., a company that floats a bond issue and sells it to people who have savings.
Bonds are supposed to be in exchange for existing money. They may be secured (technically mortgages) or unsecured (“unsecured” . . . we didn’t make up the terminology).
A bill of exchange is, strictly speaking, a financial instrument (contract) based on the general creditworthiness of the issuer. Issuing a bill creates money. The term is also used in foreign exchange and other areas of finance with different meanings, confusing matters.
Using outdated terminology that was abandoned because it made a lot of finance sound bad (which it is), a bill backed by an actual ability to pay out of a specific existing or future asset tied to the bill itself is called a “real bill.”  A bill that is not tied to a specific existing or future asset, general ability to pay, or is simply fraudulent is called a “fictitious bill.”
Bills are typically “discounted” instead of bearing interest, that is, they pass for less than the face value until presented for redemption, with the discount decreasing the closer to maturity it gets.  Sometimes a bill passes at a premium over the face for some reason or other, but the transaction is still called discounting.
The first transaction involving a newly issued bill is a discount.  All subsequent transactions involving a bill prior to its redemption are rediscounts.
Some bills may bear interest that kicks in if the bills are not redeemed or paid on the due date.  Other bills bear interest from the start and are also discounted, depending on the creditworthiness (or lack thereof) of the issuer. 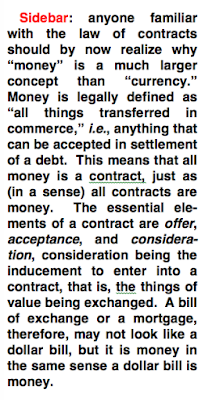 An issuer offers a bill, while someone who takes it accepts it.  Thus, a bill discounted or rediscounted by an individual or business is called a merchants or trade acceptance.  A bill discounted or rediscounted by a bank is called a bankers acceptance.
Thus, someone who uses a bill to purchase capital that pays for itself from a business, or gets a loan from a bank on the strength of the bill offered for the same purpose, is creating money by means of a real bill. If, however, someone uses a consumer credit card, he or she is creating money by issuing a fictitious bill.
A bill of credit is a special constitutional term for a financial instrument by means of which a government creates money.  A bill of credit is a fictitious bill because the issuer does not have a private property right at the time the promise is made in what he promises to deliver on maturity.
Bills of credit are usually issued in anticipation of future tax revenues that can be used to redeem them.  This is why bills of credit are also called “anticipation notes.”
In light of the Continental Currency debacle, the U.S. federal government under the Constitution was not given the same power to emit bills of credit as it had under the Articles of Confederation.  (Note that bills of exchange are “issued,” bills of credit are “emitted,” . . . and banknotes are "uttered" — again, we didn't make up this terminology).  The individual states are specifically prohibited from emitting bills of credit.
Now for the fun part.
The Currency Principle that underlies the major schools of economic thought these days does not recognize future savings, so that both mortgages and bills of exchange are considered as backed by past savings.  Understanding future savings, however, is essential to understanding the difference between a mortgage type contract based on past savings, and a bill of exchange type contract based on future savings.
By taking advantage of this confusion and applying a little sleight-of-hand, the past savings assumption gives governments the ability to emit bills of credit (future savings instruments) but call them bonds (past savings instruments).  This is in spite of the fact that a government, such as that of the United States under the Constitution, simply does not have the power to emit bills of credit . . . unless you call them bonds and claim they are something other than what they are!
This is because under Keynesian economics, based ultimately on the political theories of Thomas Hobbes, the State owns everything and can issue claims against it in the form of mortgage-bonds-that-are-really-bills-of-credit.  That way, all the government is presumably doing is dividing its alleged ownership of all existing wealth into smaller and smaller pieces . . . in theory.
In reality, the government is making promises to redeem debts out of what it can wrest out of future taxation from production that hasn’t happened yet.  That’s how a Keynesian can claim that the size of the national debt is irrelevant, while a binary economist goes into a panic.
#30#
Posted by Michael D. Greaney at 6:00 AM