Immediately after President Trump met with Pope Francis last week, we tried to find out what they talked about that was of direct interest to the Just Third Way.  All of it was of interest, of course, just not directly . . . even, we suppose, the seemingly endless discussions about people’s attire . . . although at the moment we don’t see how. . . . 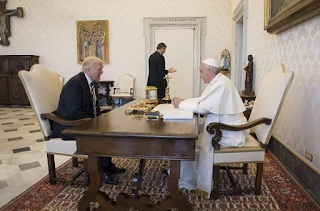 In any event, it wasn’t until after President Trump’s meeting with Pope Francis that something was mentioned.  This was during his meeting with Vatican Secretary of State Pietro Cardinal Parolin.  His Eminence urged President Trump not to abandon the Paris accord on climate change.  U.S. Secretary of State Rex Tillerson stated that Cardinal Parolin was told the administration was still studying the issues and had not made a decision.
Tillerson’s subsequent comments indicate that neither President Trump nor any of his advisors really understand what drives economic growth.  As he said,
“We had a good exchange on the difficulty of addressing climate change . . . and ensuring that you still have a thriving economy and you can still offer people jobs so they can feed their families and have a prosperous economy, and that’s a difficult balancing act.”
From a Just Third Way perspective, of course, the only way to ensure that anyone has a thriving economy is not to “offer people jobs.”  As we’ve demonstrated in recent postings and on quite a few other occasions over the years, “job creation” is an economic sinkhole.  At best it buys time until a real solution can be put in place.  At worst, it creates the illusion that a solution is being implemented, and convinces people that nothing more need be done.
As to linking economic growth to the climate change issue — that’s one of those “good news/bad news” things. 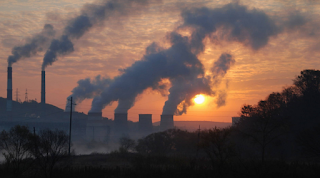 The bad news is that if you’re convinced that there can be no economic growth without adding to the problem of climate change, you’re going to do one of two things.  Either you’re going to deny that we need economic growth so we can save the planet, or deny that climate change is a problem so we can save the economy.
The good news is whether or not you’re convinced that there is climate change, there is an incentive to do something about weaning the world off fossil fuels.  And that means you’re going to do one of two things.  Either you’re going to deny that we need to use fossil fuels to provide the energy needs of a growing economy so we can save the planet, or you’re going to try and figure out some way to meet energy needs without the use of fossil fuels . . . which is almost saying the same thing.
The fact is there is a twofold problem here.  One, the world does need to develop alternate sources of clean and sustainable energy.  Fossil fuels are dirty and unsustainable.  It’s a simple economic problem: don’t use up something of which you have only a limited amount.  Save that for emergencies.  Instead, use what you can replace.
But fossil fuels are so cheap!  Up to a point, yes, but that is not the point . . . and it might not last.  Consider, for example, the passenger pigeon.  It was possibly the most plentiful game in the world.  Flocks were so large they took hours to fly overhead and darkened the sky.  Commercial hunters killed them by the millions; they were a cheap source of food for the poor.  Nobody thought there was anything to worry about, and by 1914 the passenger pigeon was extinct.
Now, whether the replacement for fossil fuels is fusion energy, wind power, tidal power, solar power, or hydrogen-based fuel cells, or something no one has thought of yet, the fact remains that fossil fuels, regardless how plentiful they might seem, are still limited and irreplaceable, while the other energy sources are renewable, and even, in some cases, unlimited to all intents and purposes.  Hydrogen, for example, is the most common element in the universe.  We will run out of things to fuel with hydrogen before we could run out of hydrogen.
Two, there is the idea that people can only participate in economic growth by having a job.  No, as we’ve stressed many times before on this blog, jobs don’t do much to help people participate fully in economic growth, and they are disappearing in competition with advancing technology, anyway.  Capital Homesteading should fill the bill.
So what’s the answer?  How about an aggressive program of expanded capital ownership, combined with a “Manhattan Project” to develop as fast as possible a minimum of three alternate energy sources that are clean, renewable, and cheap, and any one of which would be sufficient to supply all energy needs by itself.
It’s called “redundancy” — if one system fails, there’s a backup system ready and in place to take over.  A triply redundant system is, to all intents and purposes, fail safe . . . but even if all three systems go, there would still be the fossil fuels in reserve to keep things going until the other energy systems could get back on line.
That was what we would have liked the pope and the president to talk about if they had to talk about climate change instead of the wealth and income gap, terrorism, or anything else.
#30#
Posted by Michael D. Greaney at 6:00 AM