Cardinal Müller and the Just Third Way, Part I

This past Sunday, May 14, 2017, at the Cathedral of St. Thomas More in Arlington, Virginia, we had the privilege of singing for the Mass celebrated by Gerhard Cardinal Müller, Prefect of the Congregation for the Doctrine of the Faith.  His Eminence was in the United States as the main celebrant and homilist for the Baccalaureate Mass at Christendom College in Front Royal, Virginia, on May 12.  He was also the commencement speaker for this year’s ceremonies on May 13, where he received an honorary doctorate before delivering his address.
Interestingly, Cardinal Müller, seems to be the target of almost as much flak as Pope Francis . . . and for similar reasons.  That is people who insist on putting their own interpretation on Church teachings, papal statements, and media reports (or other vague rumors and gossip), without regard to the underlying principles of natural law or common sense, or (especially) if it is even true (we can certainly sympathize with that).
Oddly, both “conservative” and “liberal” Catholics do this, the former to their rather stagy dismay, the latter to their even stagier elation.  Evidently based on a shift from knowledge to opinion as the basis of truth (one of the ten great philosophical mistakes Mortimer Adler excoriated, a.k.a. the shift from the Intellect to the Will as the basis of natural law), all the histrionics and hissy fits seem quite convenient and geared toward advancing some agenda other than mere truth, which should be the only thing that matters.
Nor is this something peculiar to the Catholic Church, or even organized religion.  As the great constitutional scholar William Winslow Crosskey noted in his monumental study, Politics and the Constitution in the History of the United States (1953), legal positivism got its foothold in the U.S. as a result of the desire to preserve and extend slavery.  This culminated in the infamous Dred Scott decision in 1857 by means of which the United States Supreme Court shifted sovereignty from people to the State, the effects of which (reaffirmed in the Slaughterhouse opinion in 1873) can be seen in such decisions as Roe v. Wade and Citizens United.
Thus, whether we’re talking about politics, religion, economics, or the Great Pumpkin, nobody seems to care whether something is true, just whether it gets them what they want, whatever the cost, repercussions, or consequences.  All the “new things” to which Pope Leo XIII referred well over a century ago, e.g., legal positivism, moral relativism, nihilism, socialism, modernism, the occult, etc., etc., etc., all seem to boil down to one fundamental principle: all things must be subordinate to the desire of the strongest.  Might makes right.
And that was the problem Cardinal Müller addressed in his sermon — indirectly.
After a few comments on motherhood (this past Sunday was, after all, Mothers Day), His Eminence began by pointing out that Jesus (as Christians believe) is “the Way, the Truth, and the Life,” implying a bit more emphasis on Truth than “the Way” or “the Life” in the context of his talk.  Faith and Hope, he noted, are based on Jesus, Who is therefore the basis of the Family, the basic unit of society, of which the mother is the heart (an excellent segue, by the way, and it didn’t seem forced at all).  The Cardinal concluded by explaining that the Family is a mirror of heaven [or should be, in his opinion — ed.], and that restoring marriage and family is a priority, which can only be done by knowing Jesus, for by knowing Jesus, we know the Father. 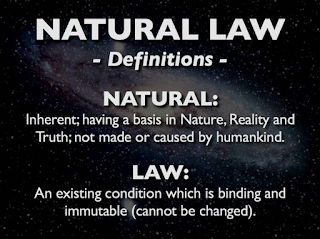 Let us expand on that from a natural law perspective and build on what Cardinal Müller said — meaning our understanding of his words, not what he actually said; we’re not quoting, but commenting.
As “true God and true man,” Jesus perfectly embodies the natural law, the common code of human behavior.  By following the precept of the natural law — good (justice) is to be done, evil (injustice) avoided — people conform themselves to Jesus as the perfect model, whether or not they believe He is God, or even ever heard of Him.
For non-Christians or non-Catholics, of course, this starts to sound like a giant, “So what?”, but that’s not the point relevant to the Just Third Way.  Translating the Cardinal’s remarks from “religious” to “natural law” language, all forms of society and our institutions must be based on truth, that is, the natural law, and the institutions of society be structured in such a way as to make the pursuit of justice, that is, of the good, the optimal choice.  The Family, especially, must be solidly grounded on truth, and the only way to restore marriage and family is to restore a foundation on truth in order to assist every member of the family to pursue justice and the good.
But how does this relate to the Just Third Way?
That is what we will look at tomorrow.
#30#
Posted by Michael D. Greaney at 6:00 AM