Popes are the Craziest People

Recently we began doing a little research into the life of Giacomo Pecci, who in 1878 was elected to the papacy and took the name Leo XIII.  After all, if you want to know where someone is coming from, it’s generally a good idea to find out where he’s coming from.
One of the things we found out was that commentators and “authoritative sources” opining on the real meaning of Catholic social teaching often have no real idea what they’re talking about, especially when they try to interpret, say, Rerum Novarum, as mandating a vastly increased role for the State.
No, one of the first things you learn about Father-Monsignor-Bishop-Archbishop Pecci/Pope Leo XIII is that he really, really, really viewed the civil power — the social tool of the State — with a very cautious, if not suspicious eye.  Yes, the State is an essential social tool . . . but that’s all it is.  It is not, repeat, not Thomas Hobbes’s “Mortall God,” and it most certainly is not “the sole intercessor available to the poor” as one enthusiast put it. (Dr. Rupert J. Ederer, “Solidaristic Economics,” Fidelity magazine, July 1994, 9-15.)
Frankly, § 318 of Economic Justice for All, the 1986 U.S. bishops’ pastoral on the economy, would have utterly baffled Leo XIII : “A modern economy without governmental interventions of the sort we have alluded to is inconceivable.”  After all, Leo XIII struggled for more than seventy years in a fight to resist State intrusion into religion and the family. His take on the matter?
There is no need to bring in the State. Man precedes the State, and possesses, prior to the formation of any State, the right of providing for the substance of his body.  (Rerum Novarum, § 7.) 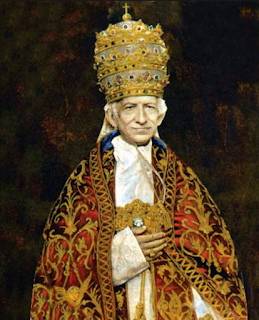