Recently we received an email from one of our numerous fans and followers asking us to comment on a couple of articles covering “social credit” he had seen on a distributist website.  He had seen us mention social credit a number of times, but we did not really go into what it is, or explain in any depth why we classify it among the seemingly countless varieties of socialism with which the modern world is afflicted.
Not wanting to put words into anyone’s mouth, we decided we couldn’t comment on the articles or even social credit itself without giving a definition of the term.  Unfortunately, the author of the articles just assumed that everybody knows what social credit is, and didn’t define it.  Nor were the various social credit websites or even the Wikipedia entry on social credit very helpful.  There is a massive amount of material on what social credit will (presumably) do, and how it is “Christianity in action” and all sorts of other very fine sounding phrases . . . but no quick, easy-to-grasp definition that you could give in an elevator if someone asked, “Hey, what is ‘social credit’, anyway?” 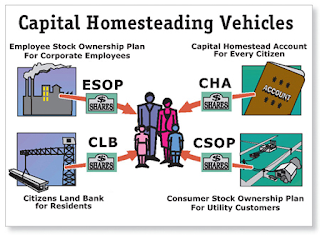 You know, like the quick answer to, “Hey, what is this ‘Just Third Way’ shtick, anyway?”  One quickie answer: “A system built on the dignity of the human person securing economic empowerment to every child, woman, and man through broad-based capital ownership financed by the future profits of the capital itself and collateralized with insurance instead of existing savings.  It is applied in the ‘Capital Homestead Act’ that is a comprehensive package of monetary, tax, and legislative reforms to encourage as many people as possible to become owners and provide them with the means of doing so.”
You don’t get to say much more than that, because by then the other person has reached his or her floor and is running down the hall as fast as a pair of chubby little legs will carry someone, is edging away with a fixed smile, or is asking for the URL for the website.  No, the material on social credit, even the summaries we found, all seemed to take for granted that you already know what it is, and are therefore fine with page after page of nice-sounding phrases and gilded promises telling you how great everything is.  Right before they start talking about an “A plus B theorem” and your eyeballs start rotating backwards into your head.
Having no luck looking for social credit directly, we found something by googling “Major Douglas,” who invented social credit.  We found something barely adequate, but still hardly pithy and to the point — and, frankly, rather incomprehensible.  It is, however, short(er) than most of what comes out of the social credit community.  Rather than run the risk of paraphrasing, we took this straight out of the Wikipedia entry on Major Douglas, so direct your comments to them, not to us if you disagree with it:
“There were two main elements to Douglas's reform program: a National Dividend to distribute money (debt-free credit) equally to all citizens, over and above their earnings, to help bridge the gap between purchasing power and prices; also a price adjustment mechanism, called the Just Price, which would forestall any possibility of inflation. The Just Price would effectively reduce retail prices by a percentage that reflected the physical efficiency of the production system. Douglas observed that the cost of production is consumption; meaning the exact physical cost of production is the total resources consumed in the production process. As the physical efficiency of production increases the Just Price mechanism will reduce the price of products for the consumer. The consumers will be able to purchase as much of what the producers produce that they want and automatically control what continues to be produced by their consumption of it. Individual freedom, primary economic freedom, was the central goal of Douglas's reform.”
Trying to be as objective as possible, there appear to be some fundamental contradictions in this description.  We realize we’re going out on a limb here, because the Wikipedia is not an authoritative source for anything, and the author(s) of the entry may have gotten one or two things wrong.
There may even be different schools of social credit; we recall some time back getting into a controversy between one adherent of social credit who was very angry that we took So-and-So’s understanding of something-or-other in social credit instead of his.  After all, there may be as many as three schools of “guild socialism,” from which social credit spun off after guild socialism itself split away from Fabian socialism, which was itself an expansion of the theories of Henry George which came out of Karl Marx's Communist Manifesto.  So, no matter what we say, somebody is going to think it’s wrong because it’s not his (or even her) version of social credit.
But we can start upsetting people tomorrow.  Unless (of course) you’re already offended.
#30#
Posted by Michael D. Greaney at 6:00 AM