As the election comes ever-nearer in the United States and people agonize over whether to vote for the great or the greater evil (the Elder Party candidate Cthulhu, by the way, is ’way ahead in the polls), we continue plugging away to persuade one or more of the saner variety of politicians to adopt Capital Homesteading as a major plank in his or her platform: 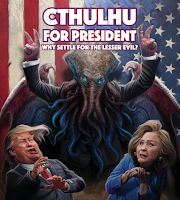 • Yesterday the CESJ core group had a meeting with John Sullivan, the past editor of the Irish Rover, an independent student publication at the University of Notre Dame.  Although the meeting was geared toward getting acquainted and giving a general presentation of the Just Third Way, John took a number of CESJ publications (notably, of course, Easter Witness: From Broken Dream to a New Vision for Ireland) and handouts, such as the ones distributed last year at the World Meeting of Families.  John said that he had become interested in CESJ by coming across a mention of the Just Third Way in a Notre Dame alumni internet group.  For years he had been interested in “distributism,” the expanded ownership proposal developed by G.K. Chesterton and Hilaire Belloc, but had decided that it was a little “pie in the sky” as there did not seem to be any practical means to implement it.  He had also been interested in the ESOP and in applications of Catholic social teaching.  In the Just Third Way he thought he saw a practical program of implementing the vision of Chesterton and Belloc — to say nothing of that of Popes Leo XIII and Pius XI.
• The Perth Herald-Tribune has been running columns on CESJ and the Just Third Way written by CESJ’s Director of Research, with a new one appearing every week.  Be sure to visit their website and send the link around your networks.
• Today is the 445th anniversary of the Battle of Lepanto, which the Catholic Church celebrates as the “Feast of the Most Holy Rosary.”  That doesn’t have anything to do with the Just Third Way (at least directly), but it did spark a brief thought about how, if the Ottoman Empire had been oriented toward wealth production financed with future savings instead of wealth collection financed with past savings (a peculiar way of describing the program of world conquest financed with war loot and slave trading), there might never have been a Battle of Lepanto (and Miguel de Cervantes might never have written Don Quixote), and the current problems in the Middle East would have an obvious solution: the Just Third Way.  By the way, although Chesterton’s epic poem Lepanto may be a literary masterpiece, it’s bad history.  Jack Beeching’s The Galleys at Lepanto (1983), which we bought when it first came out, gives a balanced history of what led up to the battle and its aftermath.  Used copies are extremely affordable. 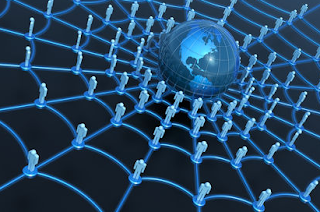 • The Small-Is-Beautiful lobby might not want to cheer just yet, but according to today’s Wall Street Journal, globalization is “on the skids.”  This creates a problem for businesses that rely on infusions of foreign capital to finance domestic operations, as well as those businesses exporting jobs overseas.  Both problems, of course, would be solved by “thinking globally, financing locally” through the proper use of the domestic commercial and central banking system.  This would equalize the power between different countries and regions by making them independent of foreign financing or labor, and thus able to employ true comparative advantage instead of manipulating currencies or shifting jobs and capital.
• CESJ’s latest book, Easter Witness: From Broken Dream to a New Vision for Ireland, is available from Amazon and Barnes and Noble, as well as by special order from many “regular” bookstores.  The book can also be ordered in bulk, which we define as ten copies or more of the same title, at a 20% discount.  A full case is twenty-six copies, and non-institutional/non-vendor purchasers get a 20% discount off the $20 cover price on wholesale lots ($416/case).  Shipping is extra.  Send enquiries to publications@cesj.org.  An additional discount may be available for institutions such as schools, clubs, and other organizations as well as retailers.
• Here’s the usual announcement about the Amazon Smile program, albeit moved to the bottom of the page so you don’t get tired of seeing it.  To participate in the Amazon Smile program for CESJ, go to https://smile.amazon.com/.  Next, sign in to your account.  (If you don’t have an account with Amazon, you can create one by clicking on the tiny little link below the “Sign in using our secure server” button.)  Once you have signed into your account, you need to select CESJ as your charity — and you have to be careful to do it exactly this way: in the space provided for “Or select your own charitable organization” type “Center for Economic and Social Justice Arlington.”  If you type anything else, you will either get no results or more than you want to sift through.  Once you’ve typed (or copied and pasted) “Center for Economic and Social Justice Arlington” into the space provided, hit “Select” — and you will be taken to the Amazon shopping site, all ready to go.
• As of this morning, we have had visitors from 47 different countries and 44 states and provinces in the United States and Canada to this blog over the past two months. Most visitors are from the United States, the United Kingdom, Canada, New Zealand, and Australia. The most popular postings this past week in descending order were “Thomas Hobbes on Private Property,”  “Aristotle on Private Property,” “Distributism, Socialism, and Syndicalism,” “Where’s the Recovery?” and “News from the Network, Vol. 9, No. 35/Religion and the Rise of Capitalism . . . and Socialism” (tie).
Those are the happenings for this week, at least those that we know about.  If you have an accomplishment that you think should be listed, send us a note about it at mgreaney [at] cesj [dot] org, and we’ll see that it gets into the next “issue.”  If you have a short (250-400 word) comment on a specific posting, please enter your comments in the blog — do not send them to us to post for you.  All comments are moderated, so we’ll see it before it goes up.
#30#
Posted by Michael D. Greaney at 2:07 PM