A Brief Discourse on Social Credit, VII: The Analysis, Part One

In yesterday’s posting we noted that even if social credit could deliver on every promise it makes, and every individual received a basic subsistence income from the State in the form of the National Dividend, it would be “unwise” to give the State that much power over the lives of its citizens.  Power corrupts, as Lord Acton quoted, and absolute power corrupts absolutely.
It’s almost a side issue — we said almost — that social credit has some serious theoretical problems that preclude it from ever functioning as advertised.  The fact is, social credit simply can’t work, and here’s why: 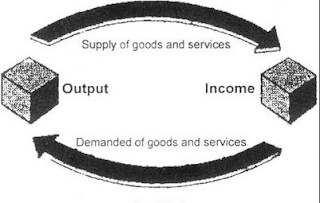 Major Douglas did recognize the first principle of economics.  He acknowledged that the purpose of production is consumption.  He also realized that there is a significant problem in how production is distributed under the capitalist system.
Douglas then made a critical error.  He alleged that the reason that there is a disconnect between production and consumption is that there is insufficient money in the system to clear all goods and services produced at market prices.
Douglas did not realize that existing and future marketable goods and services are money or can have money issued against them by drawing mortgages or bills of exchange.  Not understanding the true nature of money, Douglas concluded that there is far more being produced than people have the money to purchase.
This is impossible under Say’s Law of Markets.  Production is money; to say that there is more production than money to clear it does not make sense.
Not surprisingly, John Maynard Keynes (who rejected Say’s Law) made the same observation as Douglas in his General Theory (John Maynard Keynes, The General Theory of Employment, Interest, and Money.  New York: Harcourt, Brace & World, Inc., 1965,  I.3.ii. III.8.iii.).  At the same time, Keynes spoke very disparagingly of Douglas (and any other economist who didn’t happen to be Keynes): “The detail of his [i.e., Douglas’] diagnosis, in particular the so-called A + B theorem, includes much mere mystification.” (Ibid., VI.23.vii.)
In common with Keynes and other “Currency School” economists, Douglas did not realize the true significance of Say’s Law — that we do not purchase what others produce with “money.”  Rather, we purchase what others produce with what we produce.  “Money” is simply the medium through which we exchange our production for the production of others.
Thus the real problem is not scarcity of “money.”  As long as people can produce, there can always be enough money — assuming that producers are permitted to offer their own money for acceptance by issuing mortgages and drawing bills of exchange, that is, are permitted democratic access to the social good of credit.  As Henry Dunning Macleod noted, “Money and Credit are essentially of the same nature; Money being only the highest and most general form of Credit.” (Henry Dunning Macleod, The Theory of Credit. Longmans, Green and Co., 1894, 82.)
The underlying problem is that people lack ownership of the means to produce.  As technology advances, capital replaces labor as the predominant factor of production — and most people lack significant ownership of capital.  They are thus unable to produce marketable goods and services that they can exchange for the goods and services that others produce.
To solve the presumed problem of scarcity of money, Douglas started with the wrong definition of money, as did Keynes.  He defined money as “purchasing power” instead of “the medium of exchange.”
Money, however, is not purchasing power.  Rather, money has purchasing power.  Money is anything that can be used in settlement of a debt.
Douglas then compounded his error by proposing that a national monetary authority be established to determine the amount of new money that should be created each year to distribute to the citizens of a country as a “National Dividend.”  (C. H. Douglas, Credit-Power and Democracy.  Melbourne, Australia: The Social Credit Press, 1933, 4, 108.)
Creating money in this fashion would, according to social credit authorities, abolish taxes and provide every citizen with an adequate and secure income.  Goods and services would be subsidized to bring the price down to the presumed real price via a mechanism called the “Compensated Price.” (Ibid.)
While abolishing all taxes sounds good, however, it is more than a little dangerous.  When the politicians doing the spending have to go to the taxpayer to get money, they are going to pay attention to the taxpayer.  When politicians figure out ways to finance their projects without going to the taxpayer, suddenly they can spend much more on what they want without accountability . . . as long as they are careful to convince the electorate that the National Dividend or other entitlement will decrease or even disappear if you don’t reelect them.