One of the problems we’ve encountered with discussing the various types of socialism is that the natural tendency of such groups to splinter, reform, separate, and regroup makes tracing their genealogy a little confusing.  When you toss in the habit of “re-editing the dictionary” so that people become even more confused by the constant changes in meaning of fundamental terms, and the reliance on assertion and ad hominem logical fallacies, it’s no wonder why so many people end up being attracted to socialism.  Not knowing what it is, they figure it has to be better than anything they can actually understand. 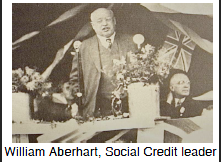 Going to authoritative sources, however, can clear up some of the mess, as well as returning to original definitions of terms.  Now, we still haven’t discovered a clear and concise definition of social credit, but we did find the following statement in an article by J.W.D. Lee, “Douglas: The Man and the Vision,” An Address Given at an Australian League of Rights Seminar at Dalby, Queensland in July 1972, The Social Crediter, September 1973, Vol. 53, No. 6, p. 4.  Since The Social Crediter claims (or claimed) to be the official journal of the Social Credit Secretariat, founded (according to the information in the journal) by Major Clifford Hugh Douglas in 1933, we assume it is authoritative, and what is published in its pages represents the official position of the social credit movement.  We corrected some of the punctuation, but changed nothing else:

Dr. Colin Clark wrote in his recent criticism: “Douglas’s ideas really began to exert influence when they were taken up in the mid-twenties by two active politicians, Mosley and Strachey, who disseminated them in a naive book entitled Revolution by Reason.” With respect to Dr. Clark, this is so much tripe. On the contrary, both the Fabians and the Guild Socialists repudiated Douglas’s proposals, not for the technical reasons which one might suppose, but for the philosophical end towards which they were directed. Sydney Webb, an early doyen of the Fabian Society, did indeed concede that there was no technical flaw in Douglas’s proposals, but that he did not like Douglas’s purpose. In 1934, Sydney Webb wrote the preface to. The Financiers and the Nation, by the Rt. Hon. Thomas Johnston, P.C., a former Lord Privy Seal. Webb eulogised Johnston’s book as a “great public service”. It was but another diatribe on the merits of nationalisation. Johnston, however, paid tribute to Douglas (p. 146). “What is impressing hundreds of thousands of people in the world is the Douglas proposal for a national dividend whereby the increased productivity of man and machine can be readily distributed — to consumers, and not, as today, permitted (first) to glut markets, and (second, and because of the glutted market) to limit production and throw the producers unemployed and among the non- (or limited) consumers. . . . If the claims of Major Douglas — to have worked out a technique whereby such a distribution of national dividend can be made without an inflation of the price level — are justified, then he has undoubtedly performed a service to the whole community which entitles him to rank with Watt and Lister.
Read carefully, this passage is the clearest thing we have found acknowledging social credit as a form of socialism.  According to the author, J.W.D. Lee, neither the Fabian socialists nor their offshoot the guild socialists had a problem with social credit as a system.  It met the technical criteria as a form of socialism.
What bothered the Fabians and the guildists was not Douglas’s proposal per se.  Rather, it was “the philosophical end towards which they were directed . . . . he did not like Douglas’s purpose.” viz., to distribute purchasing power without the necessity of the recipient having engaged in productive toil.
This, of course, is directly contrary to the Fabian goal of mandatory “full employment” — what Hilaire Belloc called “the Servile State” and which Belloc and Chesterton developed distributism to counter.  Another complaint, noted later in the article, was that social credit (assuming it works) would do nothing to abolish private title of land and industry.  Since “ownership” and “control” (enjoyment of the fruits, i.e., income) is what ownership is all about, however, it is clear that social credit would, in fact, abolish private property by rendering actual legal title utterly meaningless.
According to the Fabians and guildists, then, social credit is, strictly speaking, a form of socialism, but it doesn’t go far enough for them, and is therefore repudiated.  Because this was reported in an official social credit journal, we must assume that the social credit movement agrees that social credit is, in fact, socialism, although having some issues with other forms of socialism.
So, we still don’t have a quick “elevator speech” telling us what social credit is precisely, but we do have an acknowledgement from some other socialists that it is, in general, a form of socialism with which they have philosophical, although not technical, differences.
#30#
Posted by Michael D. Greaney at 6:00 AM