We recently (this week) heard from our correspondent in Germany, located near Ulm, in the state of Hesse, right over the border from Bavaria.  Like you care.  Anyway, one of her questions — all of them rather insightful for someone without an education in economics (or maybe because of that) was to ask why, when obviously many people aren’t being productive, and things are generally on the skids in Germany and elsewhere, why is the stock market booming?  And why are the more conservative financial analysts looking so scared?
We could only say that the Euro is — in common with most other currencies — backed completely by government debt, not private sector hard assets . . . and that means the currency is worth something only as long as people think it’s worth something, not because it’s worth something.  Much of this, of course, we can blame on the virtually worldwide adherence to the economic theories of John Maynard Keynes. . . .
And now for the news:
• Somewhat to our surprise (but not much), in reading Edward Pease’s The History of the Fabian Society (1916) we discovered that the economics of John Maynard Keynes and the proposals of the Fabian Society are virtually identical, particularly the emphasis on “full employment” and the necessity of a job as the only source of income for the great mass of people.  Interestingly, the Fabian socialist E.F. Schumacher, author of “the New Age Guide to Economics,” Small Is Beautiful (1973), was a protégé of Keynes, bringing the thing full circle.
• Other interesting tidbits from Pease’s book are that Hilaire Belloc wrote his most important book, The Servile State (1912) as a harsh criticism of the Fabian program (especially the mandatory full employment proposal), while Belloc and Chesterton developed their theory of “distributism” (which the Fabians called “distributivism” for some reason), as a moral alternative to Fabian socialism and its offshoots, such as Arthur Penty’s (or Richard Orage’s or George Cole’s, whomever you prefer) guild socialism and Major Douglas’s social credit.  Oddly, today’s Chestertonians and distributists promote the work of Schumacher, Penty, and Douglas almost as much as that of Chesterton and Belloc for some reason.  Another odd thing is that, while non-socialists have no trouble seeing the similarities, and Fabian socialism begat guild socialism, and guild socialism begat social credit, adherents of the systems insist to this day that they are completely different . . . except when they are the same!  As Pease insisted, they were all still true socialists, but they just couldn’t get along because those others (not the Fabians, of course, they made a mantra of being open minded — and, by golly, their brains did fall out!) insisted on everyone doing it their way; “it’s not our way” was sufficient to cut off communication.  Ultimately what mattered for all of them was not whether anyone was a socialist, of course, but whether they put socialism in place, whatever anyone called it.
• The CESJ Quarterly Board Meeting is scheduled for Monday of next week.
• Guy Stevenson recently gave CESJ a book on the New Deal from a liberal Catholic perspective.  Interestingly, all mentions of Archbishop Fulton J. Sheen are rather negative, giving the impression that he was against organized labor.  Msgr. John A. Ryan, for whom the Msgr. John A. Ryan Institute for Catholic Social Thought is named, is portrayed as a modernist, or (in non-Catholic language) a dissenter from Catholic social thought.  The book is useful in demonstrating how little someone has to know in order to get a Ph.D., teach at a university, and write a book.
• Fr. Edward Krause, a member of the CESJ Board of Counselors, reported that he had made contact with the “Censor Librorum” who had reviewed Easter Witness for an imprimatur.  The Censor claimed he had concluded that an imprimatur was not required, but said he would review it again, especially since he had forgotten to inform CESJ of his decision.  We await the results of the second review. 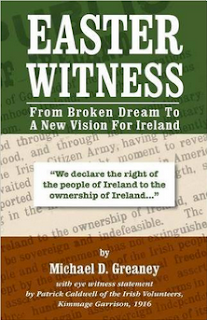 • CESJ’s latest book, Easter Witness: From Broken Dream to a New Vision for Ireland, is available from Amazon and Barnes and Noble, as well as by special order from many “regular” bookstores.  The book can also be ordered in bulk, which we define as ten copies or more of the same title, at a 20% discount.  A full case is twenty-six copies, and non-institutional/non-vendor purchasers get a 20% discount off the $20 cover price on wholesale lots ($416/case).  Shipping is extra.  Send enquiries to publications@cesj.org.  An additional discount may be available for institutions such as schools, clubs, and other organizations as well as retailers.
• Here’s the usual announcement about the Amazon Smile program, albeit moved to the bottom of the page so you don’t get tired of seeing it.  To participate in the Amazon Smile program for CESJ, go to https://smile.amazon.com/.  Next, sign in to your account.  (If you don’t have an account with Amazon, you can create one by clicking on the tiny little link below the “Sign in using our secure server” button.)  Once you have signed into your account, you need to select CESJ as your charity — and you have to be careful to do it exactly this way: in the space provided for “Or select your own charitable organization” type “Center for Economic and Social Justice Arlington.”  If you type anything else, you will either get no results or more than you want to sift through.  Once you’ve typed (or copied and pasted) “Center for Economic and Social Justice Arlington” into the space provided, hit “Select” — and you will be taken to the Amazon shopping site, all ready to go.
• As of this morning, we have had visitors from 54 different countries and 47 states and provinces in the United States and Canada to this blog over the past two months. Most visitors are from the United States, the United Kingdom, Brazil, Germany, and the Philippines. The most popular postings this past week in descending order were “Book Review: A Field Guide for the Hero’s Journey,” “Thomas Hobbes on Private Property,” “The Purpose of Production,” “Wilson and the Fed, XV: The Fight for Reform,” and “Why Did Nixon Take the Dollar Off the Gold Standard?”
Those are the happenings for this week, at least those that we know about.  If you have an accomplishment that you think should be listed, send us a note about it at mgreaney [at] cesj [dot] org, and we’ll see that it gets into the next “issue.”  If you have a short (250-400 word) comment on a specific posting, please enter your comments in the blog — do not send them to us to post for you.  All comments are moderated, so we’ll see it before it goes up.
#30#
Posted by Michael D. Greaney at 1:08 PM