The only thing that could happen in Germany and Austria-Hungary following World War I and the imposition of virtually unlimited reparations is precisely what did happen: the collapse of the financial system, the ruin of the economy, and complete political chaos.  It was a situation ripe for the rise of anyone who could promise stability and have some chance of achieving it.  As Germania, a large Berlin newspaper, reported on July 27, 1923, “It is a situation for a dictator.  The conditions call for a Mussolini in bullet-proof armor with a revolver in either hand.”
The collapse did not happen all at once.  During the war, the German population had patriotically turned in the predominantly gold currency and even personal gold jewelry in exchange for paper notes of the Loan Bank and the Reichsbank.  To keep financing the war, the government continued to issue additional paper currency, keeping the lid on inflation by implementing rationing and price controls.  The war debt at the time of the Armistice amounted to 147 billion Reichsmarks, payable in gold Reichsmarks, of which 89 billion Reichsmarks was in the form of “war loans” bearing heavy interest payments which fell due every year.  The remaining 58 billion Reichsmarks was “floating debt,” with large blocks of it coming due every few weeks.
After the war, but before the blockade was lifted, controls were brought to an end along with the government that had imposed them.  As a result, there were constant shortages of the necessities of life and a super-abundance of paper money backed only by the former government’s promise to pay.  Prices doubled before the blockade was lifted, and then doubled again before the end of 1919, increasing in less than a year more than they had during the entire war.  Furthermore, with her productive capacity in ruins, Germany was forced to import goods as fast as possible as soon as the blockade was lifted, just to keep people alive.  As Hjalmar Schacht analyzed the situation,
There was no tax base sufficient to retire the indebtedness, and there were no savings to refinance it.  Certainly no foreign investor would take a chance on German government bonds.  The government had two choices:  repudiate the debt, or pay it off by printing currency.  The government chose to pay off the debt with newly printed notes of the Reichsbank, and the ensuing inflation effectively repudiated the debts, anyway!
[A]t the end of the war the mark was worth about half as much as at the beginning of hostilities.  A gold mark (the standard on which the paper currency is based) was worth 2.02 paper marks.  But in November 1923 a gold mark was worth one trillion paper marks. . . .
Within five years the German Reichsmark had sunk to a five hundred billionth of its value.  At the end of the was one could, in theory, have bought five hundred billion eggs for the same price as that for which, five years later, only a single egg was procurable. (Schacht, Confessions, op. cit., 151.)
What the domestic government-sponsored inflation did not finish off, the reparations did.  The first 1 billion Reichsmarks payment, in gold, in August 1921, followed by the second payment of 362 million Reichsmarks in March 1922 and the Treasury Bills hypothecated to Belgium in August, 1922 in the amount of 254 million Reichsmarks (a total of 1,622 million Reichsmarks, or about U.S. $500 million) finished off the Reichsmark once and for all. 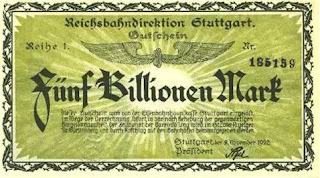 During the rest of 1922, the Reichsmark fell steadily against other currencies.  A U.S. Dollar comparison is useful.  In July 1921, the Reichsmark was pegged at 81 to the Dollar.  In June 1922, with the assassination of German statesman Doctor Walther Rathenau, the Reichsmark plunged to 600 to the Dollar. After the first reparation payment was made in July 1922, the Reichsmark went down to 670 to the Dollar.  In October, after the payment to Belgium, it dropped to 45 hundred, then 8 thousand a month later.  On January 9, 1923, when the Allied Reparations Commission confiscated the industrial might of the Ruhr Valley until Germany met demands for payment (rather like locking up a debtor in prison until he can pay), the Reichsmark fell to 10,200 to the Dollar, and in July 1923, it had hit 1 million Reichsmarks to the Dollar.
April 1923 marked the beginning of the hyperinflation.  Prices began rising at an unbelievable rate.  Simply transporting enough currency to purchase a single item became a serious problem.  Even wheelbarrows were insufficient.  Printing presses began working day and night simply to turn out enough high-denomination notes to make transactions easier to carry out, but the task was hopeless.  The inflation rate was rising so fast that it was impossible to provide enough currency to match the prices.  By October 1923, 50 Million Reichsmark notes were being printed.  In February 1924, notes of 100 Billion Reichsmarks were in circulation.