One thing the German government discovered very quickly after agreeing to an Armistice to end the First World War was the fact that the different sides each seemed to have a different idea of what “Armistice” meant.  To the Germans it meant cessation of hostilities and a return to the situation immediately preceding the outbreak of the war, with appropriate payment for violations of international law. 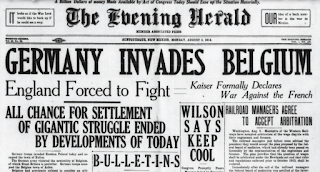 To the French and the English, however, it meant that the Allies had won the war.  Now was the time to exact revenge for the Franco-Prussian War and the violation of Belgian neutrality.  This was made possible only by the fact that the United States was strong enough to permit France and England to enforce their demands, and Woodrow Wilson was too weak to prevent them from manipulating the United States to get what they wanted.
The fact that Germany and Austria-Hungary were now conquered territories was made painfully obvious to the German members of the Reparations Commission.  As Hjalmar Schacht related,
Our reception reminded me vividly of illustrations in my school history books: Persian Satraps receiving a Deputation from defeated Athens.
A positively medieval arrogance characterized the members of the Allied Commission.  Not only was there no question of chivalry — there was also a complete lack of common civility.  I remember one occasion when not enough chairs had been provided for the Germans so that most of the German members of the Commission were obliged to take part in the discussions standing.
I made no secret of my disgust at this churlish treatment.  My fellow members of the Commission were frankly nervous.
“For goodness sake, Doctor,” one of them whispered to me.  “You can’t do that!  You can’t go lodging complaints!”
“I’ll soon see if I can’t lodge complaints,” I said, and went across to the Allied general who presided at the meeting.
“We have been accommodated in the worst hotels; the food is wretched; we are prevented from going out; our movements are restricted and we are obliged to stand during the negotiations with our Allied partners.”  I was furious.  “I would ask you if you please, General, to remedy these deficiencies.”
“You seem to forget that your country lost the war,” was the frigid reply. . . .
My visit to The Hague brought me up against the problems of reparations for the first time.  It was to give me plenty to do in the years ahead.  (Schacht, Confessions, op. cit., 149-150.)

More than anything else, the reparations issue caused lasting anger.  The fact that it triggered the hyperinflation that followed the war was a matter of fear, but it was the sheer injustice of the whole thing that, ultimately, allowed Hitler to assume power by playing off on it.  As Schacht recalled,

The reparations demands of the Allies after World War I aroused national resentments, and resentments are not a good foundation for a peaceful foreign policy.  Both Right- and Left-wing extremists made capital out of the increasing political bitterness, the growing economic distress in Germany, till in 1932 they eventually created a situation where the only question was whether the Left or the Right would be the first to achieve its object.  Two simple calculations go to show that:
The Communist Party, which had entered the Reichstag on June 6, 1920, with two seats, possessed exactly one hundred seats on November 6, 1932 (twelve years and five months later), and with twenty votes behind the GSP [German Socialist Party], was the third biggest party in Germany.
Hitler’s National Socialists, however, who under that name had stalked into the Reichstag on May 20, 1928 with only twelve deputies, had nearly two hundred seats in 1932, and had become the strongest party in Germany.
The politicians, who had brought about this situation by their astronomical demands on the Reich, who refused to be dissuaded from their economic folly, today disclaim all responsibility and wash their hands of the whole business. (Ibid., 148.)
Of course, the "Right" and "Left" wing extremists to which Schacht referred were the right and left wings of socialism.  He was under no delusion that any form of socialism was acceptable, but acknowledged that they were simply different ways of putting the collective in power over individuals.  Socialism has some good, of course, as the popes have always maintained.  The problem is that all socialism, whether or not it has any good, is based on a concept of society "utterly foreign to Christian truth" (Quadragesimo Anno, § 117), viz., that rights come from the collective, not the human person.

As for reparations, Belgium, whose claims were considered perfectly legitimate even by Germany, were settled fairly quickly.  France demanded the return of Alsace and Lorraine, as well as reparations for the damage to the areas that had been the site of four years of bloody conflict.  This, too, could be deemed nothing more than simple justice.
Then came the pillaging.  There soon came a large number of additions to the indemnities and reparations.
Woodrow Wilson, too weak to resist and apparently forgetful of his Fourteen Points, joined in the feeding frenzy.  The Allies began demanding payments for virtually every possible contingency.  The goal was to force Germany and Austria to assume the full cost of the war, both in material and immaterial areas, while assigning a monetary value to everything, whether or not actual monetary or material loss was involved.
There was more.  Unjust as the reparations were that Prussia had forced on France in 1871, France had been left with much of her productive capacity intact, although severely crippled by the loss of Alsace-Lorraine and the near-ruin of the French wine and sheep industry.  When the genius of Louis Pasteur contained the problems of bacterial infestation and anthrax, however, the French Republic not only paid the entire indemnity in less than three years, but even regained a large measure of prosperity. 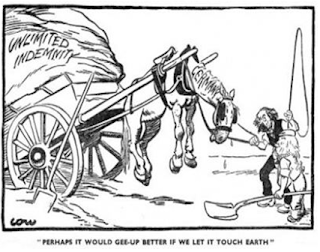 This was not the case in 1919.  As John Maynard Keynes explained in great detail in the economic study that made him famous, The Economic Consequences of the Peace, Germany was not only faced with enormous reparations payments, far in excess of what reasonably could or should have been levied, but also most of her natural resources, all the gold reserves, and virtually every productive asset imaginable except the land itself were confiscated.  Germany was left with a cosmically huge reparations debt, and no means to pay.  The same story was repeated in Austria and the newly independent Hungary.
If that were not enough, horrifying conditions existed throughout Central Europe because of the blockade that was maintained in place for nine months following the Armistice.  Absolute economic chaos reigned.
#30#
Posted by Michael D. Greaney at 6:00 AM