Adding to the problem of mere quantity of currency in Germany during the hyperinflation of the 1920s was the almost infinite “Velocity of Money” that resulted.  The “Velocity of Money,” the rate at which money is spent, went to the maximum as people rushed to spend whatever currency they had before it lost any more value.  As any monetary economist will quickly tell you, this effectively multiplied the amount of currency in circulation immensely, adding to the rate of inflation like pouring gasoline on highly inflammable material. 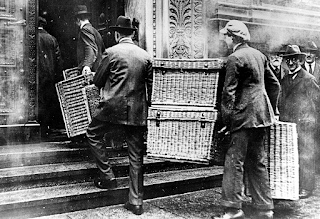 Stores refused to sell what little stock they could acquire except for hard foreign currency.  Farmers refused to bring food into the city.  While foreigners were buying everything in sight at a pittance, ordinary people were starving to death.  As the London Daily Mail reported on August 6, 1923 in an interview, “Villagers who used to send butter to Berlin are no longer troubling to do so.  They already have crates in their cottages packed with worthless paper money.  ‘Why get more’?  A workingman said to me: ‘We used to talk about the stupid peasants, but now they are laughing at us.’”
A number of expedients were tried both to provide circulating media and, possibly, call a halt to the tremendous rate at which money was losing its value.  In October 1918, interest coupons on government war bonds were temporarily declared legal tender.  In October 1923, interim notes of the Reichs Bank for Treasury Certificates, partial bonds of the treasury certificates, and whole treasury certificates of the Reich were declared legal tender.  These were denominated in gold Marks and U.S. Dollars. 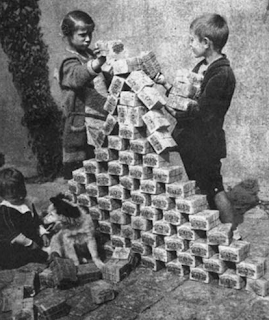 For a short time, an attempt was made to stamp the old silver coins of the Second Reich (for virtually no gold coin existed in Germany) with countermarks indicating their value in inflated currency.  Private individuals, businesses and municipalities issued Notgeld (“Un-money”) to provide the crying need for anything to carry out transactions.  Postage stamps, special privately-issued micro- and fractional-currency, commodity-backed municipal bills of exchange in small denominations, such as a quarter measure of wheat . . . almost anything that could be conceived as currency was pressed into service, limited only by the imagination or desperation of the people.
To be able to carry out transactions and continue in business, enterprises resorted to issuing bonds denominated in commodities.  As Hjalmar Schacht recalled,
Many business firms took to paying their workpeople with foodstuffs.  But that was only an imperfect and partial emergency measure.  Firms requiring capital for business and investment adopted the practice of issuing bonds in respect, not of money, but of coal, electric kilowatt-hours, potash, cement, and so forth which constituted the real value of such bonds. (Schacht, Confessions, op. cit., 153.) 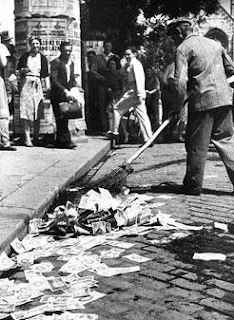 Regular coinage rapidly became a thing of the past.  When it cost hundreds of thousands times the face value to mint a single coin, issuing coins represented a pure drain of resources and effort.  While a few of the regular issues of the Second Reich had been continued for a short time by the Weimar Republic (the Five and 10 Reichspfennigs in iron and zinc), their face values were ridiculously low in view of a price level that increased by tens of thousands of Marks per hour.  Anything less than 1 million Reichsmarks soon ceased to have any meaning, as did anything less than 1 billion Reichsmarks within a very short time.
Nothing like this had ever happened before.  Its effect on the German psyche is beyond calculation.  We today can look at instances of hyperinflation, even that of the former Yugoslavia that has surpassed that of Germany in the early 1920s, and know that, bad as it may be, there can, somehow, be an end to it.  Germany in 1923 had no such assurance.  For all they knew, the absolute chaos was a permanent condition, a social and economic Armageddon following four years of total war that in itself had seemed like the end of the world.
#30#
Posted by Michael D. Greaney at 6:00 AM