Quite a few items on the economic and social justice front this week, so we’ll get right to it:

• Our receipt last week of a very rare copy of Msgr. John A. Ryan’s autobiography, Social Doctrine in Action (1941) raised a few questions.  Some of the odd omissions led us to do a search of newspaper archives before and after the book’s publication to see if we could come up with something to fill in the blanks.  What we found was far more than we expected.  For example, we discovered that, while Msgr. Ryan, noted as “Father of the Minimum Wage,” and Fr. Charles Coughlin, the noted “radio priest,” were once on friendly terms (Msgr. Ryan once declared that Fr. Coughlin was “on the side of the angels” — Donald Pond, “The Crusader of the Air: Boos for Al [Smith] Mark Father Coughlin’s Attack on ‘Happy Warrior’,” The Pittsburgh Press (Pittsburgh, Pennsylvania), Tuesday, January 9, 1934, 21), Msgr. Ryan attacked him bitterly when Fr. Coughlin began criticizing FDR and the New Deal (“Monsignor Raps Father Coughlin: The Right Rev. John A. Ryan Speaks Under Democratic Auspices,” The Spokesman-Review (Spokane, Washington), Friday, October 9, 1936, 2), and Fr. Coughlin returned the favor with interest (“Father Coughlin Will Answer Monsignor Ryan,” Lewiston Daily Sun, October 2, 1936, 1).  It got so bad that Archbishop Michael Curley of Baltimore called on both Msgr. Ryan and Fr. Coughlin to “do a great favor to the church [sic] and to the country at large” by “retir[ing] for some time to the Carthusian order, where perpetual silence is observed.” (“Church Organ Raps Priests: Paper Says Coughlin And Ryan Should ‘Rest A While’,” Reading Eagle, October 16, 1936, 2; “Coughlin and Ryan Asked to ‘Shut Up’,” The Florence Times, October 16, 1936, 1).  The future Pope Pius XII refused to have anything to do with either of them.  (“Cardinal Pacelli Arrives in New York for Visit,” Lewiston Daily Sun, October 2, 1936, 1.)  Msgr. Ryan’s students and associates attacked Fulton Sheen repeatedly, using an organization called “the Catholic Radical Alliance” as a bully pulpit to advance Msgr. Ryan’s social programs. (George A. Coleman, “Links Alliance With Fascist Forces,” The Pittsburgh Press, Friday, July 30, 1937, 19; “Rev. Rice Hits Msgr. Sheen’s Labor Views: Catholic Radical Alliance Spokesman Replies to Orator’s Charges” The Pittsburgh Press, Wednesday, March 2, 1938, 5.)  There were a number of calls for a planned economy and greater State control of business.  (“Says Planned Production Is Nation’s Need, Monsignor Ryan Speaker At Catholic Social Action Congress,” Pittsburgh Post-Gazette, June 13, 1939, 3.)

• While all of that was interesting to find out about Msgr. Ryan, most surprising was the report of a talk the Father of the Minimum Wage gave at Howard University on March 2, 1943, before an audience consisting almost entirely of Black Americans, in which he insisted that segregation (“jim crow”) was essential to prevent intermarriage of Blacks and Whites.  (Michael Carter, “Colored Girls May Not Live in Catholic University Dorms: Rev. John Ryan Says Two on Campus Are Haitians, but That Is Different,” Baltimore Afro-American, March 20, 1943, 14.) At one point Msgr. Ryan attempted to tell a “joke” in extraordinarily poor taste (to say the least), using a word that starts with “n”, ends in “r” and has "ig" in the middle not generally used in polite company even in 1943 — much less before a Black audience — whereupon “The audience gasped.  That epithet had not been heard at Howard University in a good many years from the platform.” (“H.U. Gasps as Monsignor Uses Epithet,” Baltimore Afro-American, March 20, 1943, 14.)  Other sound bites included, “Of course, intermarriage is out.”  “I don’t know any reasons for a mixed army.”  “[E]conomic equality does not go hand in hand with social equality. . . . There is a border between economic equality and intermarriage.”  “Jobs are the most important things.”

• Early today we sent an outreach letter to the Notre Dame Center for Ethics and Culture regarding the Fourteenth Amendment to the U.S. Constitution.  CESJ’s contention (based on the analysis of William Winslow Crosskey in Politics and the Constitution in the History of the United States, Chicago, Illinois: University of Chicago Press, 1953) is that the current interpretation of the Fourteenth Amendment is based on the egregiously incorrect U.S. Supreme Court decision handed down in the Slaughterhouse Cases of 1873.  We invited Dr. O. Carter Snead, Director of the Center for Ethics and Culture, to give Dr. Norman Kurland (who had Crosskey for Constitutional Law when he attended the University of Chicago Law School) a call to discuss Crosskey’s analysis in light of CESJ’s proposed pro-life economic agenda.  CESJ has also submitted a proposal for a paper to be delivered at the annual conference in October at Notre Dame.

• Members of the CESJ core group had a meeting on Monday with Bishop Don Williams.  Bishop Williams was referred to CESJ by the Rev. Virgil Wood of Houston, Texas, a long-time supporter of CESJ.  Bishop Williams is active as a leader in Bread for the World, and is interested in the Just Third Way as possibly having the potential to bring a just and sustainable solution to poverty.  Bishop Williams likes the idea of the Just Third Way with its emphasis on power, private property, and justice, and the linkage of economics and ethics.

• Father Edward Krause, C.S.C., Ph.D., former professor of social ethics at Gannon University and member of the CESJ Board of Counselors, is following up on the application for the imprimatur for Easter Witness (below).  Father Krause has been very active at working to arrange for members of the CESJ core group to speak in venues in colleges and universities, where the Just Third Way might have the potential to resolve a number of the problems that have been cropping up in the Groves of Academe. 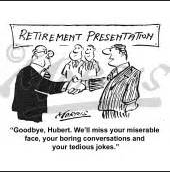 • Evidently the much-vaunted “recovery” still hasn’t reached beyond Wall Street and gotten down to ordinary people.  In “‘I’ll Never Retire’: Americans Break Record for Working Past 65.” there are five reasons given for more older Americans continuing to work past “retirement age.”  Number One? They need the money.  Sixty percent gave money as their primary reason for working past “retirement age.”  Next (36%) was they just like their jobs . . . which means that 74% of Americans don’t like their jobs. . . . Next is that people are living longer and healthier, and want something to do.  Then, employers want (some) experienced workers to stick around longer, and — finally — is that retirement isn’t any fun.  Evidently two weeks of doing nothing is about the maximum before some people start going crazy.  From the perspective of the Just Third Way, of course, this raises concerns about two issues: 1) The wage system’s inability to provide adequately for retirement, and 2) Whether the concept of “retirement” even makes sense in an ownership economy.

• As of this morning, we have had visitors from 50 different countries and 44 states and provinces in the United States and Canada to this blog over the past two months. Most visitors are from the United States, the United Kingdom, Brazil, Australia, and South Africa. The most popular postings this past week in descending order were “Thomas Hobbes on Private Property,” “The Purpose of Production,” “Financial Resilience,” “Aristotle on Private Property,” and “Reaction to Resilience, I: Can the State Create Money?”