It was not until November 1923, that effective action was taken to stabilize the currency.  On November 13, 1923, Doctor Hjalmar Horace Greeley Schacht (born in Tingleff in what is now part of Denmark, but his parents, both German, were married in New York City, and, apparently, admirers of that city’s periodicals) was appointed Commissioner of National Currency.  He was given a free hand in all questions of money and credit.  His sole priority was to halt the inflation that by this time had become an inferno. 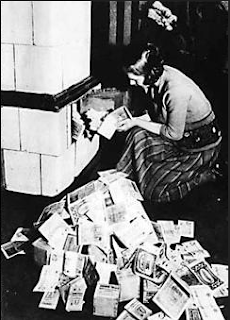 Doctor Schacht’s goal was to return the Reichsmark to its pre-war valuation of 4.2 to the U.S. Dollar.  The first step was to “freeze” the inflation rate on November 20, 1923, when the Reichsmark hit 4.2 trillion to the U.S. Dollar.  It is interesting to note that, at this exchange rate, one cent in U.S. money would have more than repaid the entire German National Debt in 1914, several times over.
In spite of this official fixed rate, however, currency speculators on the black market attempted to keep inflation going, and the underground rate reached 12 trillion Marks to the Dollar before the end of November.  As the situation came under control, however, the speculators lost large amounts, due primarily to Doctor Schacht’s insistence on maintaining the official exchange rate at 4.2 trillion Marks to the U.S. Dollar.  According to Doctor Schacht’s autobiography, Confessions of the ‘Old Wizard’, there were three “official” currencies presumably in circulation at the end of November, 1923:  the old imperial Gold Reichsmark, the Paper Reichsmark, and the new Rentenmark.
The new Rentenmark was backed by State mortgages on public lands, including the railroads, and pegged at 4.2 to the U.S. Dollar.  Issues in excess of the value of the land backing the currency were absolutely forbidden.  The old, inflated Reichsmark would be demonitized and replaced with a new, revalued Reichsmark pegged to the Rentenmark, which was in turn pegged to the U.S. Dollar.  While the amount of Rentenmark non-legal tender reserve currency was strictly limited and inelastic, the new legal tender Reichsmark currency was elastic, the amount varying directly with the bills of exchange accepted by commercial banks and rediscounted at the Reichsbank, and qualified private sector securities purchased in open market operations, thereby ensuring an asset-backed, elastic legal tender currency in tandem with an inelastic, asset-backed, non-legal tender reserve currency. 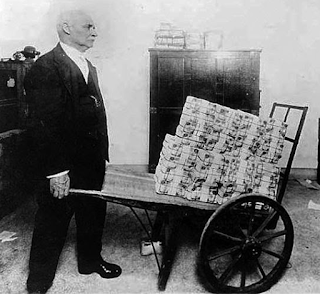 Despite the seeming complexity of the system, it worked.  Some people credit the confidence that Doctor Schacht personally exuded in his new system with halting the hyperinflation.  Doctor Schacht was appointed “President for Life” of the Reichsbank on 22nd December 1923.  He served the Weimar Republic until stepping down in 1930 over some issues regarding the handling of certain reparations payments.
As noted, the Rentenmark was a legal currency, but it was not legal tender.  This was to prevent the currency speculators from demanding payment in new Rentenmarks for debts incurred using old Reichsmarks.
As a result, due to this legal technicality (and despite the fact that the Weimar Republic was socialist), Rentenmark loans were distributed through the Reichsbank, at this time construed as a private sector central bank instead of an effective branch of the government that Keynesian economics would demand, rather than sold directly by the government through the Treasury.  This move had the effect of helping to restore confidence in the central bank.  In order to deal at one blow with the huge mass of grossly inflated official currency, the large amount of emergency currency and the speculators, a short redemption period was established, during which 4.2 trillion Marks would bring one U.S. Dollar or 4.2 Rentenmarks.  The Rentenmark’s lack of official legal tender status made it possible to use American currency as an option in the exchange.
Within a year the currency had been stabilized to a degree that allowed the government to re-implement a standard currency system, using the central bank, and, presumably, issuing coin and currency in the quantities demanded by the needs of business and commerce.  This system returned to the old name of Reichsmark, and the Rentenmark system was phased out, although the coin and currency continued to be accepted at par with the newer issues until 1948.
The only thing missing from the reform was a program encouraging widespread ownership of productive assets.  This would have made the German economy and currency the soundest in the world.  One cannot, however, blame Germany for failing to do what no one else was doing.
One of the most terrifying immediate results of the reparations payments had been resolved, but the resentment over reparations remained, together with the fear that the hyperinflation could return at any time.  The country looked for a leader who could make Germany great again, and was phenomenally successful . . . for a while.
#30#
Posted by Michael D. Greaney at 6:00 AM