As we saw in the previous posting on this subject, it is not enough, even in materialist terms, just to see that people have enough to ensure their material wellbeing.  Human beings also want to be useful and productive. To think of people only as consumers is to leave out two-thirds of the economic equation.  In order to be able to consume, it is essential that what is consumed must first have been produced, and that the product get from the producer to the consumer.

If you produce something that is not useful and not intended to be such, and you derive no benefit from the effort itself — except perhaps income to enable you to consume — you have wasted time and resources and have not been useful.  It contradicts human nature and is degrading to perform tasks and produce goods and services that have no purpose other than to provide consumption income.

To conform to the meaning and purpose of life, economic activity must conform to human nature, which is to be both a producer and a consumer of that which is produced.  This is the basis of the “Smithian school” of classical economics (so called as it is based on the economics of Adam Smith),as it is of Catholic social teaching as it relates to economics, as well as any other natural law-based faith or philosophy.

This becomes obvious when we go more deeply into Smith’s first principle of economics, that production is only for consumption, and nothing else.  For starters, it necessarily implies that production must precede consumption . . . and not by coincidence flatly contradicts a fundamental principle of the “Ricardian school” of classical economics (so called as it is based on the economics of David Ricardo), which also underpins socialism and virtually the whole of modern economics.  Widespread acceptance of this incorrect principle is one possible reason people find the Great Reset and similar proposals even tolerable.

To explain, if production can only be financed out of existing or past savings, there must be pre-existing production to refrain from consuming in order to be able to accumulate savings.  Put another way, if unconsumed production is the only source of financing for production, production must precede itself.

This past savings assumption violates the first principle of reason on which the whole of Aristotelian philosophy — and that of Saint Thomas Aquinas — is built.  That is, nothing can both exist and not exist at the same time under the same conditions.  The theory that no production can take place unless production has already taken place dissolves into nonsense.

Not by coincidence, then, Jean-Baptiste Say started with Smith’s principle that the only reason to produce is to consume, not to accumulate savings to finance future production or provide people with income by performing useless tasks.  In his debate with the Reverend Thomas Malthus (author of the Essay on Population, 1797), Say baffled Malthus by pointing out that in order to consume, one must first produce.

According to Say, if you want to consume something, you must either produce it yourself, or produce something to trade to someone else if that someone else has what you want to consume.  In addition, production is not by the human factor — labor — alone.  Production is the result of both human and non-human factors, which Say categorized as labor, land, and capital, although what Say meant by “capital” is better understood as “technology.”  If someone’s labor, land or technology is not enough to produce a sufficiency, then he must find the right combination of factors to do the job.

This is “Say’s Law of Markets,” and is the way a natural law-based economy works.  Production is for consumption, and if you want to consume, you must first produce.  As Say’s Law is usually summarized, “Production equals income, therefore, supply (production) generates its own demand (income), and demand, its own supply.”

Fortunately for the future of the human race and freedom from the past savings assumption, promises — contracts — as well as existing production have value.  If someone has something you want, but you have nothing he wants, you can promise him that if he gives you what you want now, you will give him what he wants in the future.  If you trust one another to keep your promises, you have a deal.  Money has been created by the extension of credit. 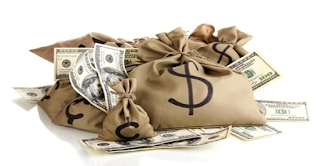 There are thus two types of legitimate money.  These are, one, past savings money representing existing production.  Two, there is future savings money, representing production not yet in the possession of the one promising to deliver it in the future, but which the people accepting the promise believe he will have at the agreed-upon time.

Looking at the proper use of money reveals what appears to be a fundamental weakness in the Great Reset and similar proposals.  Without exception — or at least any that we have found — the idea is not to make people productive and useful, but to provide as many people as possible with the power to consume what other people have produced.  This is contrary to the human need to be useful, and also contradicts the common sense of Say’s Law.  There is also the ancient prohibition against usury — which is not what many people believe, and that we will look into in the next posting on this subject.