The various communications media keep touting “the recovery” and the fantastic “economic growth” . . . and at the same time insist on the need for raising the minimum wage, family assistance, Universal Basic Income, a Great Reset, Inclusive Capitalism, Democratic Socialism, and so on, because individuals and families just aren’t making it.  Why aren’t they calling for economic personalism so that everyone can participate in growth instead of trying to figure out more creative ways of redistributing what others produce?.

• Growth and Recovery.  The media keep touting growth, but very little of the benefit seems to flow to anyone but the currently wealthy, whose riches have expanded enormously over the past year.  What no one points out is that the bulk of the so-called growth is in the stock market and increased government spending, neither of which is geared toward producing marketable goods or services — the stock market is a secondary market that produces nothing, but buys and sells existing debt and equity, while government services are not (or shouldn’t be) marketable.  The whole purpose of economic activity (and thus economic growth) is the production for consumption of marketable goods and services.  This is the whole point of Adam Smith’s first principle of economics and Say’s Law of Markets.  Production for any other purpose is waste.

• American Families Plan.  According to a Washington Post article of April 29, 2021, “Details of Biden’s $1.8 Trillion American Families Plan” (A-21), the idea is to vest America’s families with consumption power of one form or another, allegedly to be funded by increased taxes on the wealthy.  There are a number of problems with this, not the least of which is that making families dependent on outside sources for their consumption needs destroys families instead of restoring them.  When both parents worked at home on the farm or in a family owned business, families tended to be strong.  With the Industrial Revolution and at least one parent working away from home, the family was considerably weakened, but generally held together by the increased economic dependency on the “primary breadwinner,” a new concept that substantially changed the relations between men and women as women changed from being partners to support staff.  With the increase in government assistance, the primary breadwinner status began shifting from one or both of the parents, to the State, and the decay of the family accelerated.  The move to making families primarily dependent on the State for consumption income will inevitably weaken family bonds still further.  If President Biden really wants to help families, he should shift focus from consumption to production, making it possible for everyone to be productive through both labor and capital ownership, making it more advantageous for families to stay together to aggregate resources than to make them dependent on others.  The Economic Democracy Act would go a long way to restore families instead of tearing them further apart. 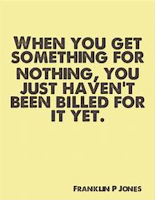 • College Free Tuition.  In the same issue of the Washington Post — on the same page, in fact — another article says that “College Leaders Praise Biden’s Free Tuition Plan.”  We’ve written about this before.  While many people praise countries in Europe that have universities with “free tuition,” they leave out the rest of the story.  What they don’t tell you is that the “free” tuition is always made up in other ways, such as the endless and costly fees for everything that was formerly covered by tuition.  Also, it often happens that tuition per se is not the problem, but the other costs of living, books, and everything else.  “Free tuition” is like the marketing loss leader to get you into the store where you buy other, more expensive items, or the inexpensive Barbie doll with the high-priced accessories.

• Funding By Taxation.  According to Hauser’s Law, the United States has typically collected approximately 19.5% of GDP in taxes.  Historically (by some theory we can’t remember the name of) it’s been assumed that it is difficult to sustain any tax system that collects more than 20% of GDP.  Of course, some of the developed countries have tax collections in excess of 40%, but there are two hidden factors in there.  One, developed countries usually have more social services and transfer payments, distorting tax collections by “double counting,” as it were.  Taxes returned to citizens are usually spent and counted into GDP, making the effective tax collection much lower than the objective amount collected.  Two, funding government expenditures using debt also lowers the effective tax rate through the “hidden tax” of inflation that artificially increases tax collections using inflated currency.  The bottom line here is that, while we assume President Biden’s heart is in the right place, he simply can’t realistically think about funding his social programs by increasing taxes.  The only way to go is to do something to make more people productive, thereby increasing people’s income naturally and reducing the need for social programs at the same time.  This is yet another reason why the U.S. (or anywhere else) should adopt the Economic Democracy Act as soon as possible. 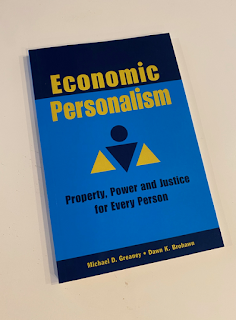 • Blog Readership.  We have had visitors from 38 different countries and 37 states and provinces in the United States and Canada to this blog over the past week. Most visitors are from the United States, Argentina, Canada, the Philippines, and India.  The most popular postings this past week in descending order were “A New Look at R.H. Benson’s Lord of the World,” “A Short Treatise on Sovereignty,” “The Democratic Religion,” “News from the Network, Vol. 14, No. 16,” and “Getting Real About Money.”