More and more, it seems as if people and policymakers are avoiding coming to grips with what is really needed in today’s world: a way that will allow most people to lead productive and virtuous lives (however they might define virtue in their particular philosophical or religious framework) without having to depend on the rich or the State to provide for or secure their every need.  Why not a world in which everyone can be productive with capital, labor, or both?

• EDA Resolution Introduced in Missouri.  Missouri State Senator Karla May has introduced a resolution into the Missouri legislature, calling on Congress to adopt the Economic Democracy Act.  There is also a bill, modeled on one passed by the Illinois House a few years back, that would allow for Citizens Land Development Cooperatives to rebuild St. Louis without having to use taxpayer money and that would vest ownership in the residents of the area instead of giving it away to developers who often do not even live in the area or have any interest in the community except how to profit from its development and export the profits out of the local economy.  Here is a link to the Missouri Resolution SCR 18, here is a link to a brief summary of the resolution, and here is a list of the Missouri Senate's actions so far.

• Political and Economic Democracy.  In the Wall Street Journal of April 14, 2021, William A. Galston comments on the latest Global Trends report from the National Intelligence Council, a quadrennial document that that tries to analyze where the world might be headed if things remain unchanged (“Democracy Promotion in a Dangerous World,” WSJ, 04/14/21. A-17).  Galston notes that “the most recent pro-democracy wave began in the mid-1970s,” peaked in 2005, and has been on a downslide ever since.    The report — and Galston — goes on at some length about the need for more democracy and ways to encourage it . . . but without saying, exactly, how to do it.  From our perspective, what’s interesting is the fact that the current pro-democratic wave began at almost exactly the same time as the ESOP was embodied into law in the U.S., and petered out as the ESOP maxed out as well.  Interestingly, Galston cites President Ronald Reagan’s speech calling for a restoration of democracy, but without mentioning his call for an Industrial Homestead Act, what today we call “the Economic Democracy Act,” acknowledging that political democracy cannot survive without economic democracy.

• Bitcoin Investment?.  Investment guru Jim Cramer has announced that he paid off the mortgage on his house by investing in Bitcoin.  More precisely, he declared that he paid for his house by buying Bitcoin.  There are a few things wrong with his statement.  For one, he didn’t pay off anything by buying Bitcoin, but by selling Bitcoin — something entirely different.  Further, it was not an investment, but a speculation.  Strictly speaking, “investment” refers to putting your money into some asset that generates income by producing a marketable good or service.  “Speculation” refers to making a profit — or taking a loss — by buying and selling the asset itself.  The critical economic need in today’s world is not more ways for people to speculate in what other people have produced, but to become productive, thereby earning a living income by being productive instead of gambling with the productions of others.  The Economic Democracy Act is intended to do just that.

• Ownership for the Disadvantaged.  The National Center for Employee Ownership reports that the Aspen Institute has come out strongly in favor of promoting ownership among those whom they call “disadvantaged” . . . which in our lexicon could mean anyone who does not have access to the means of acquiring and possessing private property in capital.  The Aspen Institute seems to define “disadvantaged” as non-white, non-male, groups that, admittedly, lagged behind white males in wealth accumulation in our world that takes automatic scarcity for granted.  The problem with targeting certain groups to benefit from something inevitably comes across as being at someone else’s expense, whether or not it really is.  Yes, something must be done to open up equal opportunity for the disadvantaged, but it must truly be equal, not equalizing — the difference between equality of opportunity and equality of results.  If we want to avoid resentment, however, everyone must benefit, not just selected groups.  One such possibility is the program advocated by the Descendants of American Slaves for Economic and Social Justice, headed by Eugene Gordon, that takes a universal approach to reparations.

• Student Loan Forgiveness.  Rumor hath it that President Biden is considering a measure that would forgive student debt.  We see a few problems with this.  For one, it forces the U.S. Taxpayer to subsidize someone else’s education.  It also encourages students to assume debt  if they are reasonably assured that they will not have to pay it.  Educational institutions are thereby encouraged to increase the costs of education . . . whether or not “free tuition” is instituted.  (In Europe, the so-called “free tuition” is considered something of a scam by students forced to pay higher costs for everything else.  It turns out that tuition is not always the biggest cost of education.)  If President Biden really wants to solve the problem, he might consider pushing for a program that will 1) return education to its original purpose of education instead of job training, and 2) provide students, teachers and everyone else with a capital income sufficient to meet educational needs.  Such a program is the Economic Democracy Act, which would go a long way toward solving a host of other problems, as well. 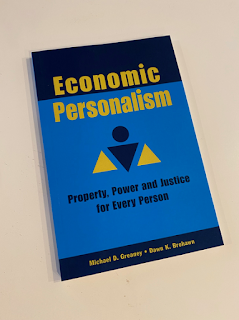 • Blog Readership.  We have had visitors from 26 different countries and 31 states and provinces in the United States and Canada to this blog over the past week. Most visitors are from the United States, India, Canada, Brazil, and Germany.  The most popular postings this past week in descending order were “The Purpose of Production,” “News from the Network, Vol. 14, No. 14,” “From Need to Greed,” “On Utility,” and “Did C.S. Lewis Approve of Socialism?”