Are you ready yet for a sane economy and social order?  Or do you think you can stick it out with the status quo a little longer?  If your mind still isn’t made up, maybe this will help bring you to a more reasonable frame of mind: 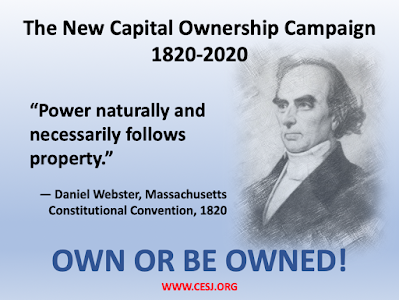 • The New Capital Ownership Campaign?.  This year marks the Bicentennial of the amendment of the U.S. Constitution to allow white males over the age of 21 to vote without having to meet a property requirement.  This, of course, was a step in the right direction of universal suffrage . . . but it was still somewhat off the right path of respect for the dignity and sovereignty of all human persons: giving the political vote is less than half the job.  Political democracy can only be meaningful if supported by economic democracy.  Benjamin Watkins Leigh and Daniel Webster were not being elitists when they insisted that voters should be property owners, they were stating a simple fact: power follows property.  “Property” will either seize power, or “power” will take over property.  The real solution is not simply to give everyone access to the ballot, but to open up access to the opportunity and means for everyone to become capital owners as well, through something like the Capital Homestead Act. 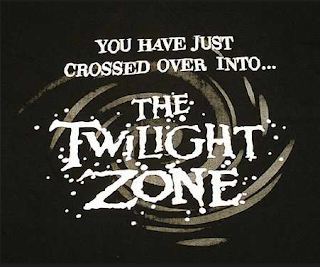 • Financial Reality Check?.  It starts to get a little surreal (or a lot weird) when on the front page of today’s Wall Street Journal it announces that “the banks” face a potential loss of almost $1 trillion due to bad loans . . . which they wouldn’t be concerned with if 1) Capital Homesteading was in place and 2) loans were secured with capital credit insurance.  (“Fed Sets Caps on Bank Payouts Amid $700 Billion Loss Threat,” Wall Street Journal, 06/26/20, A-1, A-7.)  That was bad enough.  Then we turned to page B-11 in the same issue . . . and discovered that “Banks Ignite Late Turnaround for Stocks.”  The DJIA ended up 300 points higher, “led by shares of banks.”  Entering the Twilight Zone, a few minutes ago as of this writing, the DJIA was down 555 points (at least it wasn’t 666) due to a poor showing by banks on “stress tests.”  Comment at this point would probably be superfluous.  And completely unnecessary.

• William Winslow Crosskey.  Many years ago, William Winslow Crosskey taught constitutional law at the University of Chicago.  Crosskey, possibly the greatest authority on constitutional law in the twentieth century, was also an indefatigable researcher and a world-class scholar.  His life’s work was Politics and the Constitution in the History of the United States (Chicago, Illinois: University of Chicago Press, 1953), unfortunately left incomplete at his death in 1968, but the two volumes published in 1953 are still an invaluable resource, especially for anyone who takes the Aristotelian-Thomist personalist position.  All this is to explain why we were gratified this week to receive a near-pristine copy of the original two volumes, an extremely valuable addition to the CESJ research library that will likely become the core of the library of Justice University.

• Jacques Maritain and Personalism.  We started rereading Jacques Maritain’s 1947 classic The Person and the Common Good (mostly from articles published in 1946) in preparation for what we hope is an upcoming book on the Thomistic personalism of Pope John Paul II . . . don’t worry, the idea is not only to put his thought in historical, cultural, and religious context, but to make it more accessible to ordinary readers such as ourselves.  We started rereading Maritain’s book — it’s very short, barely 100 pages — when we learned that Maritain’s personalism had an influence on that of John Paul II once Maritain broke with Emmanuel Mounier and his radical “Anarcho-Christian” version of personalism.  We found Maritain’s book to be much more understandable this time around, probably because we’ve done so much research into economic personalism while writing the book on that subject that is due out soon.

• Volunteers.  CESJ has been getting a remarkable number of volunteer applications, which attribute in part to the fact that CESJ has a proposed solution to the current economic and social malaise that doesn’t rely on redistribution or the hidden tax of inflation by issuing massive amounts of new government debt.  This is hard on the heels of a record seven Fellows at one time, and one of the best interns CESJ has had since the last one.

• Shaw and Stalin.  Apparently George Bernard Shaw (1856-1950) had a very high opinion of Joseph Stalin that nothing seemed to dim.  To the day of his death, Shaw kept insisting that Stalin was the greatest statesman in Europe, and that every country would have to follow the Soviet model.  After all, “People who are not fundamentally Communist are not civilized.” (“Stalin Busy at Home, Doesn’t Want War, Bernard Shaw Says,” The Evening Star, Washington, DC, November 2, 1948, A-2.)  Also, “Under the pressure of practical application the Soviet government has turned communism into Fabianism.  But the Communists won’t take our name so we must take theirs.”  (“Shaw’s Greatness Declared Vapid,” Washington Evening Star, November 27, 1931, B-11.)  Shaw, by the way, was the chief spokesman for the Fabian Society that promoted “democratic socialism” before the term became popular.

• Heywood Broun.  Remember Heywood Broun (1888-1939)?  We hadn’t thought about him for quite some time, and never knew much about him, other than that he was a member of the “Algonquin Round Table” and the author of a number of “I wish I’d said that if I had the nerve” quotes, e.g., “Everybody favors free speech in the slack moments when no axes are being ground.”  It turns out that Broun (who was converted to Catholicism shortly before his death by some fellow named Fulton Sheen) had an opinion of George Bernard Shaw as low as that of Shaw of Stalin was high.  It wasn’t because Shaw was too radical.  In a Chestertonian-type paradox, Broun thought that Shaw wasn’t radical enough to allow ordinary people to have control over their own lives.  As he said following Shaw’s return from Russia as a guest of Stalin and in response to Shaw’s fulsome (and somewhat nauseating) praise of the dictator, “I’m more radical than Shaw.  I still think mankind can establish a brotherhood which is not built on a bed of bayonets.”  (Heywood Broun, “It Seems to Me,” Indianapolis Times, September 8, 1931, 4.)
• New York Times Editorial.  According to an editorial in the New York Times of June 24, 2020, “The Jobs We Need,” the world will be saved if fixed wages and benefits are increased to a level beyond the dreams of avarice of a century ago.  The irony that the higher fixed wages go, the worse off workers become seems to escape them as the price level rises more than the wage increase, and workers get replaced by less expensive machinery. 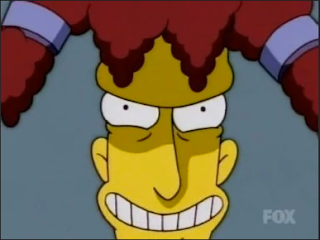 • Blog Readership.  We have had visitors from 34 different countries and 46 states and provinces in the United States and Canada to this blog over the past week. Most visitors are from the United States, Australia, the United Kingdom, Canada, and Brazil.  The most popular postings this past week in descending order were “Distributism and Economic Personalism, Part I,” “Activism vs. Leadership,” “How Not to End Racism or Be Socially Just,” “Distributism and Economic Personalism, Part II,” and “News from the Network, Vol. 13, No. 25.”