A few weeks ago we had a question about “the Commons” that, prior to the Industrial Revolution and the enclosure movement, were a (if you’ll excuse the term) common feature of everyday life for many people.  We get different forms of this question periodically, so we figured it would be a good time to answer it in a blog posting.  The question?  Were the Commons an example of agrarian socialism, i.e., land owned in common by every member of a town or village? 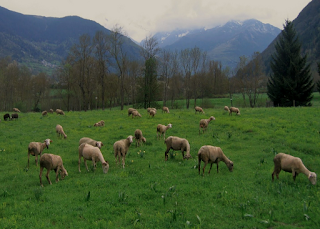 The Commons were actually slightly misnamed.  They were not common ownership, but joint ownership, like a business corporation (sort of).

Members of the community had defined ownership rights in the Commons as to the usufruct, that is, the right to use the Commons for certain strictly defined purposes.  For example, the right to graze ten cattle or gather a certain amount of firewood.

To understand how the Commons were not actually owned in common, it helps to know what “property” is.  Property is not the thing owned (in this case a certain plot of land), but 1) the absolute right every person has by nature to be an owner (“the generic right of dominion”), and 2) the socially defined and limited bundle of rights that determines what may be owned, how much, and what may be done with it.  In general, this is limited by the duty not to harm one’s self, other individuals, groups, or the common good as a while (“the universal destination of all goods”).

In sum, as Louis Kelso pointed out, property in everyday life is the right of control: control of the thing owned, including right of disposal and enjoyment of any income it generates.

With respect to the Commons, old court cases often resulted from, say, someone gathering more firewood than he or she was entitled to take, or grazing eleven cows instead of ten.  People doing that were, in effect, stealing from the rest of the community by depriving others of their defined and just due.

The enclosure movement converted joint ownership of the Commons to sole proprietorship.  This terminated the rights of the former joint owners for a one-time cash payment.  It was sort of like a corporation using money that belongs to the shareholders to purchase shares from the shareholders in a share buyback.

The “Digger Movement” is a graphic example of how people who thought the Commons were common property ran up against those who thought of them as joint ownership.  “Digger” was actually a pejorative.  Their “real” name was “the True Levelers.”

The original Levelers, although falsely accused of communism, were actually libertarians in the army of Oliver Cromwell who wanted individual rights secured to everyone except women, Jews, and Catholics.  Their opponents accused them of wanting an equal division of the world’s goods, which they vehemently denied.  They were for equality of opportunity, not results. 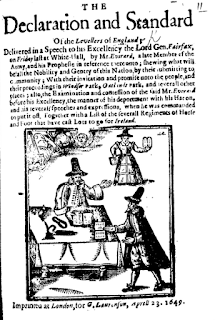 The “True Levelers” or “Diggers” were a splinter group of possibly no more than fifty or so.  Where the original Levelers were adamant that the Leveler program was not communist, the True Levelers were equally insistent that it was.

In 1649, claiming that everyone has an equal right to the produce of land and labor, a small group of True Levelers occupied some unenclosed Commons.  They had the declared purpose of raising crops and distributing the food to the poor, which earned them the name Diggers.  They managed to keep the endeavor going for a year, until dispersed by legal action by landlords, and violence by the villagers whose Commons they had appropriated in the name of the people.

The only results of the Digger experiment were a few pamphlets by Gerrard Winstanley (1609-1676).  Winstanley was a businessman bankrupted by the disruption of trade accompanying the English Civil War who claimed he had lost his livelihood due to the dishonesty of the rich.  Embittered by the crass materialism and greed of ungodly worldlings, especially lawyers and the clergy, he took refuge in religious mysticism. 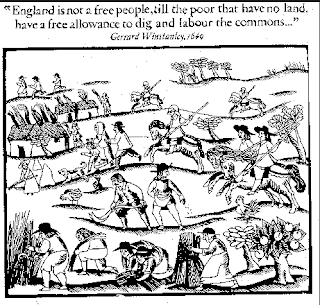 Where the Levelers carefully based their philosophy on reason, Winstanley was adamant that his was based on faith alone; “[Jesus] is the true and faithful Leveler.” (George H. Sabine, A History of Political Theory, Third Edition. New York: Holt, Rinehart and Winston, 1961, 331.)  Both Levelers and Diggers appealed to the law of nature as their justification but meant different things by it.  Where the Levelers believed that the rights of life, liberty, and — especially — private property are inherent in every man (nothing was said about women and children), the Diggers understood the natural law in a substantially different manner.  As Sabine explained,

The Digger interpreted the law of nature as a communal right to the means of subsistence, of which land was the most important, and gave to the individual only the right to share in the produce of the common land and the common labor.  The land is given by God or nature to be “the common treasury” from which all are entitled to draw their sustenance.  “None ought to be lords or landlords over another, but the earth is free for every son and daughter of mankind to live free upon.” (Ibid., 491.)

Convinced pacifists, the Diggers seem to have thought setting an example would enlighten the minds and raise the consciousnesses even of the landlords, to say nothing of the peasants the True Levelers dispossessed of the Commons for the common good.  This would be through a change in heart that would somehow transform essential human nature and usher in a New Age guided by the Holy Spirit and led by Jesus Christ.  After describing the Diggers as essentially simple-minded folk, Sabine commented,

Winstanley’s communism grew directly from his religious experience, but his religion was so free from dogmatism and clericalism that his political and social thought was often quite secular.  His ethics, unlike that which attached to Calvinism, made brotherly love rather than individual self-sufficiency the central principle of democracy. (Ibid., 495.)