While the most frequent justification given for the explosion of violence accompanying the protests over the murder of George Floyd is a concern for racial justice, it is difficult for some of us to understand what looting and destroying black- (and white- and yellow- and green- and purple- and . . . ) owned businesses, burning churches, desecrating memorials, etc., etc., etc., has to do with racial justice, or anything else except rage.

It may just be the way the media are reporting events, but there does seem to be a special animus directed at bookstores, churches, and monuments.  In one ironic incident, the manager of a religious bookstore in Chicago run by the Daughters of Saint Paul, a Catholic religious order, tweeted that their store was looted, and she was wondering what the reaction of the looters would be when they got home and realized that all they had was “a handful of religious books.”  Even more ironically, there are possibly hundreds of small Catholic foundations dedicated to giving people free religious books, thousands of them if you include Protestant and non-Christian organizations. . . .

Going from the ironic to the baffling or disgusting (it’s difficult to pick the right word), a number of monuments that in a less hysterical society would be venerated as symbols of the struggle to achieve racial justice have been vandalized.  In Washington, DC, the World War II Memorial was vandalized.  The Second World War was fought against Nazi Germany and Imperial Japan, both of which parties in power that had as fundamental doctrines the racial inferiority of non Aryans and non-Japanese, respectively.

Even more bizarrely, also in Washington, DC, the Lincoln Memorial was vandalized.  It is true that there has been an effort over a number of decades to diminish, trivialize, or deny the achievements of Abraham Lincoln.  It is, however, difficult to understand the vandalism of a memorial to the struggle to achieve racial justice.

Setting aside the surreal situation that monuments to racial equality are being vandalized in the name of racial equality, what could be done to correct the underlying injustice of the system?

How about opening up equal economic opportunity and means for everyone, regardless of race or anything else, such as with the Capital Homesteading proposal of the Center for Economic and Social Justice (CESJ)? 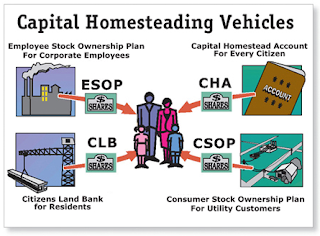 Most simply put, the “Capital Homestead Act” is a comprehensive legislative program of tax, monetary, and fiscal reforms for promoting sustainable economic growth while creating equal opportunity and access for every citizen to become a shareholder in the technological frontier. It is designed to connect every person to the global economy as a fully empowered participant and owner of productive wealth, by dismantling structural barriers in our basic institutions and by financing capital formation through ownership democratization vehicles.

This economic agenda for the 21st Century provides a blueprint for leaders committed to restructuring the legal and financial system to grow the economy at maximum rates with no inflation, in ways that build a Just Third Way version of economic democracy as the essential foundation for effective political democracy.

Capital Homesteading for every citizen offers a private property and free market-oriented alternative for saving the Social Security System as a national retirement income security plan.  But, at the same time, the Capital Homestead Act offers a new national policy to foster life-long  “capital self-sufficiency” as a means to achieve true economic independence for all Americans. If implemented, capital ownership would be systematically de-concentrated and made directly accessible to every person, without reducing property rights of the wealthy.

It's at least worth considering . . . and is certainly more beneficial in the long-run (and short run) than desecrating memorials or robbing nuns of books.