The Triumph of the Will

If history has shown us anything, it is that Woodrow Wilson was the wrong man in the wrong place at the wrong time.  At a time when the United States needed a new direction to restore and retain government “of the people, by the people, and for the people,” it got an elitist snob with a vision limited by his own ego.  When the world needed the U.S. to take the lead and douse the flames that led to World War I, Wilson retreated into isolationism until the situation he helped create got so bad it could no longer be ignored.


One of the problems is that there is such a thick patina of reverence coating the reputation and presidency of Woodrow Wilson that it is extraordinarily difficult to appreciate just how great a disaster his election was for the United States. Part of this was due to Wilson’s character. The rest was the result of his philosophy of government.
Whether Wilson’s character formed his philosophy, or his philosophy formed his character, however, is a question we are not prepared to address. Nor has it any real relevance to this study. Our concern is the effect that Wilson’s character and philosophy had on the office of the president and on the United States.
Governor of New Jersey
Wilson was a man consumed by ambition. After nearly destroying Princeton University by trying to centralize all power in himself as president, he managed to turn his campaign for governor of New Jersey completely around by the simple expedient of “[going] over completely to the reform program that progressives of both parties had been pressing for a decade.” (Link, Woodrow Wilson and the Progressive Era, op. cit., 10.)
This was not out of conviction. It was simply the easiest and quickest way to gain power. Fortunately for the state of New Jersey (and unfortunately for the United States), Wilson spent most of his time as governor running for president.
Wilson’s treatment of his private secretary, Joseph Patrick Tumulty (1879-1954), “his chief aide and advisor during the gubernatorial battles” (ibid., 31) and the man most responsible for Wilson’s election as governor, was completely in character. After his election as president, Wilson kept him on as advisor.
As part of his program to disassemble the civil service reforms instituted by the Republicans, Wilson rewarded Tumulty with determining political patronage policies in the Northeast.  While never popular with the rest of the inner circle, Tumulty was fiercely loyal and gave frequent advice (some of it actually good), which Wilson followed whenever he had already decided to go that way.
At the beginning of Wilson’s second term in 1916, Edith White Bolling Galt Wilson (1872-1961), Wilson’s second wife, and Edward Mandell House (1858-1938) persuaded Wilson to get rid of Tumulty. Tumulty pleaded with Wilson to remain as Wilson’s secretary, and was allowed to stay, but was thereafter marginalized.
Wilson’s Racism
Wilson’s treatment of Tumulty was nothing to his betrayal of the black Americans who had supported him during the presidential campaign. Wilson had actively sought the endorsement of such leaders as Oswald Garrison Villard (1872-1949), William Edward Burghardt Du Bois (1868-1963), and William Monroe Trotter (1872-1934).
Soon after Wilson’s inauguration, Villard, one of the founders of the National Association for the Advancement of Colored People (NAACP), approached Wilson with a proposal to establish a commission to study race relations in the United States. Villard reported that Wilson appeared “wholly sympathetic” to the idea. Villard went to Europe, fully expecting that Wilson would appoint a commission when Villard returned stateside in July 1913.
Wilson not only refused to appoint a commission, he refused to see Villard, although Villard made several attempts to do so. When Villard made a personal appeal to the president, Wilson finally responded that the political situation was too “delicate” for him to consider any such move — meaning that Wilson was afraid he would lose the support of the increasingly reactionary southern elements in Congress, enjoying their first real power since the Civil War.
Wilson’s actions are not free of the suspicion that they may have been taken in revenge for black support of Roosevelt, whose stand on race relations was considered radical, even revolutionary, by many.  As early as 1886 in his campaign for mayor of New York City, Roosevelt had gone out of his way to court the “black vote.”  He noted on more than one occasion that he was always pleased to speak before a crowd of blacks because he knew he was talking to “good Republicans.”  As president, Roosevelt shocked many people (and, oddly, pleased some key Southerners!) by having Dr. Booker T. Washington to dinner at the White House.
Wilson favored segregation. His biographers and admirers gloss over Wilson’s racism by claiming that he prevented the reactionaries from implementing some of their “cruder demands.” The fact remains, however, that he permitted the implementation of segregation in the federal service as official policy.
Formal Jim Crow replaced the unofficial segregation that Republican administrations had been trying, with varying degrees of success, to bring to an end. Workers who objected were fired.
Black Americans had gradually been evolving socially and politically from non-persons to what was admittedly less than first class citizenship. Under Wilson, however, black Americans were cemented into second class status.
The Collector of Internal Revenue in Georgia summed up the administration’s policy succinctly: “There are no Government positions for Negroes in the South. A Negro’s place is in the cornfield.” The attitude of the entire country seemed changed. Government appeared to have turned into a force for imposing predetermined social change and eliminating opportunity, that is, transformed from a servant into the master.
Birth of a Nation 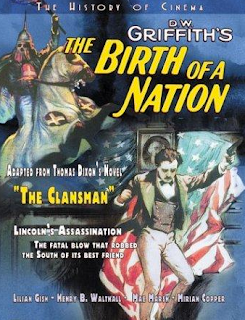 Nowhere was this more evident than in the growing public expression of attitudes about race. Many had, admittedly, held such views privately, and they had continued to simmer under the surface. They had, however, been considered anti-American as well as in poor taste, especially with the Civil War still in living memory.
This was now changed. Faith in discredited racial theories replaced reason based on America’s founding principles. A case in point, many critics consider D.W. Griffith’s dramatization of the overtly racist but bestselling novel by Thomas Dixon Jr. (1864-1946), The Clansman: An Historical Romance of the Ku Klux Klan (1905) as Griffith’s best (or, at least, best known) film, Birth of a Nation (1915).
A title card in the film attributes a quote to Wilson: “The white men were roused by a mere instinct of self-preservation . . . . . until at last there had sprung into existence a great Ku Klux Klan, a veritable empire of the South, to protect the Southern country. — Woodrow Wilson.” It is alleged that when Wilson attended a special screening of the film at the White House on March 21, 1915, he said, “It is like writing history with lightning, and my only regret is that it is all so terribly true.” — This quote has not been authenticated, but many authorities accept it as true.  (Some sources give February 18, 1915 as the date and claim that Wilson showed it regularly to Congressional audiences to gain support for instituting official segregation.) 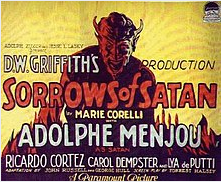 Allegedly in an effort to make amends for Birth of a Nation, which many people found offensive, Griffith filmed Intolerance: Love’s Struggle Throughout the Ages (1916). While considered a cinematic masterpiece, the film never attained the popularity of Birth of a Nation. The racial philosophy of the film is also found in Madame Blavatsky’s Theosophy, echoes of which appear as well in other Griffith films, e.g. his dramatization of The Sorrows of Satan (1926) from the novel by the bizarre “Marie Corelli” (not her real name).
That same year in England John Maynard Keynes published an early formulation of his elitist economic theories. The next year in America, Monsignor John A. Ryan published the book he considered his masterpiece: Distributive Justice, a blueprint for expansion of State power and control of the economy ostensibly based on Catholic social teaching as presented by Leo XIII in Rerum Novarum . . . which called for limiting the role of the State.
#30#
Posted by Michael D. Greaney at 6:00 AM