At first glance, there might seem to be no connection between science fiction and fantasy “fandom” and the Just Third Way.  Yes, the ideas of the Just Third Way are forward-looking, futuristic, and could easily be integrated into visions of future, fantastic, or alternative societies and worlds.  They might even form the core around which science fiction and fantasy epics could be written — Tolkien may have to look to his laurels in the face of the new wave of Just Third Way writers! 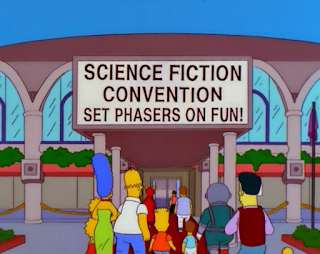 But fandom?  That’s just for people wanting to have a little fun and meet with like-minded others, discuss subjects that bore one’s spouse, children, significant other, or (especially) co-workers and associates to tears, and meet and greet the writers, actors, and others who have given us so much pleasure . . . right?
Wrong.  Maybe that’s what fandom means to most people, but there are some to whom it is deadly serious business.  It’s not entertainment or recreation, it’s how they make their living and even seek to remake society into their own image and likeness . . . and that “image and likeness” seems to have been taken over by individuals and groups vaguely described as “liberal,” to the detriment of those even more loosely labeled “conservative.”
This came up because a number of science fiction and fantasy writers have been under “attack” for being “too conservative.”  The beauty of the Just Third Way, of course, is that the terms “liberal” and “conservative” are not really applicable.  What matters are sound principles and results, not personalities.  We have, for example, people who are “Pro-Trump” and others who are, uh, not Pro-Trump, but (except for some exciting discussions) we all work together towards a common goal, something everyone needs to think about.
The situation has been coming to a boil for a while now.  Briefly (but hopefully accurately) — for our readers for the most part don’t give any part of a rat’s anatomy about squabbles in science fiction and fantasy fandom — a group of “conservative” science fiction and fantasy writers alleged a few years ago that awards seemed to be going almost exclusively to writers and others of a more “liberal” persuasion.
For example, Larry Correia, a New York Times bestselling writer whose “Monster Hunters” books are, uh, bestsellers (and whose fictional characterization of R. Buckminster Fuller in another series is hilariously spot-on), seems to vanish mysteriously when it comes to handing out awards . . . sort of like the hundreds of thousands of participants in the annual March for Life suddenly drop off the radar when they reach Washington, D.C.  Briefly reviewing his online material, Larry comes across as a “conservative” politically, fiscally, and (gasp) religiously, which — so it has been alleged — explains why this six-foot-plus, gun-totin’, CPA (got our vote right there), NYT bestseller (did we mention he has made the New York Times bestseller list?) becomes something of a de facto literary wallflower when the gods of fandom convene.
Sidebar: If you don’t like horror-comedy-fantasy-action epics that don’t stint on word length and are actually entertaining, you will absolutely hate Correia’s “Monster Hunter” books.  (Admittedly, we almost didn’t buy the first one because we generally dislike horror . . . but this is pretty unhorrible horror.)
There has also been something of a stink about The Last Closet, an exposé written by Moira Greyland Peat, daughter of noted author Marion Zimmer Bradley and numismatist and writer Walter Breen.  Peat’s book chronicles a sickening record of abuse pervading parts of the science fiction and fantasy community.  You may want to avoid reading it unless you have a strong stomach.  We mean that.  It is not for the faint-hearted or easily nauseated.
Anyway, in protest a number of “conservatives” organized the “Sad Puppies” and the “Rabid Puppies” campaigns, the history of which we will not relate, nor explain, even if we could.  It gets a bit far afield from the point we’re working our way around to making.
Which is?
Recently, a fairly new science fiction writer named Jon Del Arroz said he wanted to wear a “bodycam” to “Worldcon,” a science fiction and fantasy convention.  Instead of simply saying “No, but you’re welcome to come without it,” the convention organizers forbade him even to attend.  Del Arroz also applied for membership in the Science Fiction and Fantasy Writers of America (SFWA), a professional association, and was denied on what seem to the uninitiated to be somewhat specious grounds.

Del Arroz, by the way, is the author of For Steam and Country, a “Young Adult” (YA) novel in the “steampunk” genre.  (And what is “steampunk,” you ask?  Think the old Wild Wild West television show, or Jules Verne after too many nips at the absinthe bottle.)
Now for the social justice tie-in.  The situation seems ready-made to apply the techniques of social justice as outlined in CESJ co-founder Father William Ferree’s Introduction to Social Justice.  There is allegedly a systematic injustice against a group of people, and what appear to be a number of flawed institutions.
Specifically, people claim to have been denied access to institutions in which they otherwise qualify to participate, apparently solely on the basis of their opinions.  This would be particularly ironic in the case of science fiction and fantasy, for these are the literary genres that are supposed to be open to all ideas, some of which, e.g., traditional religious values, Aristotelian-Thomist philosophy, and non-socialist political economy, may actually be offensive to some individuals or groups.
What we may be seeing is a phenomenon Msgr. Ronald Knox described rather wittily in his 1950 work, Enthusiasm.  Be careful to note that by “born again” Knox did not mean what is usually meant these days in many Christian circles.  Rather, he referred to someone who has lifted him- or herself above the common herd by raising his or her consciousness.  As Knox explained in this admittedly lengthy work,
To be born again [i.e., have your consciousness raised] makes you a new creature; the seed of grace, ransomed from a drowning world, must not be confused with the unregenerate; they are (so to say) a different kind of animal. They alone, and not the ungodly, have legal rights.  (Msgr. Ronald Knox, Enthusiasm: A Chapter in the History of Religion, With Special Reference to the Seventeenth and Eighteenth Centuries.  New York: Oxford University Press, 1961, 584.)
Knox concluded with examples of the “godly” or “enlightened” putting themselves above the law and denying its protection to others.  The basic idea is that what is forbidden to ordinary, unenlightened people (such as “conservatives”) is perfectly proper, sometimes even mandatory, for those who have ascended to a higher plane (such as “liberals”).
Knox alluded to this apparent inconsistency a number of times in his book, e.g., to understand why pacifist Quakers suffered no qualms of conscience serving in the army of Oliver Cromwell (1599-1658) during the various phases of the English Civil War (1642-1646, 1648-1649, 1649-1651).  As he explained,
But perhaps the inconsistency is not so grave as it appears, if we study the Anabaptist background of the Quaker movement.  We saw in the last chapter that the Anabaptists did not really hold modern views about non-resistance.  Their doctrine was, not that nobody has a right to take the sword, but that no worldly person has a right to take the sword.  Dominion is founded on grace; if you are not in a state of grace you have, strictly speaking, no rights, and therefore no authority either to government or to make war — least of all on the saints.  But what if the saints contrive to set up the theocratic kingdom which is, always, the subject of their dreams?  Is it so clear that they have no right to enforce their own superior enlightenment on the world?  The Peasants’ Revolt and the defence of Munster give the answer to your question. (Ibid., 148.)
Translation?  If you have become inherently better than others, i.e., “godly” to others’ “ungodly” (which doesn’t necessarily have anything to do with religion or even a God or gods), what is forbidden for the unenlightened is not only permissible but encouraged, even mandatory for the enlightened.
So, what should Del Arroz and the others who believe they have been treated unjustly do?  So far, just what they have been doing: educating others regarding the situation.  Is that, however, enough?
By no means.  The next step is to organize, focusing especially on gaining allies within (for example) the SFWA.  Why?  Because effective — and just — reform of flawed institutions can only be achieved by those inside the institution.  Outsiders can (and often must) play a key role, but if those within the institution do not go along with the program, the reform effort will almost inevitably end up being a complete waste of time and resources.
This is where reading the above-noted Fr. Ferree’s Introduction to Social Justice (available as a free download from the CESJ website) would be most useful, as would looking over the CESJ website, and giving Dr. Norman Kurland, president of CESJ, a call (contact info on the website) if it looks as if a viable effort to reform science fiction and fantasy fandom might get off the ground.  Norm has been involved in “revolutionary” reform efforts ranging from the civil rights movement in the 1960s, to persuading key legislators to champion the initial enabling legislation for Employee Stock Ownership Plans (ESOPs).  A little thing like reforming science fiction and fantasy fandom wouldn’t faze him a bit.
#30#
Posted by Michael D. Greaney at 6:00 AM