Today we have a posting that we hope will get you to look a little differently at the Annual March for Life, scheduled for Friday, January 19, 2018.  You know . . . the annual event in which a gazillion people descend on Washington, DC, and the media wave a magic wand and they all disappear. . . .


Sarcasm (however well-deserved and accurate) aside, the fact is that the March for Life might need to expand its vision a little — not only to become more effective, but to tweak the media a bit for ignoring an important story right under their very noses.  Right now the mavens and moguls of the media can, with some justification (although not much) claim that, since the March for Life never says anything new, it is “old news,” and therefore of no interest to their audience.
Yes, that’s like saying abolitionist protests against chattel slavery and civil rights demonstrations are not newsworthy because it’s all been done before, but there is a point there.  If so many decades of activity show no gains, isn’t it time at least to consider what else could be done?
Now, reread that last paragraph carefully, especially if your feathers started ruffling up.  We said, “consider what else could be done” in the sense of “what more can we do in addition to what we’re doing,” not “what can we do instead of what we’re doing.”
In our opinion, what is needed is a pro-life economic agenda, one that respects the dignity of the human person economically, as the rights to life and liberty respect the dignity of the human person socially and politically.  And that means widespread ownership of capital as well as of labor — one’s own labor, that is.  We frown on that whole slavery thing. 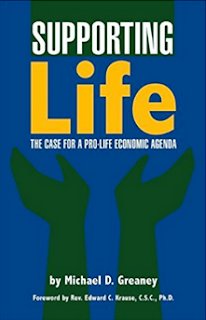 Anyway, a few years back we put together a pamphlet outlining the case for a pro-life economic agenda.  Not presenting the agenda, of course.  That would require several volumes.  Just making the case as to why a pro-life economic agenda is needed.  First appearing as a series of blog postings much like this one (except without pictures), we later put it out as a rather cleverly titled booklet, Supporting Life: The Case for a Pro-Life Economic Agenda.
Recently, in anticipation of the March for Life, we posted a link to the pamphlet in a number of groups on FaceBook dedicated to such things as economics, distributism, and the Catholic Worker movement.  Our position is that if you take away the economic rationalizations for abortion, you will do a great deal toward transforming today’s culture of death into a culture of life.  As the clincher, we quoted Blessed Mother Teresa of Calcutta, “It is a poverty to decide that a child must die so that you live as you wish.”
At least, we thought it was a clincher.  To be blunt, we were more than a little surprised when someone in one of the Catholic Worker groups posted a series of rather “acerbic” comments phrased in less than pastoral language demanding to know what economics had to do with being pro-life, that being against abortion and mandatory organ donation (no, don’t raise the issue of “mandatory donation”) is hypocritical because a woman owns her own body and thus the baby because it’s dependent on her, and we are only posting in order to peddle books.
Let’s take the comments in reverse order.  First, no, trust us.  We aren’t posting in FaceBook only to sell books.  There are, frankly, much easier and less time-consuming ways to do that than arguing one on one with someone who isn’t interested in buying your book anyway and says so right at the start.  We can assure you that the dollar or so profit we might realize does not compensate us for the hours of . . . we’ll call it “discussion.”
A woman owns her own body?  Well, yes.  So does a man.  And so does a baby. . . .
The rant we got in response was how being against the State coming and chopping out one of our kidneys because someone else will die without it (the example given) is hypocritical because by asserting “absolute sovereignty of a woman over her own body” (we never said either “absolute” or “sovereignty,” but “ownership”) should also mean the right to kill a baby in utero because it is completely dependent on its mother to live.  Something wrong with that argument:
Consistent with the first principle of reason, a human being is a human being from the moment of conception. The dependency argument is invalid, given that infants and many adults are also dependent on others for life — which is consistent with nature as defined in Aristotelian-Thomist philosophy, that “man is by nature a political animal.”
The idea that external circumstances can change objective facts (situational ethics) transformed jurisprudence in this country beginning with Scott v. Sandford (1857), which claimed that no human being of African birth or descent could ever be a person as that term is used in the Constitution: Taney conflated the terms “person” and “citizen,” claiming they were equivalent, which they are not, and made his case on a logical fallacy of equivocation.
The Fourteenth Amendment was intended in part to overturn Scott, but the Supreme Court didn’t like to give up its new power to create law, and took the first opportunity to reassert itself. This came with the Slaughterhouse Cases of 1873, which effectively nullified the Fourteenth Amendment, asserting that rights come from the State, rather than being inherent in each human being. The State, therefore, creates persons, persons do not create the State, which effectively puts the State in the place of God (cf. Hobbes’s “Mortall God” of the State).
Exactly 100 years later the U.S. Supreme Court used the theory of the sovereignty of the collective over human beings (i.e., that the state created by human beings is greater than human beings created by God) to render the opinion in Roe v. Wade.
Now, what does an economic agenda for the pro-life movement have to do with the pro-life movement or the Catholic Worker movement?  We did find it a little odd that anyone would even have to ask that question, but here goes:
Dorothy Day had an abortion, for which she never forgave herself, however much she may have been forgiven. She never forgot that she had killed an innocent human being for what amounted to her own convenience
Some psychologists might be tempted to maintain, probably with some justice, that Day’s “exaggerated” concern for “God’s little ones” — the poor — was a personal act of reparation for the sin of murder. Her intransigence against the rich for their indifference or even hostility to the poor would be in this analysis a projection of, and reparation for, her own guilt.
No connection?  In our opinion, there is the strongest possible connection.
#30#
Posted by Michael D. Greaney at 6:00 AM