How will the economic realities of the 21st Century shape the way companies train and develop their workforces?

The nature of production, work and how most people earn their living have changed dramatically. Labor-replacing technologies (including robotics, advanced information systems and artificial intelligence), and global competition driven by an unrelenting push for short-term quarterly gains, have forever transformed local, national and the global economies.

Virtually entire industries have moved offshore seeking lower-cost labor. Many companies that have remained in the U.S. have shifted to reliance on contingent workers, outsourcing, and automation. Many of the first-rung jobs on the career ladder have simply disappeared. Job security has become an anachronism, a story told by the elders of earlier days. And retirement income? That’s another major challenge most working people have yet to face.

The root of this economic dilemma is that owners of labor are being displaced by technology . . . and they don’t own and receive the profits produced by the technology that is displacing them.  Yes, there is a serious problem with “job flight” to lower cost wage systems.  If ordinary workers owned the technology, however, and didn’t have to rely on labor alone for income, labor costs could be kept to a minimum.  As labor statesman Walter Reuther pointed out so long ago, if income comes from bottom-line profits instead of increasing the costs of production, workers will have more income, and prices will stay low and competitive in global trade.
Good jobs with decent pay are getting harder to find, particularly for millennials entering the workforce, even with advanced degrees.  But occasionally a “good news” story appears featuring workers gaining a leg-up in a firm that does well by its people. 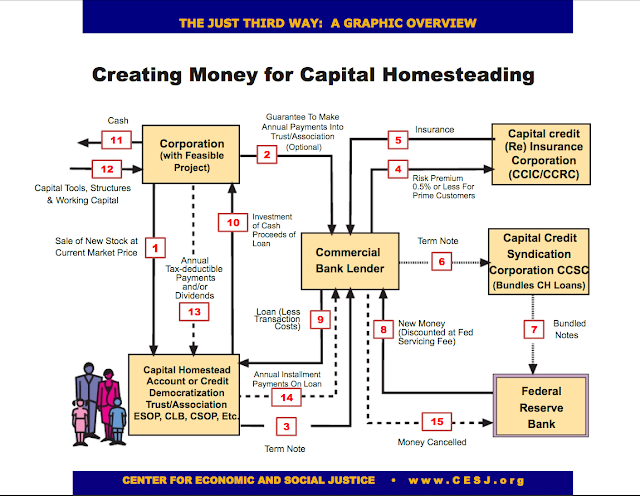 For a complete graphic overview of the Just Third Way and a larger image, click here.
For more information, visit the website, www.cesj.org, or email thirdway [at] cesj [dot] org.

From the Wage System to the Ownership System
Across the country, in all sectors and in significant numbers, are workplaces that respect the dignity of workers and maintain the efficacy of work. Not only do they offer decent wages and retirement income, but they extend pathways for dramatic earnings gains and career advancement through shared ownership opportunities.

What’s more, these worker-owned firms demonstrate proven success, often outperforming their peers, because of (not despite) their commitment to workers. According to the National Center for Employee Ownership in Oakland, California, companies that share ownership through Employee Stock Ownership Plans or ESOPs, regularly share profits, and practice participatory management and governance, are 150% more profitable than otherwise comparable firms.
These firms have put in place practical solutions that simultaneously bolster the company’s competitiveness and profitability, economically empower workers, and strengthen long-term economic prospects for the whole community. Such organizations have already found some answers to 21st Century challenges.
Worker ownership is good, but it may not be enough.  Even a worker-owned company needs “structures of justice” within the company and its operations.
One essential structure of justice relates to how a company’s growth is financed. Where the money comes from for expansion will determine who has future ownership and control in the company.
Model ESOP companies are normally financed by private sector lenders through loans that meet the company’s needs for productive capital assets. Such loans under Federal ESOP laws are repaid entirely with future pretax profits (i.e., “future savings”). This allows every worker to earn shares through a tax-sheltered ESOP trust without reducing their savings, wages, salaries or bonuses. No one puts up his or her own money to acquire shares on capital credit repayable from each year’s profits of the company.
ESOPs can, therefore, be designed to allocate each year an equal number of shares that have been paid for to every full-time worker, from the top executive to the janitor, despite their differences in salaries, wages and bonuses. 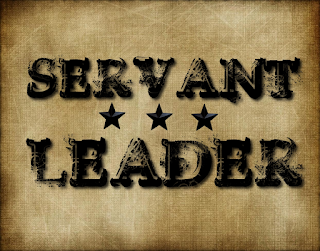 Democratizing and equalizing future ownership opportunities as a fundamental human right of every worker will promote a more democratic and participatory “servant leadership” culture and governance system within the company. True “servant leaders” know (or learn) how to help educate and effectively empower every member of the team to serve others and together provide the greatest possible value to their customers. Servant leaders must themselves be committed to constantly improving the “ownership culture” for all present and future worker-owners in the company.
That presents a new challenge for today’s leaders.  Clearly a work environment in which everyone is a co-owner is very different from the typical one in which those shareholders who hold the controlling shares appoint members of the board of directors, and the board hires management to keep the workers in line for the “benefit” of the controlling shareholders. The board then has the power to violate the historically recognized private property (ownership) rights of owners by not paying out profits — withholding “the fruits of ownership” to which minority shareholders are entitled. Keeping profits within the company (under the rationalization of “retained earnings”) further concentrates ownership powers of the controlling shareholders and the managers they select. The only ones who win in such a “typical” business situation are the majority owners and the top managers they control. 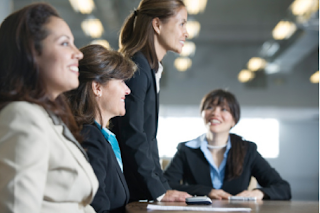 When the workers share in the risks, rewards, rights and responsibilities of ownership, the work environment changes profoundly. Management and board members must act like true servant leaders, who can lead, teach and coach, not just boss workers around.  The board and management must respect the dignity of workers in ways that benefit all those with a stake in the company’s success, including customers, vendors, and the community.
All the things people now look for in traditional jobs — and much more — can be achieved through a sound, justice-based program whereby workers become owners of the company and are not simply manipulated to “think like owners“ merely to create profits for others. That requires a new type of leader who inspires, teaches, guides and empowers others as partners and respected members of a team.
#30#
Posted by Michael D. Greaney at 2:45 PM