Philosophies at War, I: The Meaning and Purpose of Life

In 1943 at the height of the Second World War, the late Fulton J. Sheen published a book giving his perspective on what the conflict was really about, Philosophies at War.  A follow-up of sorts to such earlier works as Religion Without God (1928), and Freedom Under God (1940), the book is not very well known, and is very rare.
Recently we had the opportunity to obtain a (relatively) inexpensive copy.  On reading it, we think we understand just why the book is not better known.  It goes directly contrary to the philosophy that today pervades organized religion (“Church”), government (“State”), and even the family.  As Sheen summed up the situation,
It is simply impossible to have millions of men in the world living according to their pagan principles, and not produce the modern chaotic world in which we live. This idea of a “Heaven here below” is the surest way to make a hell upon earth. The universe thus becomes a multiplicity of self-centered little deities; the coat of arms of each is a big letter “I,” and when they talk their “I”’s are always getting closer together.
In the light of the foregoing explanation of man the choice before the world is this: Will we build a New Order on the totalitarian assumption that man is a tool of the State? Or will we retain the Old Order of the secularist culture of the last two hundred years, that man is only an economic animal? Or will we build a New Order on the Christian assumption, that man is a creature made to the image and likeness of God and therefore one for whom economics, politics, and society exist as a means to an eternal destiny beyond the historical perspective of planets, space, and time? (Fulton J. Sheen, Philosophies at War.  New York: Charles Scribner’s Sons, 1943, 94-95.)
As Sheen saw it, the great struggle was not the economic conflict between capitalism and socialism, but between competing philosophies.  These are the one in which man, whether collective or individual, is the be-all and end-all of creation and the whole meaning of life, and the other in which God is the center. 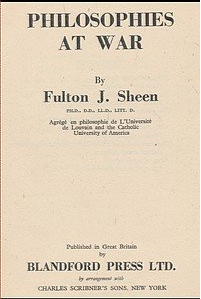 Ultimately — according to Sheen — there is no difference between individualism and collectivism, or between their economic applications, capitalism and socialism, respectively.  When ordinary people lack property, and therefore power, even (or especially) laissez faire capitalism devolves into socialism and completes the evolution of the State into the Hobbesian “Mortall God.”  As he explained,
Given the errant impulses, the frustrated selfish existences, the distorted human goals which these partial views of man engender, there is only one way to arrest that chaos, and that is by organizing it, and the organization of chaos is Socialism. The individualism and egotism which a distorted concept of man begets leave him alone and isolated, and to overcome this isolation there is only one non-Christian solution possible: the subordination of these rebellious atoms to a compulsory principle in the hands of the State. Socialism is the secularized, atheized version of a community and a fraternity of man which Christian love alone can engender. It is the new form into which man will bring his tortured and isolated personality, in vain quest for peace. By abusing his freedom under Liberalism, man, unless he returns to a knowledge of his true nature, will fall under the compulsion of Socialism. He will think less and less of freedom, though he may talk much about it, for a man talks about his health when he is unhealthy. His end will be the trading of his freedom for a false security from the wet-nurse of the State.  (Ibid., 96-97.)
This, of course, is no more than what Sheen had been saying all along, ever since the publication of his doctoral thesis, God and Intelligence in Modern Philosophy (1925).  Modern man, by attempting to create heaven on earth, has succeeded only in creating a living hell. 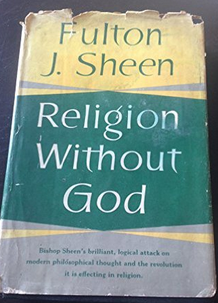 And why?  Because by thinking that this life, “man,” is the be-all and end-all, Collective Man is put in the place of God, and God relegated to a supporting role.  Each person then creates his or her own God, enabling each person to condemn all others for any disagreement with the clincher, “My God wouldn’t do that.”  Of course He or She “wouldn’t do that” . . . because the speaker is to all intents and purposes God, ruling over His or Her personal heaven — which turns into everyone else’s hell.
But is the creation of a personal or collective heaven the meaning and purpose of life?
Sheen — and the Center for Economic and Social Justice (CESJ) — would say, “No.”  While Sheen, a Catholic priest, necessarily expressed himself in Christian terms, the point is equally valid for everyone on earth — and the universal appeal of what he said explains Sheen’s immense popularity among people of other faiths.
To any Aristotelian, whether of the school of Aquinas (Christian), Maimonides (Jewish), or Ibn Khaldûn (Muslim) — or even pagan, as Aristotle himself was — the meaning and purpose of life is to become more fully human.  All things aim at the good, said Aristotle in The Nichomachean Ethics.  And what is “good”?  To conform yourself to your own nature by acquiring and developing virtue, “human-ness.”
And how do you know something is “good”?  By applying “the force and light of human reason” to the question.  All Aristotelians of whatever faith — or none — agree that knowledge of God’s existence and of the natural law “written in the hearts of all men” (and of course we include women and children as “men” which in this context signifies “member of the human race”) can be known by natural reason.
So why doesn’t everybody agree about God’s existence and on the content of the natural law?  Because human beings are imperfect, and human reason is therefore necessarily imperfect.  “Only God is good” . . . but people have different ideas of what is God, and therefore different ideas of what is good — and it goes the other way, too.
Some people, as Aristotle explained, have the wrong idea of good, and therefore do evil — a wrong idea of good leads to a wrong idea of God.  Others have a different view of good colored by their personal faith, that is, a different idea of God leads to a different idea of good.  Some simply reject reason as valid and go with faith alone, ultimately basing their belief system on their own personal subjective will and opinion rather than objective reason and knowledge: what is good for the “I”, Kallikles the Sophist’s idea that “might makes right.”
Philosophically speaking, Sheen had little or no problem with people who had wrong ideas about good, or whose concept of good was influenced by a personal belief system.  Such people can be reasoned with, and common ground established.  The way to deal with someone with the wrong idea about good is to explain the right idea about good.  The way to deal with someone with a different set of beliefs based on the supernatural virtues of faith, hope, and charity is to find agreement on natural virtues of prudence, temperance, fortitude, and justice.
The problem is with people who reject reason and try to base everything on faith, hope, and charity — which usually means one’s personal faith, which thereby becomes self-justifying (a circular argument).  As Sheen pointed out, a great deal of trouble in the world comes from people mixing the natural and the supernatural in some very unnatural ways.
#30#
Posted by Michael D. Greaney at 6:00 AM