Philosophies at War, IV: The Double Mind of Man

To summarize what we’ve discussed so far in this series, the world is in crisis, and it’s worse than anything Fulton Sheen imagined when he wrote Philosophies at War in 1943.  Then, Sheen could look to the Catholic Church to provide an integrated body of social thought to counter the distortions of capitalism and the insidious lunacy of socialism.
This is because the Catholic Church’s social thought — in common with its religious thought — is based solidly on the rock of common sense, that is, of reason.  To combat the rise of the “new things” that were wreaking havoc in both religious society (“Church”) and civil society (“State”) — and, today, domestic society (Family) as well, the Fathers of the First Vatican Council defined the twin doctrines of the infallibility of the teaching office of the pope, and that reason is the foundation of faith.
That is, knowledge of God’s existence and of the natural law written in the hearts of all human beings can be known by the force and light of human reason alone.  It’s in Chapter 4.2 and Canon 2.1, if you’re curious.  It was reiterated in the Oath Against Modernism and Humani Generis, Pope Pius XII’s encyclical “Concerning Some False Opinions Threatening to Undermine the Foundations of Catholic Doctrine” . . . of which the denial of reason as the foundation of faith is listed first, in § 2.
Thus (at least in Catholic teaching), faith, morals, and reason must all be in agreement.  You can’t, as G.K. Chesterton described the efforts of the sophist Siger of Brabant, split the human head in two, and declare that —
. . . [t]here are two truths; the truth of the supernatural world, and the truth of the natural world, which contradicts the supernatural world.  While we are being naturalists, we can suppose that Christianity is all nonsense; but then, when we remember that we are Christians, we must admit that Christianity is true even if it is nonsense.  In other words, Siger of Brabant split the human head in two, like the blow in an old legend of battle; and declared that a man has two minds, with one of which he must entirely believe and with the other may utterly disbelieve.  (G.K. Chesterton, Saint Thomas Aquinas: The “Dumb Ox”.  New York: Image Books, 1956, 92-93.
These days, we see this “double mind of man” in the presumed conflict between capitalism and socialism, especially the “Christian” varieties of both.  The Christian capitalist bases his system on his limited understanding of the natural world (i.e., that natural rights, while nominally held by all, can only be exercised by a special few), and tries to operate in temporal affairs in accordance with what he believes are the inexorable Laws of Economics . . . which he understands about as well as he does the natural law, which is to say, not at all.
When things become unbearable, however, the Christian capitalist finds he must shift gears, as it were, and get from the presumed natural highway of his mind, to the supernatural detour into otherworldliness — hopefully on a temporary basis.  He shifts from what he thinks is justice, to what he thinks is charity, all the while never realizing that this bifurcation of thought is not only completely unnecessary, it has disastrous consequences.  Charity is not true only as a temporary thing.  It is either true all the time, or not at all.
This is because charity does not replace justice, even temporarily.  Instead, charity fulfills and completes justice — permanently.  The two necessarily go together and cannot be separated, any more than power and property can be disconnected for any length of time.
Yet, if the Christian capitalist is inconsistent by separating justice and charity, the Christian socialist is completely irrational.  Where the Christian capitalist admits a role, albeit hopefully temporary, for what he thinks is charity, the Christian socialist rejects a distorted concept of justice altogether and replaces it permanently with a perverted idea of charity. 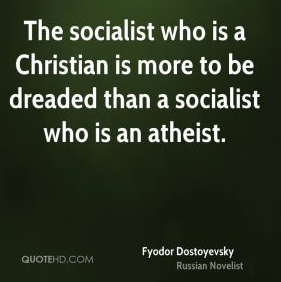 The Christian socialist (although many who are such tend to deny it) sees the disaster called capitalism and realizes that this must not be.  He sees that justice à la capitalism has failed, and concludes either that it is not really justice, or that charity must take its place.  In the former case, he simply redefines justice in charitable terms, usually some form of redistribution based on need.  In the latter — and more honest — case he simply dismisses justice and claims to base everything on charity; “all you need is love.”
This, however, is just the error of the capitalist all over again, except more extreme and in the opposite direction.  The capitalist tries to work within a system in which justice and charity take turns, so to speak.  Justice is true except when charity becomes necessary, and charity is true until justice can take over again.  Thus, for the capitalist, both charity and justice are true, but justice is more true than charity.  The natural world is what counts for the capitalist; the supernatural is merely an expedient.
The socialist does the capitalist one better by claiming, in effect, that justice is never true, or (at least) has been wrongly defined, and is therefore not true as the capitalist understands it.  Ironically, the socialist is usually correct that the capitalist misunderstands justice.  Unfortunately, he, the socialist, is not therefore correct.  He simply has a different misunderstanding than the capitalist.
The socialist then tosses out the capitalist’s type of justice and replaces it with what he calls justice (or charity; it doesn’t matter which), which in his opinion is always true, even when it’s neither justice nor charity.  Thus, for the socialist, justice is either not true at all, or is true in a different and lesser way than charity, which is always true, even when it is not.    The natural world is also what counts for the socialist; the supernatural is confused with the natural in a way that loses its special character and becomes a perverted version of the natural.
#30#
Posted by Michael D. Greaney at 6:00 AM