Yesterday we noted that, in refusing to stand for the National Anthem of the United States, Colin Rand Kaepernick may have acted in a socially unjust manner.  That is, if he harmed the common good, he broke the first law of social justice.
To understand this, we need to know what the common good is: the vast network of institutions within which people carry out the business of living, principally the exercise of rights in order to acquire and develop virtue, thereby becoming more fully human.
And what is an “institution”?  An institution is a social tool, a “social habit,” that defines a particular way of doing something “instituted” so that, in a particular social setting, individuals and groups act in predictable and expected ways.  In the U.S., people drive on the right side of the street.  They shake hands when they meet.  They stand for the National Anthem.
Now, the first law of social justice (at least as analyzed by CESJ co-founder Father William Ferree) is “That the Common Good Be Kept Inviolate.”  (Rev. William Ferree, S.M., Introduction to Social Justice.  New York: Paulist Press, 1948, 34.)  This comes from § 57 of Quadragesimo Anno.  As Ferree explained,
The first great law . . . is “that the Common Good of all society be kept inviolate.” The meaning of this law is that in all private dealings, in all exercise of individual justice, the Common Good must be a primary object of solicitude. To attack or to endanger the Common Good in order to attain some private end, no matter how good or how necessary this latter may be in its own order, is social injustice and is wrong. The Common Good is not a means for any particular interests; it is not a bargaining point in any private quarrel whatsoever; it is not a pressure that one may legitimately exercise to obtain any private ends. It is a good so great that very frequently private rights — even inviolable private rights — cannot be exercised until it is safeguarded.
Thus, in a time when the Common Good of a whole nation is threatened by military attack, every man in it has an inviolable right to live in his own home with his wife and children — and none of them who are drafted can do it.
Thus, while Kaepernick may have legitimate, even grave and serious grievances against the United States, his method of airing his grievances was socially unjust: he attacked an institution of the common good — standing for the National Anthem — “in order to attain some private end” which, “no matter how good or how necessary this . . . may be in its own order, is social injustice and is wrong.”
Admittedly, in the greater scheme of things, refusing to stand for the National Anthem is, in and of itself, pretty small stuff.  If Kaepernick had been a spectator in the stands, probably no one would have thought twice about it.  Those around him would likely have dismissed his failure to stand as a medical condition, ignorance, or even a failure to register what is going on around him in the real world.
The problem is that Kaepernick was a public figure in a public forum, and his refusal to stand for the National Anthem took on a character beyond that of a private individual.  When King Henry II Plantagenet petulantly exclaimed, “Will no one rid me of this meddlesome priest?” he probably did not even recall saying it a moment later — and he certainly had no idea that four of his knights would take his words as a royal command to go and murder Saint Thomas à Becket.  Public persons have to be very careful of what they say or do in all circumstances, even (or especially) when they think no one is listening or watching. 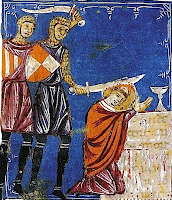 Similarly, Kaepernick’s display of open contempt for the United States — for such it was — could easily be excused or overlooked in a private person . . . but in that context, Kaepernick was far from a private person.  He was a very public person acting in a very public manner, and thereby giving an importance to his actions and words that would be lacking if he were merely a spectator who had paid upwards of $100 to see the game, instead of someone being paid quite a bit more to play in that game.  Others seeing him could easily conclude (as many evidently have) that showing disrespect for the symbols of a nation is a legitimate way of airing grievances, regardless how trivial or great.
There are legitimate means to petition for redress of grievances that Kaepernick did not bother to use before he did what he did.  Had he exhausted those before carrying out his public act of protest, he could at least argue that he was morally in the right (although, given the moral obligation to organize with others under social justice to correct injustices, that is debatable), but should still have been willing to accept appropriate punishment for violating an institution of the common good for his private purposes, not to mention the disrespect he showed the spectators who paid money to see a game, not a political statement.
Yes, Kaepernick absolutely has the liberty to do as he did, but it is that exaggerated form of liberty that is really license.  The proper exercise of liberty someone has absolutely within the common good necessarily implies limits on that exercise, and Kaepernick went beyond those limits.  By doing so, he not only showed disrespect for the United States, but for the common good itself by arrogating it to his personal wants and needs.
#30#
Posted by Michael D. Greaney at 6:00 AM