Distributists almost always have one political economist they detest more than all the rest . . . which is saying a lot.  That is that Mean Ol’ Adam Smith, whose “invisible hand” argument has sometimes been characterized as attempting to substitute for the Hand of God. 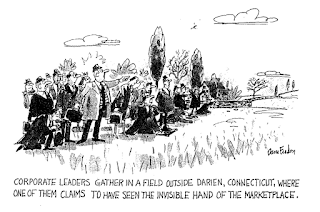 That’s kind of . . . dumb.  The invisible hand is Smith’s metaphor of the economic system with proper internal controls.  If the system is properly designed, it will run almost automatically as if it were guided by an “invisible hand” so that things always work out properly.  The fact that Smith’s system was not properly designed is another matter, and an argument for another day.
Our interest today is Smith’s first principle of economics.  As he put it in The Wealth of Nations, this can be stated quite simply as “Consumption is the sole end and purpose of all production.”
Smith’s first principle leads naturally into Say’s Law of Markets . . . and (as we might expect), Jean-Baptiste Say is probably second on the list of political economists people love to hate.  And yet, like Smith’s invisible hand, Say’s Law is nothing more than common sense.
To explain Say’s Law, all other things being equal, there are only two ways to consume: produce for your own consumption directly with your land, labor, or capital, or to trade to others to be able to consume what they produce with their land labor, or capital.  Thus, what is produced tends to be what people want or need, without stimulating artificial demand for unnecessary or unwanted production produced only for profit: production equals income, and supply generates its own demand, and demand, its own supply.
Ironically, Say best explained the law named after him (he didn’t invent it, but gave it its clearest expression) in refuting the theories of the third political economist on the list of those people love to hate: the Reverend Thomas Malthus.  Under the Malthusian Spell, for over two centuries most experts have concluded that for there to be economic growth, the rate of population growth must be reduced; there are too many people.
Bologna, said Say and a number of others, such as John Weyland, a political economist people would probably love to hate if they knew anything about him.  Weyland’s anti-Malthusian theory irritated more experts than Adam Smith.
Weyland’s theory is that the rate of population growth varies inversely — and naturally — with the standard of living. Thus, as living standards rise, the reproductive rate decreases, and as living standards fall, the reproductive rate increases in response. Confusing cause and effect, however, many authorities following Malthus have assumed that rising standards of living are caused by reducing population growth, not that the rate of population growth is reduced by raising the standard of living.
Under the Banking Principle on which binary economics is based, the amount of money in the system is determined by production — all money comes from production, as it is the medium by means of which I trade what I produce for what you produce. Under the Currency Principle, the amount of money determines production. Thus, under the Banking Principle you need production in order to have money, while under the Currency Principle you need money in order to have production.
Keynesian economics, therefore, assumes as a given that all financing for new capital investment must come out of existing production: past savings. These by definition belong to the currently wealthy, or to the State if it can create money backed by its own debt, thereby effectively abolishing private property.
In Keynesian economics, it is essential that there be great disparities of wealth, and the more expensive new capital becomes, the greater the disparity must be in order to provide savings for new capital formation and job creation.  Further, in order to ensure that there is enough savings to form capital, wage earners must spend all of their income to purchase unnecessary or unwanted, even useless goods and services in order to generate more profits for the rich.
This is because the presumed need for unconsumed production to provide savings requires unnecessary production . . . which must be sold to turn it into money savings.  The more useless junk people can buy in the Keynesian paradigm, the better the economy runs. Consumer credit is a great boon — for the rich, because it enables people to create money to purchase the excess goods and services, thereby providing the savings Keynes considered essential.
Of course, if new capital formation were financed out of future savings instead of past savings, great wealth disparities, unnecessary production, consumer credit, and a host of other Keynesian fixes would be unnecessary.
That is why, if you want to demonize an economist, you might want to look at Keynes, rather than Adam Smith, Jean-Baptiste Say, or John Weyland.
Or, better yet, don’t demonize anybody, but learn about the Just Third Way.
#30#
Posted by Michael D. Greaney at 6:00 AM