One thing we’ve noticed (i.e., had driven home to us like a railroad spike through the skull) is that quite a large number of people are confused about the difference between a general principle, and a particular application of that same principle.  Yet all the sciences, moral philosophy, and even theology are based in some measure on this distinction.
Take, for example, the science of mathematics.  Euclid’s First Element is, “Things which equal the same thing also equal one another.”  Thus, if 1 + 3 = 4, and 2 + 2 = 4, then you can be absolutely certain that 1 + 3 = 2 + 2, no ifs, ands, or buts.  The general principle, “Things which equal the same thing also equal one another,” is applied in the specific (or “particular”) equations 1 + 3 and 2 + 2.
In moral philosophy, the universal prohibition against theft, i.e., the general norm of the natural law, “Thou shalt not steal” demonstrates that the right to be an owner, “the right to private property,” comes under the natural law.  Why?  Everyone everywhere knows that it is contrary to nature, i.e., “wrong,” to take what does not belong to you.  This necessarily implies that private property is a right by nature, or it would not be wrong to take what does not belong to you.
Proudhon’s “Property is theft” means “property is a violation of property,” which is utter nonsense.  All the socialist and redistributist arguments ever advanced since humanity came down from the trees are based on proving to the satisfaction of the thief that 1) the ostensible owner of what the thief desires doesn’t really own, 2) because the thief is either the real owner, or acting on behalf of the real owner.
The right to be an owner, however, says nothing about any specific system of political economy.  As long as the system respects the dignity of each human person in a way that secures universal access to the means of acquiring and possessing private property in capital, then it conforms to the general norm of the natural law.
We won’t bother with an example from theology.  We’d first have to make the case for the general principle, and then the application, and we’ve already done enough with science and philosophy.
We can — and must — however, deal with the natural right of liberty, also known as freedom of association or contract, which is what started us on today’s brief journey into the murky waters of logic . . . murky, that is, in a day and age that has pretty much rejected reason as the basis for anything.
Freedom sounds very nice — and it is.  Under the name “liberty” it is almost always included in the great triad of natural rights, life, liberty, and private property.
Yes, freedom is a right, but as with every right that ever existed, it is not unlimited . . . in its exercise.
That qualifier is extremely, even vitally important.  Every human being has all natural rights, including life, liberty, and private property, by nature, that is, simply because he or she is a human being.  That means that the right to be alive, to be free, and to be an owner is absolute, inalienable, inherent, unlimited, so on, so forth, etc., etc., etc., no ifs, ands, or buts.
The general norms of the natural law, however, say nothing about how you live your life, what you do with your freedom, or how you use what you own, or what you may own.  All of these constitute exercise of your rights, and they are not absolute, inalienable, inherent, or unlimited at all.  They are very much limited by your individual wants and needs, and those of other individuals and groups, and the common good as a whole.
Thus we say that, while you have the right to be free absolutely, your exercise of that right is limited.  In general, you may not harm yourself, other individuals and groups, or the common good as a whole by the exercise of your right to be free, or by any other right.
And it is this last, harm to the common good, that so many people either misunderstand, or ignore completely. 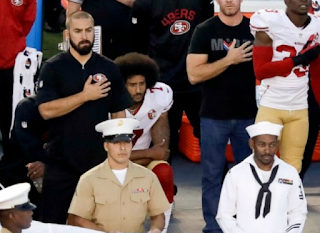 Take, for example, Colin Rand Kaepernick’s refusal to stand for the National Anthem.  Our concern here is not his reason or reasons for doing so.  As an individual, his act harmed only himself — if that.  That is not the point here.  Purely as an individual matter, no one has any right to interfere with that decision.
How about other individuals or groups?  Did Kaepernick harm anyone else by his act?  He certainly offended a number of people, but being offended, despite all the talk of “cultural appropriation,” is hardly a criminal matter, or even reason to do anything other than express disappointment or disagreement, even if only raising an eyebrow.  As an act seen by others in a public forum, he was free to do as he did . . . just as others are free to comment on it, as long as they do not, by that commentary, do harm to Kaepernick or others.
What about the common good?
Now there Kaepernick may have gone over the line.  This is where his exercise of his individual freedom may have violated the laws and characteristics of social justice.  That is what we will look at tomorrow.
#30#
Posted by Michael D. Greaney at 6:00 AM