Another Taxing Question, IV: The Terror of Taxation

Quite a large number of people would tend to agree that the United States should get rid of the Federal Reserve System and the income tax.  We agree with that goal . . . if to “get rid of” is broadly interpreted as getting rid of the incompatible functions that have been added to these essential if exasperating social tools.
The fact is that the problems most people have with these institutions come from the fact that they are being grossly misused.  Nowhere is this more obvious than with the Federal Reserve System, which hasn’t really done what it was designed to do since the inception of the New Deal in the 1930s.
You see, central banks were never intended to finance government, especially by accepting bills of credit: government bonds backed by nothing more than the government’s ability to collect taxes in the future.  Central banks were invented to ensure that private sector mercantile and commercial banks could always get “accommodation,” that is, sufficient credit and reserves to cover the bank and provide sufficient credit to its customers.  A central bank was thus only supposed to be a bank for banks.
How did central banks get into financing governments?  When the Bank of England applied for a charter in 1694, King William III noticed that the “merchant adventurers” had pooled £1.2 million in gold and silver to provide reserves for all the member banks.
Being hard up for cash, Billy said he would grant the charter IF the organizers would hand over all their gold and silver in exchange for “government stock,” i.e., bills of credit.  The “government stock” was “as good as gold” because the government promised to redeem it for gold and silver just as soon as there was a revenue surplus.
The government never actually said when it would redeem the stock, though.  It did, however, eventually take over the Bank of England a few centuries later, making it even less likely that the stock would ever be redeemed.
Thus, what is wrong with the Federal Reserve is the same thing that is wrong with every other central bank in the world of which we have any knowledge: it is in the business of financing government instead of private sector development.
If that’s the case, then why do we need taxation of any kind, including (or especially) the income tax?  As Harold Moulton opined,
If the growth of the public debt is of no moment, one might at first thought be inclined to ask — Why go to all the trouble and expense of collecting taxes?  Why burden the public with ever-increasing levies?  Indeed, if the purpose of fiscal policy is not to balance the budget but to obtain the largest possible “net income-creating” expenditures — as measured by the size of the cash deficit — why not promote the desired end by cancelling all taxes?  (Harold G. Moulton, The New Philosophy of Public Debt.  Washington, DC: The Brookings Institution, 1943, 71.)
Why?  Because as Moulton answered his own question,
That a reorientation of thought with respect to tax policy would be necessary is suggested in a statement already quoted: “Once freed from the obsolete concept of the balanced budget, the larger uses of federal taxes can be creatively explored.” (Ibid., 71-72.) 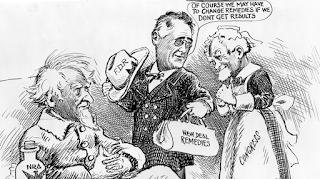 English translation: the government needs taxes to be able to force people to act in ways the government deems desirable.  Take, for example, the tax-fine-whatever imposed on people who fail to purchase health insurance.  Is it a tax?  Is it a fine?  Is it a bribe?
Who cares, as long as people can be forced to do things they ordinarily wouldn’t do?
Of course, we wouldn’t even to raise these issues if the Federal Reserve was used solely for the intended purpose of providing liquidity for private sector development, and the tax system was used solely to raise enough money to run the government.  If the Federal Reserve could create money in ways that creates new owners of capital, and income was taxed in ways that encouraged capital ownership to be as widespread as possible, so much the better.
At the absolute minimum, however, the Federal Reserve should stop financing government, and the tax system should do nothing except raise revenue.  Yes, we’d need that expanded capital ownership as soon as possible, but the first task in any reform is to stop misusing our social tools before we can start to use them properly.
#30#
Posted by Michael D. Greaney at 6:00 AM