As we’ve said on more than one occasion, we like it when people ask us serious questions.  In that category we do not include the “Are-you-still-beating-your-wife?” type.  This is technically known as “the complex question fallacy” because it assumes as a given the answer to a question that has not been asked.  It’s committed when a question is asked (a) that rests on a questionable assumption, and (b) to which all answers appear to endorse that assumption. 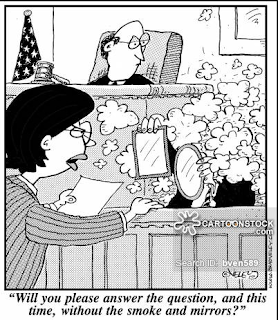 No, we mean honest questions that don’t have an ax to grind, like trying to force us to admit that we’re wrong about the principles of economic and social justice when the questioner hasn’t made any effort to demonstrate that we are, in fact, wrong.  Which, by the way, is another example of the complex question fallacy: “Are you going to admit you’re wrong?”
That’s because answering yes to the question is an admission of guilt, while answering no implies that we are admitting we’re in the wrong, but Just.  Won’t.  Say.  It. . . because we’re just too stupid and stubborn.  No room is left to protest one’s innocence. This is therefore a complex question, and a subtle false dilemma . . . another logical fallacy, by the way, which demands that someone choose between two options as if they were the only options, when there is at least one other option available, e.g., we’ve never beaten our wife, and we’re not wrong, so we can’t admit it.
That’s your logic lesson for the week.  Now on to the question:
What was the inspiration for the Center for Economic and Social Justice?

Good question.  Pioneers of the Employee Stock Ownership Plan (ESOP) and human rights movement had come together in the early 1980s.  They were united in their common commitment to two things.
These were, one, the global vision and economic justice paradigm first advanced in 1958 by ESOP inventor Louis O. Kelso and the “Great Books” philosopher Mortimer Adler.  Two, the concept of social justice as articulated by the scholar Rev. William J. Ferree from the social doctrine of Pope Pius XI.
The philosophy and purpose of CESJ were soon crystallized in written statements of our founding principles and core values. Since the launching of CESJ, members have gathered every month, starting each meeting with a participatory reading of our core values and code of ethics. CESJ’s principles underpin our record of achievement.
And what are the Core Values and Code of Ethics?  We’ll look at the Core Values tomorrow, and the Code of Ethics on Monday . . . assuming nothing bright and shiny pops up to distract us. . . .
#30#
Posted by Michael D. Greaney at 6:00 AM