The American Chesterton, XIV: Problems and Framework for a Solution

As we saw in the previous posting in this series, the two problems Fulton Sheen addressed in God and Intelligence in Modern Philosophy were, one, a new concept of God and religion, and, two, the rejection of the intellect.  Not that either of these two issues is peculiar to the modern age.  As far as the capacity for error goes (especially in religion), the human race has seen very little that is new under the sun.  As Sheen noted,
“The new idea of God has not burst upon the world with the suddenness of a new star.  It has had its antecedents dating back over half a century.  New scientific notions, increased faith in the philosophy of progress, birth of new values and interpretations of life, love of novelty, dissolution of dogmas, each has contributed its share to bring it into being.” (Sheen, God and Intelligence, op. cit., 17.)

Sheen’s “over half a century,” of course, referred only to the immediate antecedents of the situation he addressed in 1925 with respect to Christianity.  In “The Dumb Ox” G.K. Chesterton noted what happened in the Middle Ages.  While Enthusiasm focused on the sixteenth and seventeenth centuries, Msgr. Ronald Knox also recorded new concepts of God and religion that sprang up within a few years of the Crucifixion.

Going back further and outside Christendom, Aristotle had problems with the Sophists.  Even the moment of creation was marked by Lucifer’s rebellion against ultimate Truth — which, according to adherents of the Abrahamic religions, is what caused the whole problem in the first place.

Sheen’s chronology is significant, however.  Half a century puts the immediate beginning of the problems Sheen addressed around 1875.  Three key events in the United States underscore the importance of this time period.

The year 1873 marked the United States Supreme Court’s decision in “the Slaughterhouse Cases.”  According to constitutional scholar William Winslow Crosskey in Politics and the Constitution in the History of the United States (1953), the Court’s intentionally vague opinion in Slaughterhouse nullified the recently adopted Fourteenth Amendment, enshrined in law the belief that sovereignty resides in the State instead of in human beings, and gave the Court virtually unlimited “raw judicial power.”

In 1875 Helena Petrovna Blavatsky founded the Theosophical Society in New York City, and in 1877 published Isis Unveiled: A Master-Key to the Mysteries of Ancient and Modern Science and Theology.  Madame Blavatsky’s doctrines helped spread Hindu and Buddhist concepts in the West, leading to widespread syncretism.  Theosophy was a primary source for other esoteric movements such as Ariosophy (collectivist [Völkische Bewegung] Aryan-esoteric theories that influenced Nazi ideology), Anthroposophy (an offshoot of theosophy that attempted to integrate Christian and natural law elements), and the New Age that merged with an expanded georgist socialism to form Fabian socialism.

In 1879 Henry George published Progress and Poverty, advocating the effective abolition of private property in land through the “single tax.”  The georgist single tax would consist of all rents and other profit of land ownership taken by the State and be applied to public purposes in lieu of all other taxes (cf. Karl Marx, The Communist Manifesto.  London: Penguin Books, 1967, 104).  In this way all economic incentive to own land would be destroyed, and “the State would become the universal landlord without calling herself so.”  (Henry George, Progress and Poverty.  New York: Robert Schalkenbach Foundation, 1935, 406.)

We don’t need to get into a discussion as to whether these were symptoms or causes of the situation Sheen faced.  Personally we think they were symptoms of a much deeper problem: the fact that many people were losing control over their own lives as economic (and thus political) power became increasingly concentrated.  What concerns us here is their significance, the underlying meaning of and commonality among these three events. 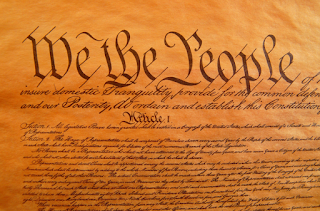 The Slaughterhouse Cases reversed the roles of man and the State in general.  It shifted the source of State power from human beings, to the State itself.  Thus, instead of the original political theory embodied in the Constitution that “We, the People” organize and grant rights and recognition of personality to the State, the new theory was that the State grants rights to people and determines which human beings are persons.  Instead of persons creating the State as in traditional philosophy of law, the State creates persons.

Theosophy reversed the roles of God and human beings.  By claiming that a human being could become a god, an idealized humanity, an abstraction, became divine.  Thomas Hobbes had anticipated this in Leviathan (1651) with his notion that the State is a “Mortall God,” to be obeyed in temporal matters as the Immortal God is obeyed in spiritual matters.  Theosophy, however, dismissed the idea of a Supreme and Perfect Being altogether.  Putting humanity in the place of God inevitably leads to putting the representative of humanity — the State or the collective — in the place of God, vesting it with absolute power.

Georgism reversed the roles of man and the State in particular.  Where Slaughterhouse effectively made all natural, inalienable rights such as life, liberty, and property alienable, socialism made private property alienable.  True, George claimed that this only applied to “the gratuitous offerings of nature” (i.e., whatever had not been produced by human labor, such as land and natural resources), but as transformed by the Fabian Society and, later, by Msgr. John A. Ryan, all private property could be alienated and effectively owned by the State, usually through the tax system.  Since private property is the chief support of, and protection for life and liberty, abolishing private property — even if restricted initially to land — necessarily makes all rights alienable at the discretion of those who own capital, and who consequently have power over others who do not own capital.

The decade of the 1870s was also notable for the actions that the Catholic Church took to address and counter the situation.  In October 1870 the First Vatican Council adjourned, prematurely.  Despite that, two very important definitions came out of the Council.  They were intended to restore common sense to both religious and civil society, “Church and State.”

The first (and better known) was the definition of papal infallibility, or (more accurately) the infallibility of the teaching authority of the pope.  The doctrine of infallibility made clear that religious doctrines — matters of faith and morals — are not subject to anything except objective truth as revealed to humanity by God and interpreted authoritatively by the Catholic Church.

Not so well known is the Council’s declaration of the primacy of the intellect over the will — of human reason as the basis of sound faith and knowledge of God’s existence and of the natural law.  As Pope Pius XII reiterated this nearly a century after its promulgation,

“[A]bsolutely speaking, human reason by its own natural force and light can arrive at a true and certain knowledge of the one personal God, Who by His providence watches over and governs the world, and also of the natural law, which the Creator has written in our hearts.”  (Humani Generis, § 2.)

On his election in 1878, Leo XIII took swift action.  He began applying the common sense that Pius IX had lamented was in decline with his (Pius IX's) first encyclical, Qui Pluribus, in 1846 — no, despite its unique character, Leo XIII's Rerum Novarum in 1891 was not “the first social encyclical” . . . and a good case could probably be made that neither was Qui Pluribus.

On April 21, 1878, then, Leo XIII issued Inscrutabili Dei Consilio: “On the Evils of Modern Society,” notably socialism.  On December 28, 1878 he issued Quod Apostolici Muneris specifically “On Socialism.”  On August 4, 1879 he issued Æterni Patris, “On the Restoration of Christian Philosophy,” which made it clear that “Christian Philosophy” is to be understood as “Aristotelian-Thomism,” which is based on the primacy of the intellect.

This, then, was Sheen’s framework for how to address the twin evils of the new concept of God and religion, and the denial or rejection of common sense.  In the next posting in this series, we’ll give a brief outline of Sheen’s argument.