Fulton J. Sheen opened his first book, God and Intelligence in Modern Philosophy, with the declaration, “Modern philosophy has seen the birth of a new notion of God.”  The new notion is easily expressed.  As Sheen put it, “It brings man into greater prominence.  It exalts him even to the extent of giving him a ‘vote in the cosmic councils of the world.’  It is, in a word, the ‘transfer of the seat of authority from God to man.’”  (Sheen, God and Intelligence, op. cit., 17-18.)  As Sheen went on to explain,


“But what is this new notion of God?  It is God in evolution.  God is not.  He becomes.  In the beginning was not the Word, but in the beginning was Movement.  From this movement God is born by successive creations. . . . Man is a necessary step in the evolution of God.  The divine shows in him as well as in God.  One day it will manifest itself completely.  Just as man came from the beast, God will come from man.  The perfectibility of man implies the manifestation of the divine.  “Men will be like Gods.”  (Ibid., 18.)

This is the sort of thing familiar to readers of E.F. Schumacher’s A Guide for the Perplexed and other New Age tracts.  In New Age thought, there are different levels of consciousness.  By raising his or her consciousness, the enlightened individual can move up the ladder of existence.  Presumably the process is reversed for the un- or dis-enlightened.

Not surprisingly, New Age thought also embodies what Chesterton identified as Siger of Brabant’s principal sophistry, the idea that there are different kinds of truth.  By splitting their heads in two — Siger’s “double mind of man” — people can grasp higher truths that contradict lower truths, or accept some aspect of truth that is somehow more important as truth or more true than other aspects of truth.

What is true in New Age thought, therefore, for someone who has attained enlightenment, is not necessarily true for the Muggles and Mudbloods who remain unenlightened or outside the group of elect disciples of some prophet or other.  As Schumacher put it in what one noted Catholic commentator described as his “wonderful book,” many things that are true at a lower level are nonsense at a higher level, and vice versa — a complete contradiction of the Aristotelian-Thomist unity of the intellect.

That is why Sheen said that the problem is not merely a new conception of God and religion.  It is also a problem of the decline of intelligence, of reason, of common sense — however you want to put it — that is, of the understanding of the concept of truth itself.  As Sheen explained, 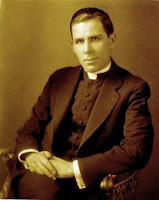 “It is the purpose of this work to examine this new notion of God.  But this problem cannot be adequately treated apart from another problem which is intimately bound up with it.  This other problem is the value of the intelligence.  As men lost faith in the intelligence, they acquired faith in the God of becoming.  The modern God was born the day the ‘beast intellectualism’ was killed.  The day the intelligence is reborn, the modern God will die.  They cannot exist together; for one is the annihilation of the other.”  (Ibid.)

Sheen’s argument in God and Intelligence, then, is very simply stated.  A new idea of God and religion has entered the world; God has been degraded, and man has been raised up in His place.  This was made possible only by the shift from the Intellect to the Will as the basis of faith and reason; common sense declined, and nonsense took over.  Only restoring common sense — reason — can bring sanity back into the world.

The problem that most people today have with understanding what Sheen, G.K. Chesterton, and Msgr. Ronald Knox were trying to do, however, is that they lack fundamentals of a sound philosophy, that is, a concept of truth as necessarily true.  As Maisie Ward described Chesterton’s momentary impulse to yield to the temptation to distort truth or reject something that didn’t fit a preconceived position à la “Cargo Cult Science,” as Richard Feynman termed it (and which reverses the roles of God and man),

“In an interview, given shortly after its [Orthodoxy] publication, Gilbert told of a temptation that had once been his and which he had overcome almost before he realized he had been tempted.  That temptation was to become a prophet like all the men in Heretics, by emphasizing one aspect of truth and ignoring the others.  To do this would, he knew, bring him a great crowd of disciples.  He had a vision — which constantly grew wider and deeper — of the many-sided unity of Truth, but he saw that all the prophets of the age, . . . had become so by taking one side of truth and making it all of truth. . . . He must not, for the sake of being a prophet and of having a following, sacrifice — I will not say a truth already found, but a truth that might still be lurking somewhere.  He could not be the architect of his own intellectual universe any more than he had been the creator of sun, moon and earth.”  (Ward, Gilbert Keith Chesterton, op. cit., 208-209.)

For Sheen, Chesterton, Knox, Mortimer Adler, Heinrich Rommen, etc., etc., etc., of course, understanding the concept of truth meant a solid grounding in Aristotelian-Thomism . . . which Sheen took for granted his readers would have.  As he said,

“There is no purely positive treatment of traditional [Aristotelian-Thomist] doctrines [in God and Intelligence].  All this is presupposed.  This work is merely an emphasis of certain points of view which have an interest for contemporary thought.  It presumes that the Scholastic notions of God, His Nature and His Intelligence, as well as the criteriological and ontological problems of knowledge, have been already treated.  Hence there is no attempt made in the course of this book to treat traditional theodicy in its entirety.”  (Sheen, God and Intelligence, op. cit., 13.)

Sheen then went on to suggest two works for interested readers on the philosophical issues he examined in God and Intelligence to make up for not covering the (to him) basic material . . . both in French originally and both very rare in translation.  The first, Reginald Garrigou-Lagrange’s Dieu, son Existence et sa Nature (“God, His Existence and His Nature”) in two volumes is very expensive if you can even find both volumes in English.  The French is listed as “unavailable.”  The second, Pierre Rousselot’s L’Intellectualisme de St. Thomas, has been out of print in English since 1935, although seems to be fairly reasonably priced in French.

The assumption that the reader already has a basic grounding in the Thomism that provides the framework for Sheen’s examination is the main reason why Sheen’s book should be read after those of Chesterton and Knox.  That is so even though we think it’s evident that Sheen’s work to some extent influenced, and in our opinion probably inspired Chesterton’s “The Dumb Ox” and Knox’s Enthusiasm.

To Chesterton’s and Knox’s books, then, readers might want to add others of a more general nature before cracking Sheen’s.  As is probably obvious, we found Mortimer Adler’s books very helpful, especially Aristotle for Everybody (1979) and Ten Philosophical Mistakes (1985).

Adler, however, also assumed a certain degree of philosophical literacy, and we found that a good introductory text for philosophy came in handy.  The one we used most frequently for quick reference was Daniel J. Sullivan’s An Introduction to Philosophy (1957), which is still in print.  Of course, Father William Ferree’s pamphlet Introduction to Social Justice (1948) with CESJ’s introduction gives a Just Third Way perspective.

Those are the basic issues that Sheen covered in God and Intelligence.  In the next posting in this series we’ll  take a more in-depth look at the basic problems Sheen faced, and then how he addressed them.  After that, with the orientation and intellectual tools we’ve given in this series, it should be possible for a careful reader to get the most out of what is admittedly one of Sheen’s most difficult (but potentially most rewarding) books.