As we noted in the previous posting in this series, Academia was in terrible shape in the 1920s — at least when it came to upholding orthodox Jewish, Christian, and Islamic belief systems and philosophies in a world that seemed to have completely lost its mind, or at any rate its sense of identity.  As Fulton Sheen commented in the Preface to Religion Without God, published in 1928, “Present-day religion is not in evolution, but in revolution.”  As he continued, 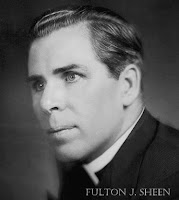 “Evolution implies growth from a germ, revolution a rupture with a principle; evolution has antecedents, revolution knows not its parentage.  When we say that there is revolution in religion, we mean not merely a break with the past, but an abandonment as well of much that is best in the culture and heritage of tradition.”  (Sheen, Religion Without God, op. cit., vii.)

While Sheen was primarily concerned with the aspects of the revolution that resulted in the invention of a new kind of religion in his particular milieux of Church and Academia, the effects — or perhaps battlegrounds — were also evident in popular culture, and the effects were more severe.  In fact, if Academia was inundated with the sort of nonsense Sheen (and Chesterton and Knox) saw in organized religion and the universities, popular culture was worse in many respects.  To paraphrase slightly, “As we live, so we believe.”

In the popular fiction of the period, for example, the turbaned Swami with mystic powers was a standard fixture.  Séances became a socially acceptable way to win friends and influence people — alive or dead.  Having a known (and notorious) historic figure as your spirit guide was almost passé (as well as a bit hazardous if a real historian started asking uncomfortable questions during a session), but (never fear) there were always plenty of 25,000-year old Atlantean and Lemurian sages to go around. 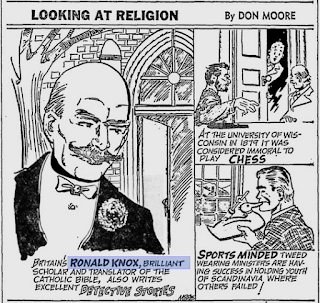 Adventure stories and mysteries began including Tibetan lamas and Mysterious Chinamen as stock characters, and relying on the supernatural as key plot elements.  Msgr. Knox, of course (himself a novelist), rejected such things in his famous “Ten Rules of Detective Fiction.”  It was, nevertheless, almost required to be a theosophist or cult member if you wanted to be an author or artist in certain circles.

For example, “Talbot Mundy” (William Lancaster Gribbon, 1879-1940), a popular novelist, was a theosophist, as his fiction plainly shows.  H. Rider Haggard (Sir Henry Rider Haggard, 1856-1925), author of King Solomon’s Mines (1885) and She: A History of Adventure (1886) was “interested” in Spiritualism, and had a great influence on children’s literature.  So did L. Frank Baum (Lyman Frank Baum, 1856-1919), a member of the Theosophical Society whose children’s books have themselves attained cult status.

Of course, there were novelists who simply used such things because they were popular and in the public mind, and thus useful to make a buck.  The best known of these is probably Edgar Rice Burroughs (1875-1950), the creator of Tarzan.  Burroughs used theosophical themes and beliefs, incorporating them into his stories with a sly humor.  This was possibly as satire or simply as handy plot devices, especially in his Martian novels, which are awash with theosophical concepts.  (See Fritz Lieber, “John Carter: Sword of Theosophy” a 1959 article in George H. Scithers Amra fanzine, although Lieber seemed to assume that Burroughs was a theosophist, rather than just a wholesale borrower of useful gimmicks for his pulp fiction.)

Theosophical elements also show up in some of Burroughs’s Tarzan novels and other works.  Nothing, however, leads one to believe that Burroughs was serious about theosophy.  The fact that his first Martian novel, A Princess of Mars (1912), submitted and first published in All-Story Magazine as Under the Moons of Mars using the pseudonym “Normal Bean” — to indicate he was compos mentis (changed by a typesetter to “Norman Bean”) — suggests that Burroughs was fully aware that theosophy was nothing in which a sane person would become involved.  (See Dale R. Broadhurst, “John Carter: Sword of Theosophy Revisited, ERBzine, http://www.erbzine.com/mag11/1107.html.)

Not that the pervasiveness of the New Age went unchallenged.  The great stage magician and illusionist Harry Houdini (Erik Weisz, 1874-1926), despite later claims that he was involved in the occult, was active in exposing spiritualists and mediums as frauds.  An article Houdini had published in Weird Tales, “The Hoax of the Spirit Lover” (Vol. III, No. 4, April 1924), relates what happened on one occasion when he was called in to expose a charlatan . . . and didn’t get the chance, due to an amazing coincidence — which we won’t spoil for you if you should happen to locate a copy of the article.

There were, of course, authors who were opposed to this movement in popular fiction.  Anna Katharine Green (1846-1935), who is credited with inventing the murder mystery genre and the “series detective” with her bestselling The Leavenworth Case (1878), simply stopped writing.  Green felt that her work did not reflect the taste of readers any longer.  Being a staunch Presbyterian, she refused to write what she regarded as spiritually dangerous tripe.

Robert William Chambers (1865-1933) used spiritualist and theosophical elements in his horror stories, but in such a way as to suggest that he blamed many social and religious problems on their influence, especially among the idle rich and social hangers-on.  He referred to these types as “the Yellow Set,” to distinguish them from the rich who contributed to society in useful ways and people who worked for a living.  Chambers’s classic short story collection, The King in Yellow (1895), featuring a book that drives readers insane, can be interpreted as a devastating critique — it’s a little over the top for good satire — on what Chambers regarded as dangerous New Age-type books as well as the Yellow Set.  His mainstream fiction consistently upholds traditional moral values, especially marriage and family, contrasting what he regarded as normal life with the damage done by gambling addiction, alcoholism, drugs, and, particularly, the growing incidence of divorce.

Knox also got into the act with his rare 1926 novel, Other Eyes Than Ours.  This was possibly due to Knox wanting to warn some of his friends away from their unhealthy interest in such things.  In the novel, a group of spiritualists manage to listen to the “other side” by means of a radio.  They discover that, while the spirits are receiving messages from the material world, the ascended ones have lost all memory of having lived in this plane of existence.  At one point the spirits wonder whether it’s worth their while to respond to messages emanating from what their “Physical Research Group” has termed “séances.”

Not surprisingly, the whole thing turns out to be a hoax.  The novel highlights the insanity of spiritualism, “psychical research,” and all the other themes of theosophy in what has to be one the most surreal satires of the twentieth centuries until Knox pulls off the mask . . . thereby ensuring that the book would be forgotten, as people don’t like to be made fools of, even fictionally.

Perhaps more effectively — as well as directly related to our subject — the villains in G.K. Chesterton’s “Father Brown” stories often rely on asserting some New Age or theosophical phenomenon as the only possible explanation of a crime for which they hope to escape detection.  Naturally, everybody at first accepts this solution until the seemingly prosaic priest exposes it (and the criminal) as a piece of extremely dangerous nonsense — both temporally and spiritually — with the application of a little common sense.

Obviously, from popular culture to politics, and from the temples of religion to the temples of learning, the world of the 1920s was saturated with New Age thought, practices, and beliefs.  Fulton Sheen would have been brought face to face with it on an almost daily basis, and — as an Aristotelian-Thomist as well as a Catholic — would have been appalled.

Unfortunately, New Age thought was joined with a very powerful ally, so to speak: the rise and rapid spread of socialism in reaction against the abuses of capitalism, which we will address in the next posting in this series.